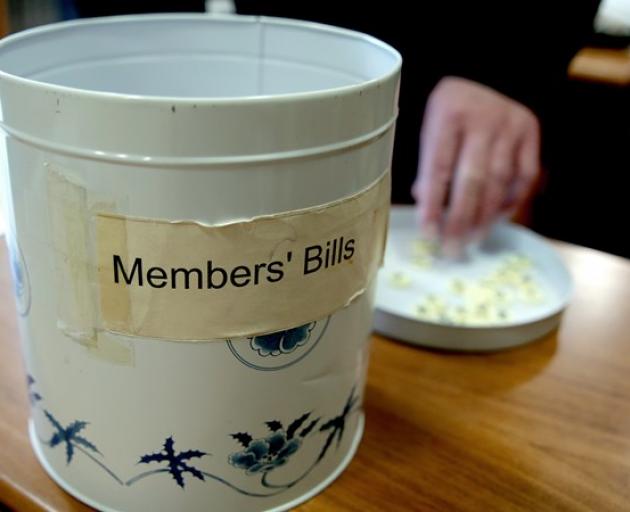 The biscuit tin used to draw members' bills. PHOTO: NEW ZEALAND PARLIAMENT
One of the more charming aspects of New Zealand's Parliamentary system is how proposed member's Bills get chosen - a random ballot, conducted by drawing numbers out of an old biscuit tin.

Some MPs can go for years without seeing their number come up, but some have the darnedest luck ... like Clutha Southland MP Hamish Walker, who as a first-term MP has had not one but two Bills in his name pulled from the ballot.

To put that in perspective, there are 72 proposed Bills in this Parliamentary chook raffle right now.

A draw is only held once member's Bills on the order paper are discharged in some way, either by being withdrawn, voted down, adopted as a Government measure or by actually being passed into law. An average of five member's Bills become law each three-year Parliamentary term.

With around a dozen Member's Days each year, that means there are not that many chances of being drawn.

If you are, though, it can be invaluable publicity and experience for a new MP, such as Dunedin North MP David Clark enjoyed in his first term when he picked up and shepherded the Holidays (Full Recognition of Waitangi Day and Anzac Day) Amendment Bill through Parliament in 2013.

Local National MPs Michael Woodhouse and Jacqui Dean have also succeeded in having member's Bills passed by the House.

But back to Mr Walker, whose KiwiSaver (Foster Parents Opting in for Children in their Care) Amendment Bill will likely be back before the House on May 23, having recently been recommended to be passed, with amendments, by the Social Services and Community select committee.

You might expect him to be pleased, but that is far from the case.

As originally drafted, the Bill would have allowed any foster parent or kin carer to open a KiwiSaver account for a child in their care - the current process is convoluted, requires signatures from multiple persons, and can take years.

Mr Walker wanted to see an estimated 6000 young people able to take a step along the path towards financial independence by being allowed to join KiwiSaver.

However, the Bill has been amended so that only foster parents who have committed to a long-term carer arrangement can enrol their ward in KiwiSaver - a change which Mr Walker believes will see the proposed law change benefit only about 600 people.

The argument for the committee's amendments is that a temporary carer might not be the best person to make long-term financial commitments for a young person they may only just have taken under their wing, especially if those care arrangements are temporary.

Hence, when the Bill returns, Mr Walker will be in the novel position of trying to amend his own Bill to put it back the way he intended in the first place.

Should he fail, he will probably find himself voting "Aye" but through gritted teeth for the Bill to progress further, on the basis that something is better than nothing.

How the KiwiSaver Bill fares, only time will tell.

But if it gets voted down, Mr Walker can take some comfort from the fact that he will be back in front of the House later this year, asking it to approve his High-power Laser Pointer Offences and Penalties Bill.

The wheels of power

Who says Parliament takes too long to make decisions?

On Wednesday the Health select committee considered the 2014 petition of Dr David Clark MP, which called on the Government to begin construction work on the Dunedin Hospital rebuild before the 2017 general election.

Given that Dr Clark is now Minister of Health and announced the future Dunedin hospital site in May 2018, the five minutes the committee scheduled for the petition was probably four minutes too many.

As predicted last week, Regional Development Minister Shane Jones was indeed asked a question in the House on Tuesday about his visit to Gore, and the $3.7million of Provincial Growth Fund money he spent there.

"There are also the developments and the upside of the Hokonui Moonshine Museum, which celebrates the heritage of certain South Islanders hiding in the hills, away from the tax department, and making whisky," Mr Jones said.

"That new distillery wing and the construction of a new Maruawai heritage centre will speak volumes about the heritage of a number of the South Island MPs."

Credit where it is due

This is indeed thrilling news ... but it might have been nice if somewhere, anywhere, in Mr Walker's release he acknowledged that this was a member's Bill in the name of New Zealand First MP Mark Patterson.