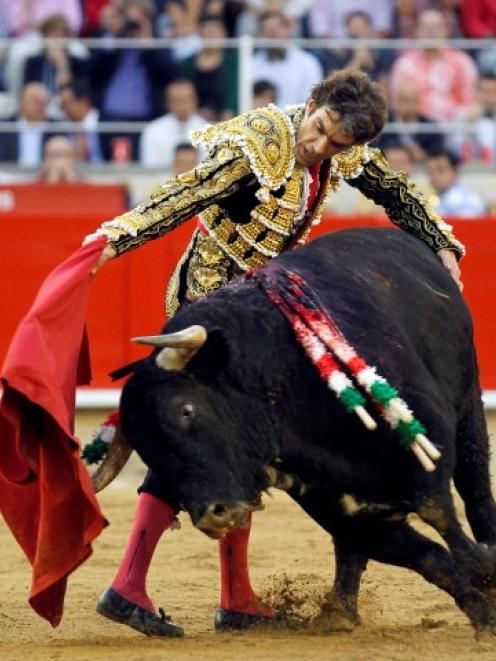 But the victory belonged to opponents of the "corrida", who had successfully campaigned for the emblematic Spanish spectacle to be banned in the Catalonia region.

It was a day of high emotion in the separatist-inclined Catalan capital, Spain's second city.

All 20,000 seats in the historic La Monumental arena were sold out in advance and touts were charging 1600 euro for tickets, three times the face value of the top price

The event marked an impassioned debate over bullfighting which has highlighed political, cultural and economic divisions in modern Spain.

Fans, a number of whom had come from abroad, lamented the ban and said it was stifling tradition and people's rights.

"This is like a dictatorship. We don't do anything wrong to anyone and we are banned from having a 300 year-old show,"Josep Navarro, 60, a longtime fan, told Reuters.

But opponents celebrated the last day of "death in the afternoon" in Catalonia and said they would push their campaign for other regions to follow.

Hundreds of anti-bullfight protesters gathered outside the bull ring carrying posters reading "RIP", "Goodbye" and "A great day for the bulls" under the watchful eyes of squads of police.

"It is a small victory, but the thought of having it in the rest of Spain and still having Correbous (local fiestas) here does not make me happy. I am here because six animals are going to be tortured here today," said an anti-bullfighting activist who gave his name as Luis.

The law banning bullfighting in autonomous Catalonia was passed by the regional parliament in July last year after a citizens' petition. It comes into effect in January but Sunday was Barcelona's farewell as it is the end of the season.

Though driven by animal rights activists, many commentators see it as part of Catalonia's desire to distance itself from culture rooted elsewhere in Spain.

Fans view the spectacle as a deadly art, and it has inspired artists such as painters Goya and Picasso and poet Federico Garcia Lorca.

But critics say the bullfight, in which three matadors in turn face six half-tonne bulls in a ritual which ends with the animal being killed by a sword thrust, amounts to torture and has no place in a modern society.

Its popularity is dwindling in Spain, although it retains loyal followings in Anadalusia, Madrid, the Basque country and some other parts of the country as well as southwest France.

Still, Jose Tomas, considered one of the greatest matadors ever, galvanised the crowd on Sunday. He was awarded two ears from the first of two bulls from El Pilar ranch that he fought.

Known for his courage, Tomas only recently returned to the ring after a goring in Mexico last year that nearly killed him and he was estimated to be paid 350,000 euros for this corrida.

The last matador to face a bull in Sunday's corrida was himself a Catalan, Serafin Marin.

Speaking in his hotel room before the fight, as assistants dressed him in his skin-tight "suit of lights", he told Reuters: "Let's hope we can have bullfighting in Barcelona in 2012."

Tomas, Marin and Juan Mora, the third matador on the bill, were carried out on the shoulders of the crowd afterwards.

"Seldom have we seen a taurine spectacle with so much passion, but with emotion and rage, protest and impotance, nostalgia and even some hope," state news agency EFE said.

Despite the fervour for this weekend's bullfights, ticket sales in Barcelona have usually not half-filled the arena.

The Catalonian Bullfighting Federation collected signatures for a petition against the ban. The opposition Popular Party is also in the process of appealing against it on the grounds it is unconstitutional and an attack on Spanish culture.