Fears of second outbreak in US, Europe 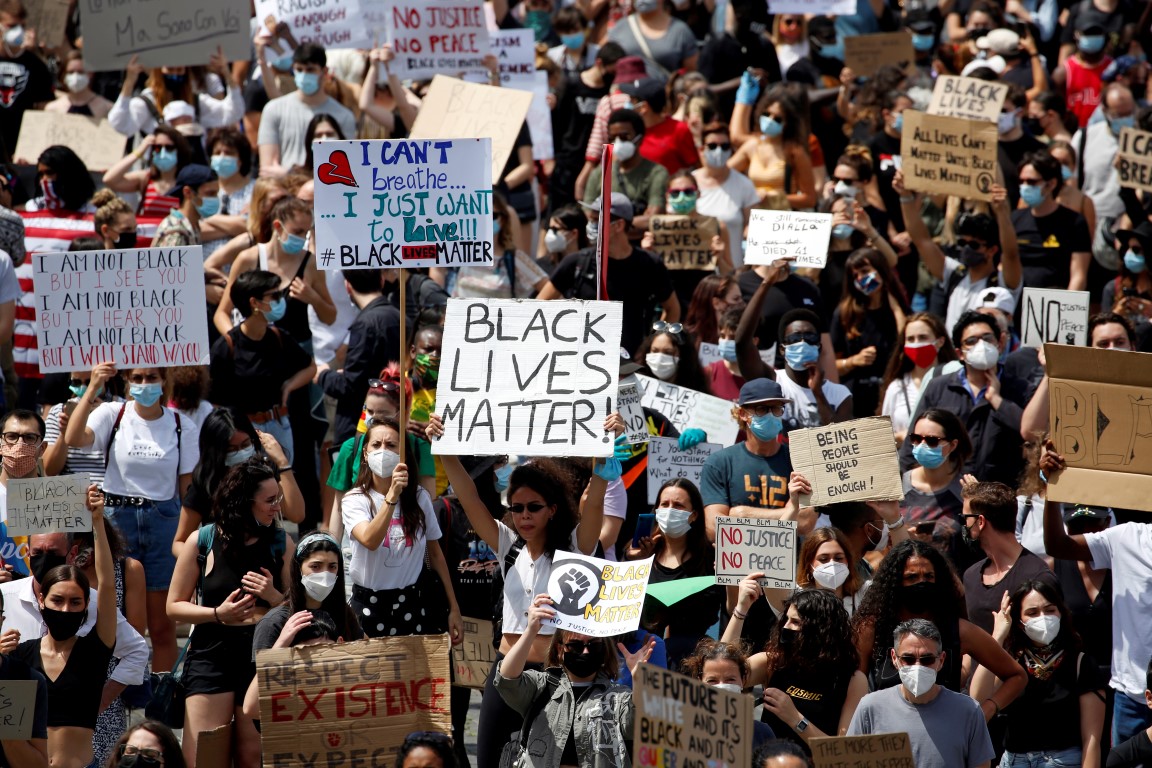 Demonstrators in Rome attend a protest against racial inequality in the aftermath of the death in Minneapolis police custody of George Floyd. Photo: Reuters
Europe could face a surge of Covid-19 infections in the coming weeks caused by mass protests in the continent over the last days, politicians, EU officials and experts say.

Tens of thousands of protesters have crowded together in Europe's big cities in recent days to demonstrate against racism after the killing in the United States of George Floyd while in police custody.

"If you advise everybody to keep one and half meter from each other, and everybody just stands next to each other, holding each other, then I don't have a good feeling about that," Jozef Kesecioglu, who chairs the European Society of Intensive Care Medicine, told a conference.

Asked whether there could be a surge of infections in the coming two weeks, he said: "Yes, but hopefully I'm wrong."

"I understand that people want to show their passion for a cause that they care deeply about. But this is a virus that thrives on social contact, regardless of what your cause may be," he said at a daily news conference.

Most European countries have passed the peak of the outbreak and are gradually reopening business and borders, as infections went gingerly down in past weeks.

Before recent protests, scientists expected a second wave only after the summer. But mass gatherings might impact this positive trend.

Having only recently emerged, it is not yet clear how Covid-19 is affected by seasonal factors and people spending more time outdoors, where the virus particles disperse faster, potentially helping limit its spread.

However, the positive impact of being outdoors could be counteracted if social distancing is not adhered to.

"As for any infectious respiratory disease, mass events could be a major route of transmission," Martin Seychell, a health official at the EU Commission told Reuters when asked about the possibility of an earlier second wave caused by demonstrations.

The virus was still circulating, although at lower rates than some weeks ago, he said.

The likelihood and size of a second wave would depend on the effective maintaining of social distancing measures and other factors, many of which are still unknown, he said.

"A second wave or recrudescence is not certain but possible," he said. 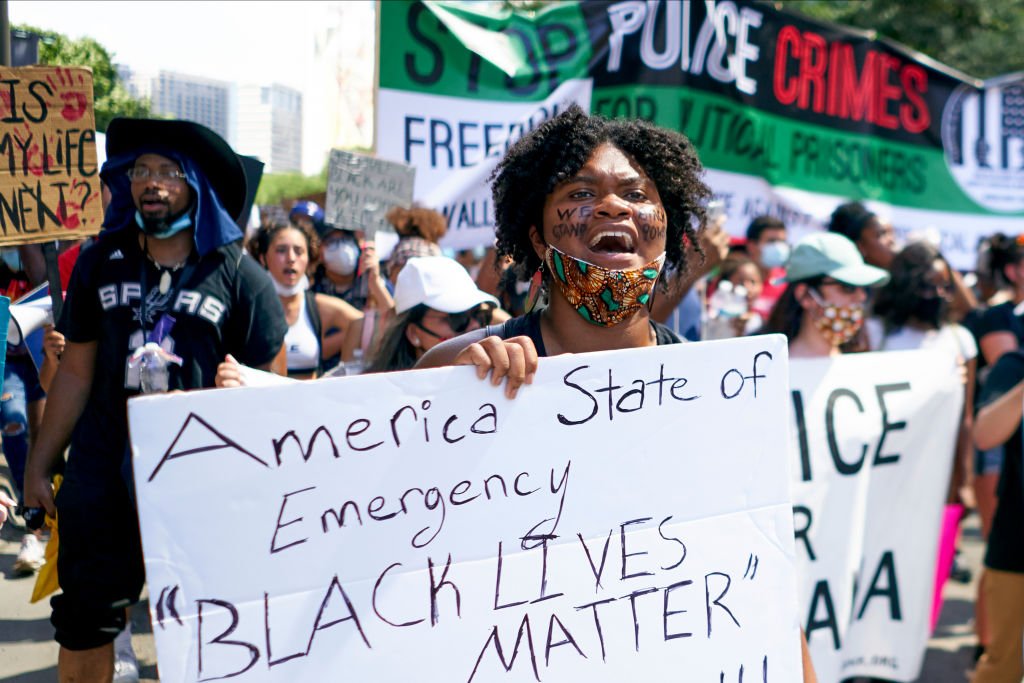 Demonstrators march in Dallas, Texas during a protest against police brutality and racism. Photo: Getty
US fears

Meanwhile, about half a dozen American states including Texas and Arizona are grappling with a rising number of coronavirus patients filling hospital beds, fanning concerns that the reopening of the US economy may spark a second wave of infections.

The rally in global stocks came crashing down on Thursday (local time) over worries of a pandemic resurgence. The last time the S&P 500 and Dow fell as much in one day was in March, when US coronavirus cases began surging.

A recent spike in cases in about a dozen states partially reflects increased testing. But many of those states are also seeing rising hospitalizations and some are beginning to run short on intensive care unit (ICU) beds.

Texas has seen record hospitalizations for three days in a row, and in North Carolina only 13% of the state's ICU beds are available due to severe Covid-19 cases. Houston's mayor said the city was ready to turn its NFL stadium into a make-shift hospital if necessary.

Arizona has seen a record number of hospitalizations at 1,291. The state health director told hospitals this week to activate emergency plans and increase ICU capacity. About three-quarters of the state's ICU beds are filled, according to the state website.

“You’re really crossing a threshold in Arizona," said Jared Baeten, an epidemiologist at the University of Washington. "The alarming thing would be if the numbers start to rise in places that have clearly already peaked and are on their downtrend," he said, referring to New York and other Northeastern states where new cases and deaths have plummeted.

Health experts worry there could be a further rise in infections from nationwide protests over racial injustice and police brutality that packed people together starting two weeks ago.

Arizona, Utah and New Mexico all posted rises in new cases of 40% or higher for the week ended June 7, compared with the prior seven days, according to a Reuters analysis. New cases rose in Florida, Arkansas, South Carolina and North Carolina by more than 30% in the past week.

"We also as a whole have been going down with cases," Fauci said. "But I think what you mentioned about some states now having an increase in the number of cases makes one pause and be a little bit concerned."

Even if hospitals are not overwhelmed by coronavirus cases, more hospitalizations mean more deaths in the coming weeks and months, said Spencer Fox, research associate at the University of Texas at Austin.

"We are starting to see very worrying signs about the course the pandemic is taking in cities and states in the US and around the world," he said. "When you start seeing those signs, you need to act fairly quickly."

Total US coronavirus deaths are now over 113,000, by far the most in the world. That figure could exceed 200,000 at some point in September, Ashish Jha, the head of Harvard's Global Health Institute, told CNN.

Jha said the United States was the only major country to reopen without getting its case growth to a controlled level - defined as a rate of people testing positive for the coronavirus remaining at 5% or lower for at least 14 days. Nationally, that figure has been between 4% and 7% in recent weeks, according to a Reuters analysis.

Health officials have stressed that wearing masks in public and keeping physically apart can greatly reduce transmissions, but many states have not required masks.

"I want the reopening to be successful," Harris County Judge Lina Hidalgo, the top executive for the county that encompasses Houston, told reporters. "But I'm growing increasingly concerned that we may be approaching the precipice of a disaster."

This form of assembly during a Covid 19 lockdown or part lockdown, in a country with high infection, is madness. It makes a laughing stock of the millions of law abiding citizens, individuals and families who have made enormous sacrifices to business and income, possibly even facing redundancy while observing the rules, in some cases unable even to continue feeding their families, or gather for funerals, because they stayed in and obeyed the rules. While vast swathes of people march in violation of the rules with zero concern of spreading the virus. The fact governments have not intervened in response to these marches, simply illustrates that certain political movements or emotive causes are clearly free to exploit the rules with impunity. Covid infection has already been detected in a few who have attended these rallies. Maybe it might take a dose of Covid for some of those protesting to realize that Western civilization is not really that evil, when your being kept alive and nursed back to health by the advances of Western medicine.