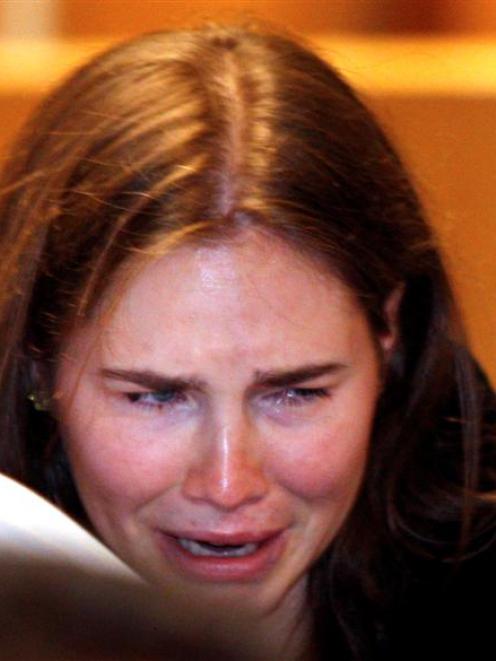 Amanda Knox reacts as she hears that she has been cleared of murder. REUTERS/PierPaolo Cito/Pool
Amanda Knox and her former boyfriend left prison today after four years when an Italian appeals court cleared them of the 2007 murder of British student Meredith Kercher.

Seattle native Knox and Italian computer student Raffaele Sollecito, had appealed against a 2009 verdict that found them guilty of murdering the 21-year-old Kercher during what prosecutors had said was a drug-fuelled sexual assault four years ago.

A whoop of joy was heard in the court as the ruling overturning their sentences was read out but Knox herself broke down and was led out sobbing and supported by police officers.

"As you could see from the images, Amanda was a nervous wreck who just collapsed. She wasn't able to say anything other than 'thank you' in a flood of tears," one of her lawyers, Maria Del Grosso, told reporters.

Speaking to a crowd outside the courtroom, Knox's sister Deanna thanked her legal team and supporters.

"We're thankful that Amanda's nightmare is over. She suffered for four years for a crime she did not commit," she said. "We are also thankful to the court for having the courage to look for the truth and to overturn the conviction."

The verdict, a severe embarrassment to the Italian justice system, came after independent forensic investigators sharply criticised police scientific evidence in the original investigation, saying it was unreliable.

Kercher's half-naked body, with more than 40 wounds and a deep gash in the throat, was found in 2007 in the apartment she shared with Knox in the Umbrian hill town of Perugia where both were studying.

Both Knox and Sollecito, 27, consistently had maintained their innocence throughout the original investigation and trial. A third man, Ivorian drug dealer Rudy Guede, was imprisoned for 16 years for his role in the murder.

Knox returned briefly to the Perugia jail where she had been held to complete formalities before being driven away to an unknown destination in a black Mercedes with shaded windows.

She is expected to return to the United States, although it was not immediately clear whether she would be returning on a regular flight or on a private plane.

Sollecito, who had been held in a separate jail near Perugia, also left custody but his lawyer refused to say where he would be spending his first night of freedom.

"It was obvious that he had nothing to do with the death of that poor girl," Sollecito's father, a doctor, said after the verdict which he said had "given me back my son".

The court upheld a conviction against Knox for slander, after she had falsely accused barman Patrick Lumumba of the murders. It sentenced her to three years in prison, a sentence which she has now already served.

The verdict left many questions regarding the murder open and Kercher's family members sat stunned in the court long after the others had left. Meredith's sister Stephanie was in tears.

"We respect the decision of the judges but we do not understand how the decision from the first trial could be so radically overturned," the Kerchers said in a statement released through the British embassy.

"We still trust the Italian judicial system and hope that the truth will eventually emerge."

Knox's lawyer Carlo Dalla Vedova said his client would be marked by the case for life and by the memory of her friend Meredith but wanted to get back to normal life.

The appeal trial gripped attention on both sides of the Atlantic, with an outpouring of sympathy and outrage from many in the United States who saw the American as an innocent girl trapped abroad in the clutches of a medieval justice system.

Supporters celebrated in Knox's home town of Seattle, shouting in triumph as the verdict was carried live on television.

"When I knew her she was kind, hard-working and a team player. There was not a mean bone in her body," he said, wiping away tears with a tissue.

"The United States appreciates the careful consideration of this matter within the Italian judicial system," she said.

A powerful lobbying campaign by her family played a big part in changing perceptions of Knox from the promiscuous "Foxy Knoxy" of early media reports and the cold-blooded, sex-obsessed "she-devil" portrayed by prosecutors.

But the verdict was not universally welcomed and outside the court hundreds of people whistled, booed and shouted "Shame, shame" and "bastards" at the courtroom and at US TV crews.

During the appeals trial Knox's plight in jail dominated much of the reporting, leaving Kercher's family feeling that the real victim of the crime had been pushed to one side.

"Mez has been almost forgotten in all of this," her sister Stephanie said before the verdict, as the family emphasised that the brutality of the crime must not be forgotten.

Kercher, a Leeds University student from Coulsdon in Surrey, was on a year-long exchange programme in Perugia when she was murdered, bringing a flood of unwelcome attention to the medieval town in central Italy that her family said she loved.

The murder investigation showed she was pinned down and stabbed to death and evidence suggests that Guede did not act alone, although Monday's verdict left it unclear who else might have been involved.

The experts also said alleged traces of Sollecito's DNA on the Briton's bra clasp may have been contaminated.

The defence argued that no clear motive or evidence linking the defendants to the crime had emerged, and said Knox was falsely implicated in the murder by prosecutors determined to convict her regardless of the evidence.