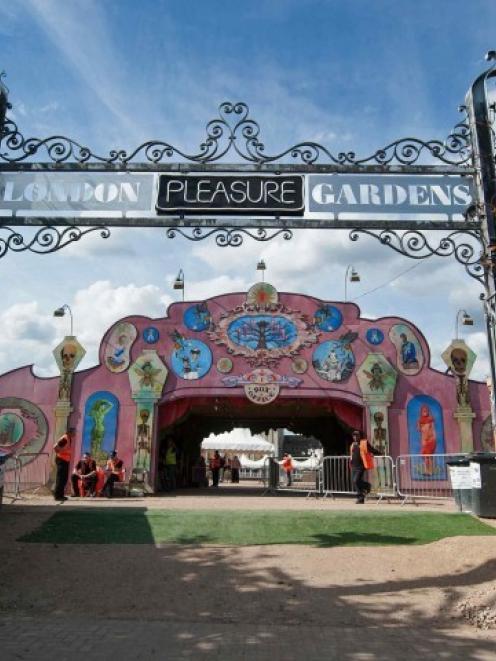 Harnessing public enthusiasm for the Olympics, organisers aimed to create a reincarnation of the cultural amusement parks of the 18th and 19th centuries on the scruffy 20 acre site.

But the reality is markedly different, with half of the east London festival site shut and even the open half verging on empty.

Reasons for the shortcomings are various, but appear to stem from the expense and time needed to clean up the post-industrial site, and from visitor restrictions imposed over the Olympic period.

Apart from a short statement on the visitor limits, the gardens' management said they were too busy to respond to repeated requests for comment.

Co-director Deborah Armstrong, who quit the project this week, said she did not feel that the team's original vision was being followed.

"Hopefully the road will swing toward it again at some point," Armstrong, who is also the organiser of a dance and performance area at the Glastonbury festival, said in a personal blog post.

Disappointed traders say the Gardens are in part a victim of London's "Olympic effect", whereby visitors have been deterred by warnings to avoid attractions and the capital's public transport during the Games.

"No one's been buying anything, they're just walking straight past," said stall owner Sushil Bhandari as he arranged some Nepalese beaded bracelets on otherwise untouched racks.

In addition, budgeting issues and a string of cancelled and downsized events have dampened plans by regeneration chiefs to showcase the former industrial wasteland this summer.

London Pleasure Gardens was due to open to the public last weekend, with free entry to all, a big screen showing the Games and a programme of theatre, live music and cabaret.

But restrictions on visitor numbers during the Olympics have left the open half of the site - a dusty, barren stretch with bars, tents and food stalls - all but empty.

Access has been limited to Olympic ticket holders from the ExCel centre, a major Games venue, and some local residents.

"(Games organiser) LOCOG have given London Pleasure Gardens a daily limit of 2,500 local residents who can visit the site during the Olympic period to alleviate extra strain on the transport system," the venue's management said.

Across the water, are the outlines of the run-down Millennium Mills and a huge grain silo, bearing testimony to the docks' industrial heritage. A nearby boat intended to be a floating cocktail bar sits abandoned.

The only green spaces, a large grassy mound and an overgrown meadow intersected by winding paths, are closed because the forecast revenue did not cover their operational costs, according to the site's managers.

Visiting the site with his wife and two sons, taxi driver Jim Palmer said that he was disappointed.

"We thought there would be more here. I'm glad it didn't cost anything," Palmer said.

The site has hosted ticketed events for more than a month, but there have been several setbacks.

On July 6, the second weekend the site was open, British electronic music festival Bloc, with headline acts including U.S. rapper Snoop Dogg, was forced to close around midnight on its first night due to overcrowding and ticketing issues.

The company behind Bloc has since gone into administration.

Three large music events scheduled to take place at the Gardens, one in mid-July and two in August, have been forced to relocate due to concerns the site would not be ready in time.

The main venue, a 2,800 capacity soundproof space, is still unfinished.

The site was conceived by Garfield Hackett, an east Londoner involved in numerous successful arts projects, and Armstrong and Robin Collings, the team behind Shangri-La, a popular immersive experience area at the Glastonbury festival.

Funded by a 3 million pound ($4.7 million) loan from local authority Newham council, the project is one of several intended to regenerate the capital's docklands spawned by Meanwhile London, a competition backed by Mayor of London Boris Johnson.

Newham council said it remained confident that the Gardens would fulfil their purpose in the long term.

"Anything that helps to regenerate what was a previously derelict and polluted site is welcome," a council spokesman said. "Glastonbury wasn't built in a day."

But for some visitors, the bleak aesthetic is a positive.

"It's really, really good: we're definitely going to come back," said 39-year-old Kim Barlow-Leak as she sat by a deserted bar on the site with her husband.

"We live in (nearby) Bow but had no idea it was here. I love the festival atmosphere - and the fact that there's lots of empty space."