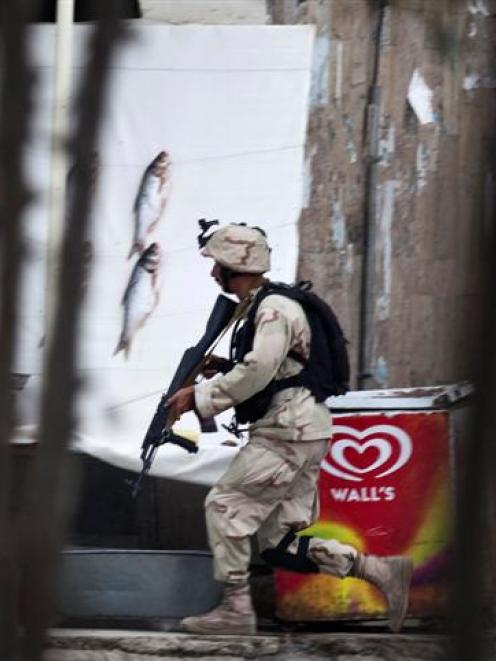 An Afghan counter terrorism personnel runs towards the building which the Taliban insurgents took over during an attack near the US embassy in Kabul. REUTERS/Ahmad Masood
Taliban fighters have fired rockets at the US Embassy and NATO headquarters in Kabul and attacked police in three other areas in the biggest assault the insurgent group has mounted on the Afghan capital.

At least 9 people were killed and 23 wounded in the four attacks, and a gun battle around a half-built high-rise building raged on into the evening as NATO and Afghan attack helicopters circled overhead.

The fighters had chosen a strategic and heavily fortified main target for the well-coordinated attacks.

Their ability to shower artillery around the diplomatic district was a clear show of strength at a time when NATO-led forces are claiming significant security gains and preparing for their exit by 2014.

Although the Taliban have attacked multiple targets in Kabul in the past, this is the first time they have organised simultaneous assaults on such separate areas.

"The scale of today's attack is unprecedented," said Andrew Exum, fellow at the Center for a New American Security.

"There was almost certainly either a break-down in security among the Afghans with responsibility for Kabul or an intelligence failure."

A squad of about five insurgents took over a shopping centre under construction on the outskirts of Kabul's diplomatic district armed with rocket-propelled grenade launchers, AK-47s and suicide vests.

Explosions were interspersed with gunfire all afternoon and several rockets landed in upmarket Wazir Akbar Khan district, near the British and other embassies. One hit a school bus but it appeared to have been empty at the time.

The gun battle around Abdul Haq square went on into the early evening, with three attackers killed and one or two still at large nearly eight hours after the assault began, the Interior Ministry said.

Journalists from Radio Television Afghanistan and Iran's English-language Press TV channel were among the wounded.

Hundreds of students from two schools were stuck near the site of the attack and terrified parents rushing to rescue their children were stopped by security forces. Children cried as parents fought to get near, and two women fainted.

Four Afghans who had been waiting for visas were also wounded by rocket-propelled grenades during the attack on the U.S. Embassy compound, embassy spokeswoman Kerri Hannan said.

The U.S. and British embassies and the NATO-led coalition said all their employees were safe.

In western Kabul, a few kilometres away, a suicide bomber detonated explosives at a police building, killing a policeman and wounding two. A second bomber killed a civilian at a regional police centre and wounded four.

And at a road near the airport, a suicide bomber was killed by police and 7kg of explosives were seized, the Kabul police chief said in a statement.

The Taliban claimed responsibility, saying they aimed to support the attackers near the embassy district.

"We attacked convoys of police as they were sending reinforcements to Abdul Haq Square," spokesman Zabihullah Mujahid said by phone from an undisclosed location.

Violence is at its worst since US-backed Afghan forces toppled the Taliban government in late 2001, with high levels of foreign troop deaths and record civilian casualties

The assault was the second big attack in the city in less than a month after suicide bombers targeted the British Council headquarters in mid-August, killing nine people.

In late June, insurgents launched an assault on a hotel in the capital frequented by Westerners, killing at least 10. But Tuesday's attack was even more ambitious.

"This incident is one of the rare occasions that militants have demonstrated the capability to get extremely close to the heart of the Western military and intelligence presence," global intelligence consulting firm STRATFOR said.

"The ability to get numerous operatives armed with explosives and heavy guns into this area could not have been possible without the Taliban obtaining aid from Afghan security personnel posted in high-security areas."

NATO Secretary-General Anders Fogh Rasmussen said the assaults were aimed at thwarting plans to hand over security to Afghan forces but they would not succeed.

U.S. President Barack Obama has announced a plan to start pulling U.S. troops out of Afghanistan and all foreign forces there have agreed to transfer security responsibilities to Afghan forces and head home by the end of 2014.

U.S. Secretary of State Hillary Clinton said the attacks would not deter the United States and its Afghan allies.

"We will be continuing with even greater commitment to doing all we can to give the Afghan people who have suffered so much a chance at a better future," she told reporters.

Afghan President Hamid Karzai said the attacks would only stiffen the resolve of Afghan security forces.

"They will give...more determination to Afghan forces on their way toward taking on more responsibility," Karzai said.