UK ministers poised to oust May amid Brexit chaos 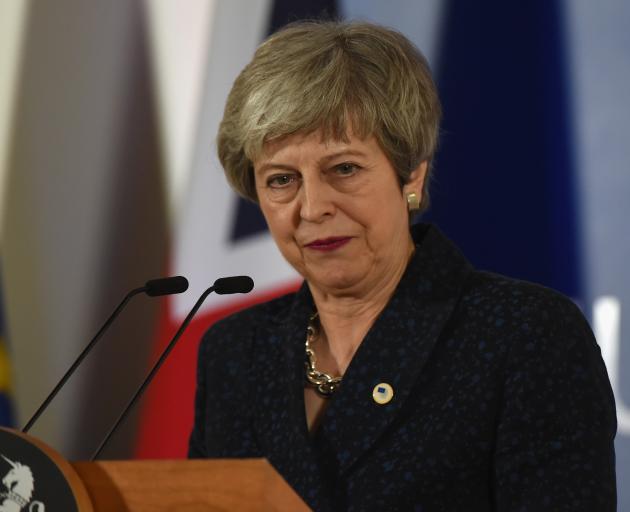 Tory party ministers have reportedly lost faith in Theresa May's ability to negotiate a Brexit deal. Photo: Getty Images
British Prime Minister Theresa May's top ministers are moving to oust her within days, The Sunday Times reported, as her Brexit strategy lay in tatters just weeks before the United Kingdom was due to leave the European Union.

If May is toppled, Brexit would be thrust into doubt. It is unclear how, when and even if the United Kingdom will leave the EU.

May, who voted to stay in the EU and won the top job in the chaos following the 2016 referendum, had vowed to deliver Brexit but she undermined her premiership with a botched snap election in 2017 which cost her party its parliamentary majority.

The Brexit divorce deal she struck with the EU in November has been overwhelmingly rejected twice by British lawmakers.

The Sunday Times cited 11 unidentified senior ministers and said they had agreed that the prime minister should stand down, warning that she has become a toxic and erratic figure whose judgment has "gone haywire".

"The end is nigh. She will be gone in 10 days," the Sunday Times quoted an unidentified minister as saying. 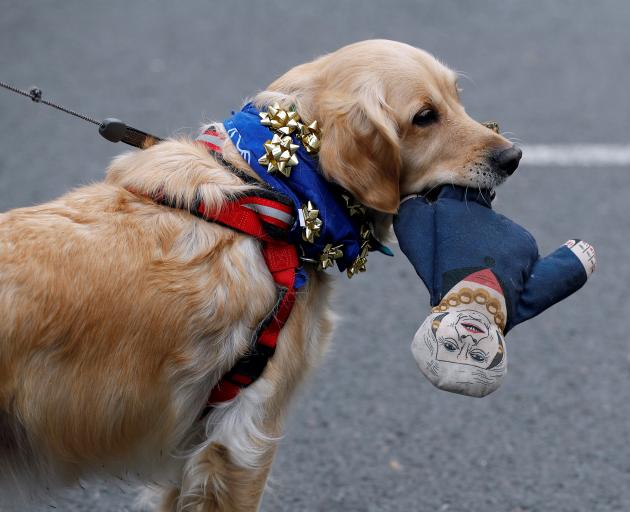 A dog holds a doll depicting Britain's Prime Minister Theresa May as EU supporters, calling on the government to give Britons a vote on the final Brexit deal, participate in the 'People's Vote' march in central London. Photo: Getty Images

"Her judgment has started to go haywire. You can't be a member of the cabinet who just puts your head in the sand," the newspaper cited a second unidentified minister as saying.

The Sunday Times reported that May's de-facto deputy, David Lidington, is one contender to be interim prime minister but others are pushing for Environment Secretary Michael Gove or Foreign Secretary Jeremy Hunt.

The Mail on Sunday reported that Gove was the consensus candidate among cabinet ministers who believe Lidington is too pro-EU. But eurosceptic lawmakers also expressed scepticism about the Leave-backing Gove.

The Sunday Telegraph reported that former education minister Nicky Morgan, who voted remain, was popular among several prominent pro-Leave lawmakers as a "unity candidate" to succeed May.

Earlier a Downing Street source, speaking on condition of anonymity, told Reuters that a Saturday Times report that there were discussions in May's office about her departure was incorrect.

Betting odds indicate there is now a 20 percent chance that May will be out of her job by the end of this month, Ladbrokes said on Saturday.

Brexit had been due to happen on March 29 before May secured a delay in talks with the European Union on Thursday.

Now a May 22 departure date will apply if parliament rallies behind the British prime minister next week and she is able to pass her deal. If she fails to do so, Britain will have until April 12 to offer a new plan or decide to leave the European Union without a treaty.

Hundreds of thousands march in London for new Brexit vote 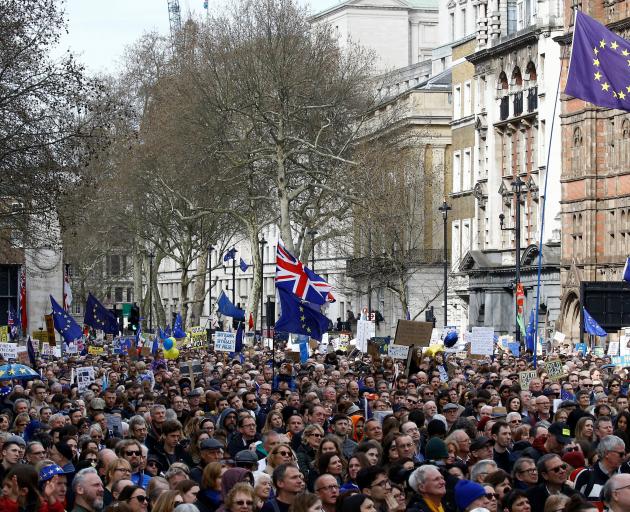 EU supporters, calling on the government to give Britons a vote on the final Brexit deal, participate in the 'People's Vote' march in central London. Photo: Reuters
Hundreds of thousands of people opposed to Britain's withdrawal from the European Union marched through central London on Saturday to demand a new referendum as the deepening Brexit crisis risked sinking Prime Minister Theresa May's premiership.

After three years of tortuous debate, it is still uncertain how, when or even if Brexit will happen as May tries to plot a way out of the gravest political crisis in at least a generation.

Marchers set off in central London with banners proclaiming "the best deal is no Brexit" and "we demand a People's Vote" in what organisers said was more than one million people strong and the biggest anti-Brexit protest yet.

"I would feel differently if this was a well-managed process and the government was taking sensible decisions. But it is complete chaos," Gareth Rae, 59, who travelled from Bristol to attend the demonstration, told Reuters.

"The country will be divided whatever happens and it is worse to be divided on a lie."

While the country and its politicians are divided over Brexit, most agree it is the most important strategic decision the United Kingdom has faced since World War Two.

Thousands of pro-EU protesters gathered for the "Put it to the people march" at Marble Arch on the edge of Hyde Park around midday, before marching through the landmarks Picadilly Circus and Trafalgar Square and past the prime minister's office in Downing Street to finish outside parliament.

March organisers estimated that more than one million people turned out for the march, exceeding a similar rally held in October, when supporters said about 700,000 people turned up.

It was not possible to independently verify the figure, although a Reuters reporter said the march was so busy that some of the crowd had to be diverted off the main route. Police declined to give an estimate on the number of protesters.

The one million estimate would make it London's second biggest demonstration after a rally against the Iraq War in February 2003, which organisers said close to 2 million people attended.

"NEVER GONNA GIVE EU UP"

A range of politicians, including from the governing Conservative Party, addressed a crowd, which packed out Parliament Square and left some unable to get near.

Among them was Labour's deputy leader Tom Watson, who swung behind a People's Vote on May's deal despite party leader Jeremy Corbyn's reticence on the issue, and Scottish National Party leader Nicola Sturgeon.

Phoebe Poole, 18, who was holding a placard saying "never gonna give EU up" in reference to a song by 1980s popstar Rick Astley, was not old enough to vote in the 2016 referendum.

"We have come here today because we feel like our future has been stolen from us. It is our generation that is going to have to live with the consequences of this disaster," she told Reuters.

"It is going to make it harder to get a job. You are already seeing a lot of large companies leaving. I am worried about the future." 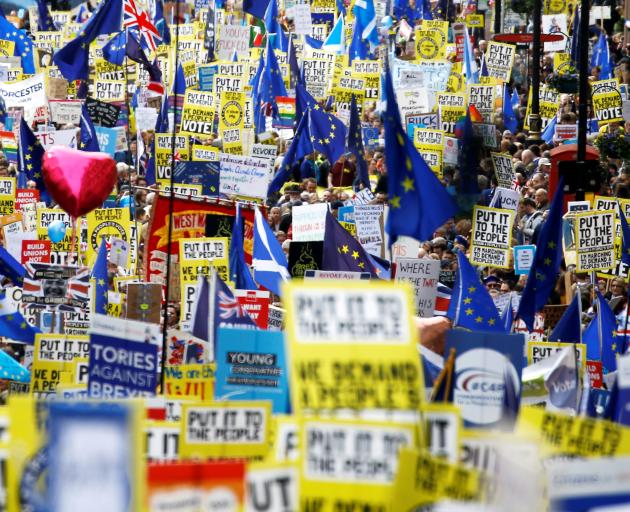 Protesters from acorss Britain filled the streets of London to demand a second vote on Brexit. Photo: Reuters
Two hundred coaches from around Britain were booked to take people to London for the march.

A petition to cancel Brexit altogether gained 4.39 million signatures in just three days after May told the public "I am on your side" over Brexit and urged lawmakers to get behind her deal.

But protesters disagreed with May's claim that she is on the side of the British public, with one placard reading: "You do not speak for us Theresa."

But ever since, opponents of Brexit have been exploring ways to hold another referendum. Some opinion polls have shown a slight shift in favour of remaining in the European Union, but there has yet to be sustained evidence of a decisive change in attitudes.

May has repeatedly ruled out holding another Brexit referendum, saying it would deepen divisions and undermine support for democracy. Brexit supporters say a second referendum would trigger a major constitutional crisis.

Those favouring Britain remaining in the EU say Brexit will bring economic hardship and disrupt trade, as well as an end to many social benefits, including the right to live and work in 27 other countries.

Supporters of Brexit say the divorce might bring some short-term instability, but in the longer term Britain will thrive if cut free from what they cast as a doomed experiment in German-dominated unity that is falling far behind other major powers.

"We already put it to the people. And the people roared," pro-leave group Change Britain said in a tweet. 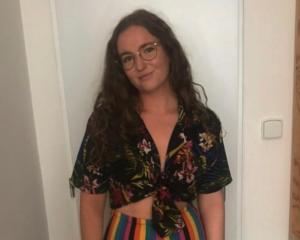 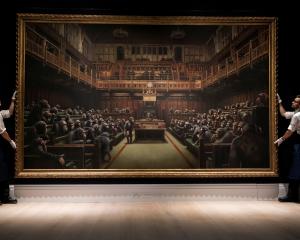