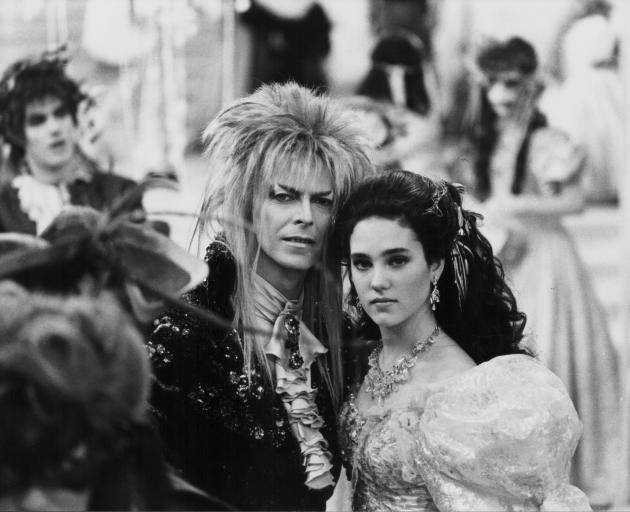 Stars align ... Actors David Bowie and Jennifer Connelly perform in a scene from the movie Labyrinth. PHOTO: GETTY IMAGES
My father is something of a Luddite, with an absolute abhorrence for television, social media, and most other modern technologies.

I therefore grew up without a TV, and missed out on countless Disney movies, The Simpsons and many other delights of childhood television. But once a year, on our annual family holiday, my father permitted us to stay at a holiday house (usually a crumbling old bach loaned to us by a family friend) with a television.

This TV set became the centre of our small universe. We children revolved around it, casting longing glimpses at its dark screen during the day, counting down the hours until dinner had been eaten, the plates scraped, and it was time for a movie.

The films we watched on these holidays have indelibly imprinted themselves on to my mind. From The Sound of Music to Mary Poppins to the LOTR trilogy, I mark my childhood years by the videos we watched on the old VHS player.

There is one film to which I return again and again - Labyrinth, a 1986 musical fantasy film directed by Jim Henson, based on conceptual designs by the artist Brian Froud, with George Lucas as executive producer. Labyrinth tells the story of a 16-year-old girl called Sarah (Jennifer Connelly) who must venture into a strange, goblin-infested maze to rescue her baby brother Toby from Jareth the Goblin King (David Bowie).

Within the labyrinth, reality is not what it seems. Sarah encounters a host of odd, disconcerting phenomena, from talking worms, to carnivorous fairies, to moss adorned with eyeballs, and the Bog of Eternal Stench.

But perhaps the most disquieting creature within the Labyrinth is Jareth the Goblin King. With his wicked smile, lip-gloss, eyeshadow, skin-tight leggings, and back-combed mullet, David Bowie is the ultimate glam-rock antihero. He croons, capers around his kingdom with his goblin minions, tosses babies into the air, juggles crystal balls and wreaks mischief. Labyrinth was my introduction to Bowie and his music, from the fun Magic Dance bop to the dark and romantic As the World Falls Down and the unnerving Within You.

I rewatched Labyrinth the other day, somewhat worried that it would not have aged well. But for me, it solicited the same emotional response - a complex and messy mix of awe, humour, and appreciation for the sheer inventiveness of Henson and his team. You see, there are actually very few ‘‘people’’ in this film. Most of the characters are puppets produced by Jim Henson’s Creature Shop. Before CGI, green screens, and VFX, there was the incredible talent and artistry of Jim Henson and his team. The Dance Magic scene alone consisted of more than 48 muppets, 52 puppeteers, and eight people in goblin costumes. Labyrinth combines sumptuous matte paintings, carefully manoeuvred puppets and many other in-camera visual effects with the restrained and tasteful use of postproduction computer-generated effects.

To me, these effects endow upon the film a strange, dream-like quality, like the feeling one gets while sleepwalking, or locked in a bout of sleep paralysis.

For the most part, Labyrinth adheres to the same formula as most classic fairy tales - the progression from childhood to adulthood. We have our young heroine Sarah, with her childish delights, distracted father and ‘‘wicked’’ stepmother. Henson and his team drew inspiration from a number of literary classics, including The Wizard of Oz, Snow White, and the stories of Hans Christian Andersen, Maurice Sendak and Lewis Carroll. But Labyrinth also encompasses the darkness of traditional fairy tales. It is not, for want of a better phrase ‘‘Disney-fied’’.

At the beginning of Labyrinth, Sarah finds solace in toys, books, and play-acting. Yet by the end, she has successfully evaded the lascivious smirks and debauchery of the masquerade ball, the Bog of Eternal Stench, the groping Shaft of Hands and the wiles of Jareth. Sarah also traverses an emotional journey. She gradually frees herself from childish impulses, becomes less selfish, spurns the attention of inappropriate suitors, and learns to take responsibility for her actions.

The film’s resolution is more feminist in nature than most fairy tales. ‘‘You have no power over me’’, she says triumphantly to Jareth, and with these words, she returns victoriously home with her little brother. Unlike other fairy tales, this young woman is not married off or betrothed to a prince.

Now that I’m older, I wonder what I would have done when faced with the decision to stay with Jareth and his troop of goblins, or return to the real world of squalling children, adult responsibilities and the ever-encroaching threat of ageing.  Given the alluring power of the Goblin kingdom and love for Bowie, I probably would have remained by Jareth’s side as his Goblin Queen, little brother be damned.

I have lost many of my childhood treasures - my teddy bears have been joyfully claimed by other boys and girls, and my books are all dog-eared and dilapidated. But I am grateful that I still have the Labyrinth to return to, any time I like. As Sarah’s companions Didymus and Hoggle remind her, ‘‘should you need us, for any reason at all ...’’, friends - and my friends from the Labyrinth - are never too far away.