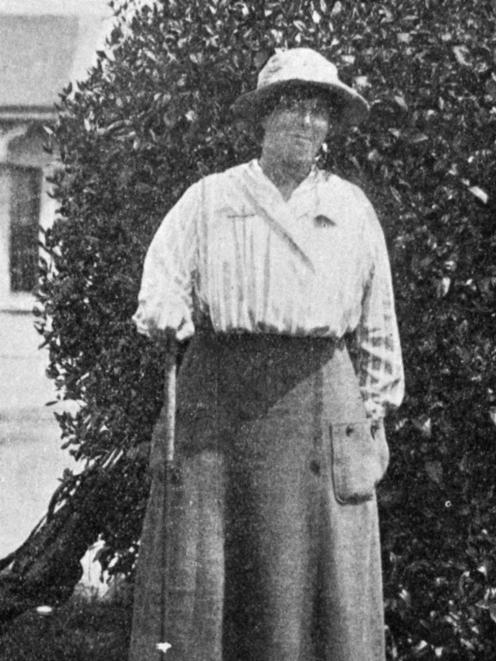 Mrs Orbell, of Oamaru, winner of the ladies’ golf championship. — Otago Witness, 30.11.1920.
ROXBURGH: The Teviot Electric Power Board has arranged with the Dunedin City Council for the services of its Waipori engineer (Mr A.P. Aldridge) to prepare the necessary plans, estimates, etc preparatory to placing a proposal before ratepayers to borrow the necessary capital for a local power scheme.

Mr Aldridge has had long and practical experience with the City Corporation, and is well qualified for this position. Once the loan proposal is sanctioned by the ratepayers no time will be lost in developing the scheme, and it is confidently hoped that in less than two years the whole district from Allans Hill to Island Block will be supplied with electricity. The Provisional Committee was fortunate in securing at a very satisfactory figure the mining plant and water rights of the Roxburgh Amalgamated Company. This carries with it a valuable asset in Lake Onslow, which now becomes the property of the board and under its control. The conservation of water during the dry season will ensure a never-failing supply in the driest parts of the year.

While the district is fast increasing its productiveness, and in this respect it is always reminded of the advice given by that veteran statesman, the late Mr Seddon, at the turning of the first sod of the extension of the railway from Lawrence, little progress is being made with the extension of railway communication. The turning of the first sod of the Lawrence-Roxburgh railway is now ancient history, but Mr Seddon’s advice to the settlers to plant their trees and increase production, and the Government would provide the railage, is still fresh in the memory of those present on that occasion. Mr Seddon spoke on behalf of the Government, and the present terminus of the railway and above all the meagre vote of £8000 placed on the recent estimates furnish abundant evidence of the apathy of the Government and how little reliance can be placed on its promises. However, the district has experienced so many rebuffs of this description that they only serve as incentives to greater energy and agitation, and the small vote of £8000 is not going to be accepted without a protest. Efforts are being made by the local Railway League to have this vote supplemented, and it is hoped that before long some real indication of the government’s intention to push on the line will be forthcoming.

The Hawkes Bay Tribune states that the small boys of Hokowhitu (Manawatu) have had a harvest during the past few days. During the recent floods, the lagoon was higher than it has been for 20 years, and the yards in the vicinity were inundated. As the water began to recede hundreds of eels were noticed making their way back to the lagoon down the drains. Small boys fell upon them with spears, and some good catches are reported. There were no mud heels amongst them. They were all “silver bellies”.

Sneak thieves have been busy in Napier of late, and during last weekend committed a very mean theft (states the Hawke’s Bay Herald). During the late hours of Saturday or early on Sunday morning a housewife, who had laid in a stock of provisions to tide the family over the weekend, was disturbed by the noise of something falling. The noise, however, was attributed to the high wind. In the morning it was found that the house had been entered during the night and the thieves had decamped with the family’s stock of cakes, scones, biscuits, and even butter and jam, in fact, almost everything that was eatable.

Operations are now in full swing in connection with the erection of the new post office (says the Alexandra Herald). There has been a considerable amount of excavating of soil and rock to clear the site, but that work is now about completed. Meantime progress is being made with the foundations and the carpenters have also made a start. — ODT, 20.11.1920.