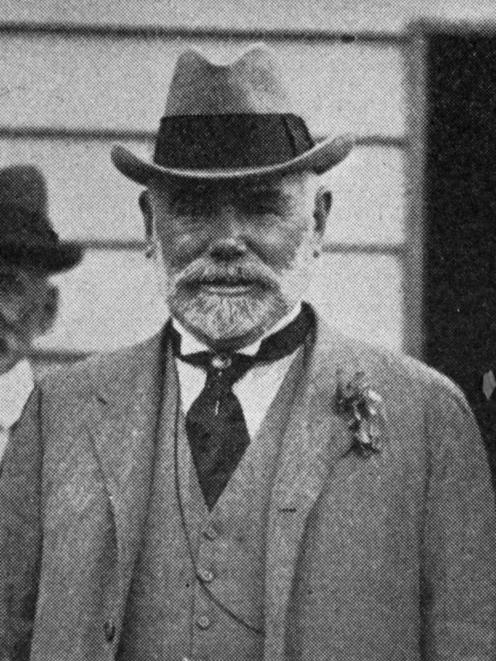 Sir Thomas Mackenzie during his tour of the South in December 1920. — Otago Witness, 14.12.1920. COPIES OF PICTURE AVAILABLE FROM ODT FRONT OFFICE, LOWER STUART ST, OR WWW.OTAGOIMAGES.CO.NZ
Anything in the nature of a progress report bearing upon the campaign against tuberculosis is of interest to every community. Scanning the account of the proceedings at the recent conference at Liverpool of the National Association for the Prevention of Tuberculosis we at least gather some idea of how this great humanitarian crusade is faring, even if no definite assurance is discoverable that victory is in sight. The discussion seems to disclose that the medical experts who know most about the campaign against the White Plague are least satisfied with the position of affairs. Sanatorium treatment has not given all the results that were widely expected of it, tuberculosis is still rampant, and in many parts of Europe its ravages have been enormously extended by the privations due to the war. On the other hand expert knowledge of the disease has advanced in several directions. More and more the view is gaining ground, we are told, that the mere presence of tubercular bacillus is not enough to determine infection, that the bacillus can actually exist in the human body without attacking it or giving rise to any mischief, but in the presence of some as yet unknown circumstance the visitor may become converted into a deadly foe.

Dust a problem at trots

The Forbury Park Trotting Club concluded its meeting in fine weather on Saturday, when there was a record attendance in the history of the club. The card for the day provided some interesting sport and the general result of the meeting stands as a good augury for the club’s efforts to cater for the sport during the balance of the season. The track was in good order, but the dust marred the principal event as a racing spectacle, and doubly handicapped the back markers. In fact it is imperative that the Forbury Park Trotting Club, as well as the New Zealand Metropolitan Trotting Club, will have to make more serious effort to counteract the dust evil, which spoils the appearance of a race, doubly handicaps the back markers, and imparts an unnecessary and real danger to the high-class events, which are usually contested by close running fields. It has been fully and amply demonstrated that a sprinkling of seawater will lay the dust for a considerable period, and failing that inexpensive method, some experiment should be made to see if a small quantity of cheap oil would not have a much to be desired effect.

Catlins the next Taranaki?

The Owaka A and P Association was not favoured by the weather for its 13th annual show, held at Owaka on Friday. With the exception of a couple of sharp showers it kept dry, but there was a bitterly cold wind sweeping across the ground that made the conditions unpleasant. A total of some 450 entries was well ahead of last year’s, the increases being in dairy produce, light horses, Jersey cattle and sheep. There was a slight decrease in draught horses and shorthorns. The attendance of the public was considerably larger than it was last year. A welcome visitor to the show was Sir Thomas Mackenzie, who was entertained at lunch by the Association. He said that nothing could have given him greater pleasure than to revisit the Catlins, a district with which he had always been associated, and among whose settlers were some of the best friends he had in the world. He congratulated the district on the wonderful progress it had made, but still as yet only the surface of the district had been scratched. The time would come when they would have a population there as dense as it was in many parts of Taranaki.

Ten years’ attendance at Bluff school without being absent for half a day, or even late on any occasion, will be the record of Lilla Vickery of Bluff, unless something very serious should happen to her during the next fortnight (says the Southland Times). In order to guard against an attack of measles during the recent epidemic, she submitted to vaccination, but in her case the cure was harder to bear than the disease, and it was only by grim determination that she was able to keep her attendance record unbroken. Her exceptional performance is to be specially recognised at the annual presentation of prizes.