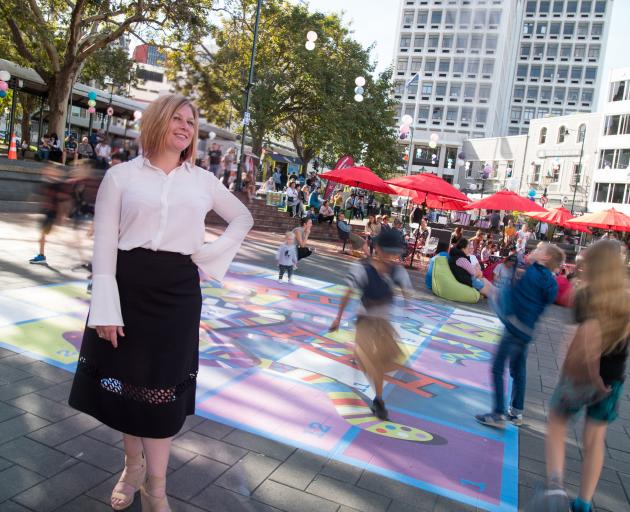 Crystal Filep enjoys the atmosphere of ``The Octagon Experience'' during Easter. PHOTO: DCC
Dunedin has embraced a guide aimed at developing a world-class street design for the city, writes Crystal Filep.

Have you ever wondered why you love spending time on a particular street? Or why you tend to avoid other streets, even if they form part of the most direct route on your journey?

Picture yourself walking, cycling or driving along George St, Moray Pl, or Vogel St. What is similar or different about the ways you use each of these streets?

How people use a particular street is influenced at least to some extent by that street's design. That is why humans have been thinking and re-thinking the design of streets for centuries.

Equally important to use is how people feel about streets. George St, Moray Pl, or Vogel St are just a few of many streets that speak to Dunedin's character and hold vast memories for a variety of individuals.

Yet like all cities, Dunedin is rapidly changing and shifting. As infrastructure and technology are upgraded and society evolves in an increasingly global and interconnected reality, how will the design of Dunedin's streets respond?

To help answer, it is worth taking stock of recent street design transitions in our city. Take, for example, Jetty St. Here was a dark, unsafe vehicular thoroughfare beneath an overbridge that has been transformed into a vibrant, people-focused pedestrian area. Only days after construction was complete, new users frequented the re-designed street: performances and dancing, socialising, recycling, parking bicycles, and al fresco dining. Yet the design responded not only to shifting uses, but also to the site's history and connection to local culture through certain materials and design elements. For example, it incorporated recycled bluestone from historic cattle yards and a feature wall made from re-purposed historic ship parts with ``living'' green sections.

To further expand our thinking about what is possible, Dunedin has also to look beyond its own boundaries. What are the world's best streets? What physical, designable characteristics make a street great? And can we broaden our measure of street design success to include access, safety and mobility for all users, environmental quality, economic benefit, public health and overall quality of life? This broadening of perspective is central to a new publication of importance to cities like ours: the Global Street Design Guide.

The guide is a leading resource that cities and communities can choose to utilise as a baseline for designing streets and public spaces. Rather than being prescriptive, the guide is exploratory and intended as a user-friendly tool. It equips the council, other professionals and community groups with design principles proven successful in other contexts, yet remains flexible in response to local variations and community efforts.

It was produced as part of the United States' National Association of City Transportation Officials (Nacto's) global designing cities initiative, of which Dunedinite Skye Duncan is the director.

The DCC recently hosted Ms Duncan, who delivered a public talk on the principles and tangible examples of the Global Street Design Guide in practice. The event was well-attended, with positive feedback about the possibility of Dunedin embracing the guide as an effective and inspirational resource.

The guide is broadly aligned with Dunedin's strategic framework, and encompasses techniques that the DCC has already come to endorse as good principles of urban design - as seen in the transformation of Jetty St, for example.

Therefore, and on behalf of the Dunedin City Council, Mayor Dave Cull has officially endorsed the guide as representing a vision for world-class city street design that meets the evolving goals of our communities.

As a baseline for designing streets and public spaces in our city, the guide's principles can help to inform ongoing and new projects. As design development and implementation of Dunedin's central city plan begins, for example, the guide can help us define, shape and design - as well as measure and evaluate - our central network of streets and spaces to ensure an integrated approach that prioritises people and place in response to challenges that other cities around the globe are also facing.

It is about asking what physical, designable characteristics encourage you and others, including those with disabilities and those choosing other modes of transport to use or respond to different streets in different ways.

It is about considering the effects of street design on our breathable air quality, on our daily exercise habits, on transport by-products making their way into our oceans, and on our children's connection to the past.

By endorsing the Global Street Design Guide, Dunedin joins a network of leading cities around the globe which continue to embrace the often complicated challenge of designing streets. Through responsive street design informed by global best practice, Dunedin can build on its successes and secure a future that is safer, more sustainable, and healthier for us all.

Most importantly, the guide can help us transform more of our streets into those that you love spending time on.