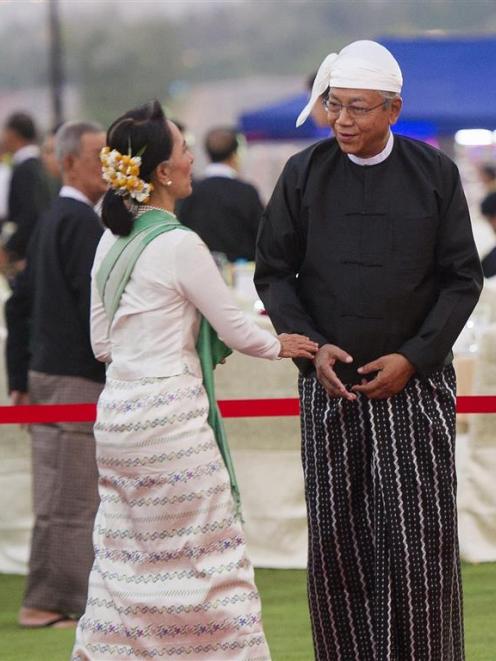 Burma’s new President Htin Kyaw welcomes National League for Democracy party leader Aung San Suu Kyi at a dinner reception after a swearing-in ceremony in Naypyitaw, Burma, last week. Photo by Reuters.
Finally, after Aung San Suu Kyi founded the National League for Democracy in 1988, after she won the 1990 election by a landslide, after the military ignored the results and put her under house arrest for 15 of the next 21 years, after a difficult five-year transition since 2011 where the return of democracy to Burma was often in doubt, after 54 years of military rule, the woman Burmese just call "The Lady' is in power.

Ms Suu Kyi's NLD won 80% of the contested seats in Parliament in last year's election, the first really free election since 1990, but she was not the person sworn in as president on Wednesday.

That honour went to her childhood friend Htin Kyaw, a senior figure in the NLD who has been at her side since her release from house arrest in 2010.

The Lady so frightened the generals who ran Burma they wrote a special clause into the constitution that banned her from becoming president.

It actually says nobody whose immediate family included foreigners can hold the presidency, but Ms Suu Kyi is the only prominent figure in Burmese politics who fits that description (her sons hold British passports).

Even as they retreated from absolute power, the military refused to budge on that law, and they still have a veto on constitutional changes, so it is Mr Kyaw who actually takes power.

But Ms Suu Kyi has made it clear

she will be "above the president'', and Mr Kyaw agrees.

"This is sister Aung San Suu Kyi's victory,'' he said after the Parliament that was elected last year voted him in as president two weeks ago.

Ms Suu Kyi herself made the position clear when she announced the members of the new cabinet in mid-March.

She will take four of the 18 cabinet posts, including the foreign ministry and, crucially, the newly created job of minister in the president's office.

And nobody in the NLD has any problem with the fact that she will effectively be using the 69-year-old president as a glove puppet.

"It doesn't matter how many ministries she takes as she will run the whole government anyway,'' said Win Htein, a senior NLD politician who is close to The Lady.

Even the army has accepted this bizarre arrangement.

In December, after Ms Suu Kyi met Than Shwe, the ex-general who ruled Burma with an iron hand for 19 years before retiring in 2011, the general's grandson wrote on Facebook: "After winning the election, it's the reality that all have to accept: that Suu Kyi will be the country's future leader.''

It's not exactly a public declaration that the military are letting go of the reins of power, but that's how things are done in Burma.

The question remains, however: Are the generals really letting go?

They have got very rich over the past half-century of military rule, and the Burmese army's corporate domination of the economy leaves even the Egyptian army in the shade.

They are certainly not going to let any new democratic government investigate how they got so rich, or do anything to cut off the cash flow that sustains them.

They are also going to watch very closely how Ms Suu Kyi's government handles the tricky question of negotiating ceasefires in the many military confrontations with Burma's numerous minority peoples.

Now it is Ms Suu Kyi's turn to try, but the army won't let her make a deal that will "damage national unity''.

Just what that means is unclear, but the original military takeover in 1962 was triggered by an elected civilian president's attempt to give Burma what it desperately needs: a federal system of government.

The army still won't allow that.

The constitution the generals wrote gives the army a quarter of the seats in Parliament, which is enough to block any constitutional change.

They also created a National Defence and Security Council that can declare an emergency and suspend the elected government - and six of the 11 members of the council are military officers.

If the army really wants to take back power, therefore, it still can do so quite legally, but it would face massive popular resistance.

Moreover, it was patriotic generals who finally allowed the democratic transition to begin, because they recognised that half a century of military rule had turned Burma from the richest country in Southeast Asia into the poorest.

If they go back into politics, they condemn their country to even more isolation and poverty.

Burma's transition still has a long way to go, and nothing is safe yet. Even in next-door Thailand, which is far richer and became a democracy a quarter-century ago, the generals are back in power.

But for the moment the Burmese media are free, the elections are honest and the investment is flowing in.

With care and some good luck, this transformation could really succeed.