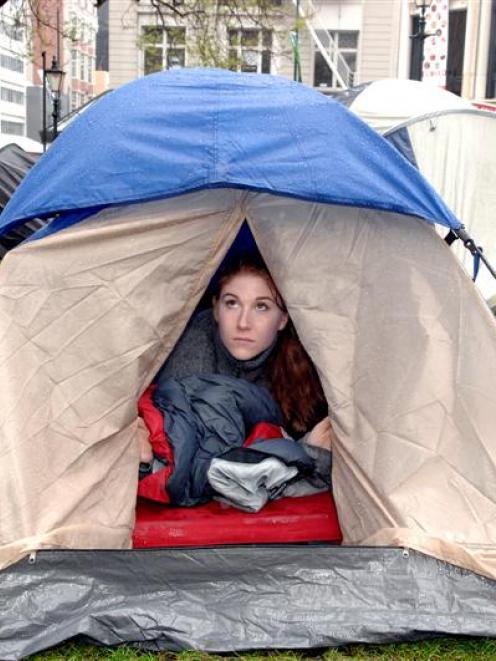 Niamh O'Flynn, part of the "Occupy Dunedin" protest, looks out at the rain from her tent yesterday afternoon. Photo by Linda Robertson.
Brrrrr! Not great weather for camping. It'll soon be a bog up there in the Octagon - where the good folk of the "Occupy Dunedin" movement have parked their tents. Can't imagine they'll want to stay long in this sort of weather but one or two of them seem determined to remain.

There's been a bit of a squabble over statutes governing occupation of the site. It's been said a 19th-century bylaw allowing immigrants en route to the Central Otago goldfields to squat temporarily in the city centre is still in force.

A neat irony that: it's a gold rush of a different kind this mob have set up shop to condemn. Their focus is corporate greed, social inequality, free-market economics and environmental issues, much of which they would undoubtedly argue arises from the unfettered accumulation of the aforementioned "gold".

And, interestingly, it's an echo that has been witnessed in large-scale demonstrations across the world.

"Occupy Dunedin", like other protests around New Zealand - and elsewhere in the world - takes its inspiration from the "Occupy Wall Street" that started a month ago, in which activists pitched tents in front of the New York Stock Exchange. At the weekend, the "movement" went global with occupations in more than 900 cities.

It's particularly interesting that such a disparate but widespread grassroots grouping - there were other demonstrations in Auckland, Wellington, New Plymouth, Christchurch and Invercargill at the weekend - has emerged at a time when involvement in more formal politics seems at a low ebb; and the status quo is safely ensconced above the poll high-tide mark and will remain so - unless there is a sudden upheaval in public opinion. Only an All Black nightmare this Sunday night, to add to the oil slick disfiguring Bay of Plenty beaches, is likely to achieve that.

Still, it does show there is intelligent life out there prepared to get wet and cold to air its views, vehement among those being the unhealthy state of inequality in modern Western societies. According to a report in The New Zealand Herald, the Luxembourg Wealth Study shows the United States "is by far the most unequal developed country with the top 1% of Americans owning 33% of the nation's wealth".

That study did not include New Zealand and Australia, but "a 2006 Statistics NZ survey found the top 1% of New Zealanders owned 16% of our wealth" which was higher than every country in the Luxembourg study except the US and Sweden. The "Occupy" movement in its various guises has adopted the "We are the 99%" slogan in response to such wealth discrepancies.

But to come back to those idiosyncratic bylaws, nobody seems entirely clear about them. Mayor Dave Cull and new Dunedin City Council chief executive Paul Orders have sensibly taken a softly-softly approach to the occupation: a confrontation would after all generate welcome publicity to the cause; but also because, it seems, the movement has struck something of a chord among the general populace.

Speaking of the DCC, it's time it collected the odd bouquet, rather than the brickbats scrutiny of its operations sometimes occasion. A friend, most of whose experience of such matters derives from other cities, speaks highly of service that greeted him when he was recently navigating some necessary building processes. In what other centre, he remarked, can you walk into an open-plan office and, without an appointment or a queue, sit down in front of the person you need to see; and, he added, have that person explain promptly and efficiently what is required to be done and how to go about it. Doesn't sound quite like the unwieldy bureaucracy some would have us believe the DCC has become.

Much council criticism also arises out of the school of thought that local bodies should restrict themselves entirely to roads and plumbing - in one guise or another. But I have always thought councils have a mission in some small way to spruik the social and cultural wellbeing of a city.

For a few years, the playwright's agency Playmarket, the Fortune Theatre, Stage South and the DCC have supported a couple of modest programmes, Write Out Loud and Read Out Loud, promoting the workshopping and reading of work by local and New Zealand playwrights.

One of these was Paul Baker's fine piece Meet the Churchills, which had its debut at Circa Theatre in Wellington this year; another was my own, The Truth Game, now on at the Fortune. I can't speak for Paul, who hails from Oamaru, but I know that, for me, the contribution was invaluable in the play's long journey to the stage.