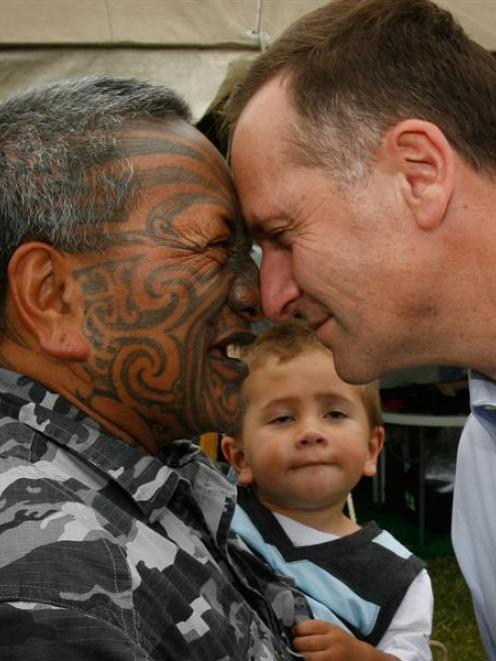 Tame Iti with his grandson Te Rangimoaho (20mths) meet National Party Leader John Key on the grounds at Te Tii Marae during the celebrations ahead of Waitangi in 2008. Photo by the New Zealand Herald.
Dean Cowie reviews progress on historic Treaty of Waitangi claims; what has been achieved, what has changed and what might still happen.

Despite its controversial place in New Zealand society, the ambitious programme of negotiating historical claims comprehensively, finally and quickly has seen significant success. As at the end of 2012, 48 deeds had been signed, 14 in 2012 alone.

These have finally settled historical claims to commercial fisheries, almost all the South Island and perhaps a fifth of the North Island claims. Negotiations are under way with almost everyone else. Up to 26 agreements in principle are being converted into deeds. The Waitangi Tribunal's programme of district inquiries is almost completed. The Crown's policy has gained cross-party support.

It appears that everyone, including most Maori and politicians, want the job completed, fast. Despite the progress made, significant challenges remain in order for the Crown to meet its objective of completing settlements within a short timeframe. Undertaking such an ambitious programme costs money. Between 1997 and 2012, the Office of Treaty Settlement received $182,382,000 for its Vote Treaty policy and negotiations output. Over that time, 46 deeds were reached, at an average transaction cost of $3,964,826 per deed. However, this average is trending downwards and should continue to do so over the next few years.

In 1992, the Cabinet decided its negotiation parameters and policies, published in 1994 as the Crown Proposals. It was widely criticised for failing to develop its policies in consultation with Maori and that too little was actually negotiable. So, how have these policies fared over time? The Crown's strong preference to negotiate with large natural groupings appears to be intact but increasingly flexible.

This is demonstrated in its willingness to negotiate with a regional collective and then settle with many groups within a region. For example, whereas the 1992 Fisheries settlement assets are allocated to one iwi (Ngati Whatua) in the greater Auckland region, over the same area, up to seven groups have been accepted as large natural groups. The Crown's preference for direct negotiations with Maori without recourse to the courts or the Waitangi Tribunal's remedial powers has been realised. The Crown has also largely avoided its use in settlements of former state-owned enterprise properties. The Crown's policy of not transferring permanently any national parks remains intact. However, it is coming under increasing pressure.

At the last hour, in May 2010, the Cabinet declined to settle with Ngai Tuhoe over this issue. However, in 2012, the parties agreed to the novel compromise of Parliament establishing a new entity in which Te Urewera National Park would be vested under a form of joint management. The major maunga (mountains) of the central North Island are still to be negotiated: Ruapehu, Tongariro and Ngauruhoe. Maunga Taranaki has been carved out for later treatment, once all Taranaki tribes are ready.

The no-transfer policy on national parks is at odds with the treatment of significant sites such as the Auckland maunga, Mauao (Mt Maunganui) and the Te Arawa Lakes. The Crown's resistance appears to reflect a lack of will on its part, rather than there being any significant policy barriers that prevent transfers of national parks in a way that also protects the public's interests. The fiscal envelope of $1 billion was abandoned in 1996, but remained to a lesser extent until 2007 under the principle of benchmarking or treating like claims alike.

The $1 billion is being exceeded in real terms and is triggering the relativity clauses of Waikato-Tainui and Ngai Tahu settlements. How far in excess of the $1 billion (1994 dollars) the total figure will be remains to be seen. And some large settlements remain. Ngai Tuhoe was offered $120 million in 2009 (increased to $170 million in 2012), of which $54 million is drawn from the Central North Island (CNI) deal.

Ngati Tuwharetoa also has a similar proportion of the CNI settlement and will require more to bring final settlement to all its claims. Ngati Maniapoto has a large land area, as do the tribes of Hawkes Bay, Wairarapa and the lower North Island. Whakatohea was offered $40 million in 1996; its neighbours Ngai Tai and Te Whanau a Apanui are yet to enter negotiations. The tribe with the largest population by far, Ngapuhi, is preparing its case. As the settlement process enters its third decade, the Crown's task of reaching the last settlements while maintaining broad fairness between tribes' offers based on land loss, severity of breach and current population levels is becoming more difficult.

For example, all eight Taranaki iwi have a Waitangi Tribunal finding that they may have suffered the most severe breaches, and consequently receive a raupatu (confiscated land) premium in their financial offers under the Crown's policies. However, for the four Taranaki iwi that settled between 2001 and 2006, that premium's real value has been eroded since 2007 by large settlements that include Crown forest licensed land with their associated payouts of accumulated rental money, and tradeable carbon credits, which are not available to seven of the eight Taranaki tribes as they have no such land.

The increase in quantum in just 13 years demonstrates how much leverage Maori negotiators have with the current Government under its desire to end all settlements as quickly as possible. Overall, as at the end of 2012 there appear to be at least 44 more deeds to negotiate before every tribe's claims are settled. The Government has reserved itself $1.2 billion over the next four financial years to pay for these settlements, which is on top of the approximately $1.2 billion it has spent since 1992.

The escalation of significant financial payments in the midst of economic austerity may challenge non-Maori support for the ongoing settlement programme. The Government's promise that it is purchasing ''finality'' will also come under strain once it begins paying Waikato-Tainui and Ngai Tahu their 17c in every dollar ''relativity clause'' bonuses. But the settlement process is not just about spending money and reaching settlements.

Loftier nation-building outcomes are being realised. The process restores the honour, or moral legitimacy, of the Crown to govern on behalf of all New Zealanders. It also affords to Maori the opportunity to take real ownership of a future that is different from their past.

These intangible benefits of reaching settlements - international respect, a truly post-colonial government, tribes with economic power and sound governance that instil pride and confidence in their people - could yet prove to be the most significant legacies of the Treaty settlements process.

• Dean Cowie worked at the Waitangi Tribunal's research unit and as an Office of Treaty Settlements negotiations manager. Since 2007, he has been chief negotiator and manager at the Native Title Unit for Victoria, Australia.

[This is an updated and condensed version of an essay Dean Cowie wrote for Treaty of Waitangi Settlements, published last year by Bridget Williams Books, Wellington, and edited by University of Otago staff members Nicola R. Wheen and Janine Hayward.]