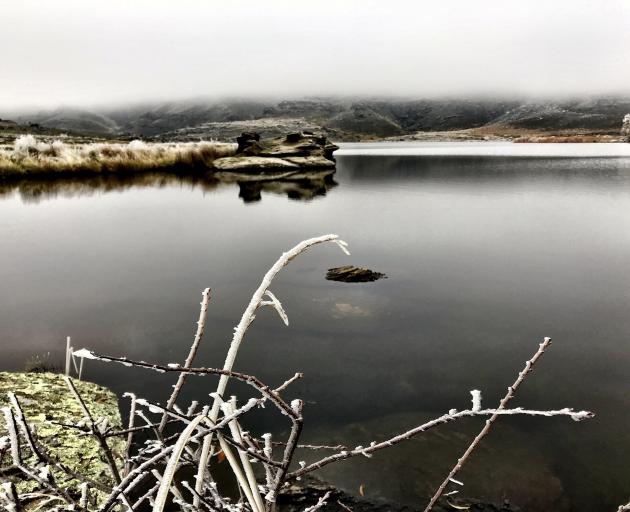 The hoar frost may have gone, but this photo is too good not to use. Here's Butchers Dam looking decidedly chilly at the weekend. PHOTO: JOY BENNETT
I have had a few interesting responses to my moanings about dog crap on the streets of Dunedin.

It seems that, if I am not careful, this issue is going to spark a serious suburb-versus- suburb stoush. It was probably my fault for mentioning Highgate in the first place.

Louise Perry, who signs herself "South Dunedin girl forever" but now lives in Maori Hill, is repulsed by what careless dog owners leave behind.

"We moved to Dunedin a year ago after many years away. I was a regular walker along Highgate at first, both for the exercise and to see the beautiful view over Dunedin from the Stuart St overbridge.

"It wasn't long before I was seeking routes elsewhere, as I would be feeling physically ill some days as I was carefully watching out for the offensive dog poo. I'm not a dog lover so am even more disgusted.

"Have standards dropped, or were they never there in Maori Hill?" she asks.

But Louise is not alone.

Maureen, of St Clair, whose West Highland terrier Morgie is 10, rang and told me: "I think Highgate people, who are supposedly more posh than us, aren't as good, actually.

"We walk Morgie on Kettle Park every day and most owners pick it all up. They carry bags for it. I think people here are more responsible."

Another caller, who did not want to be named, suggested some Highgate/Roslyn/Maori Hill residents with dogs probably thought someone from the council would be along cleaning up after their pooches, given they pay higher rates.

I feel a "Clean Up Highgate" campaign coming on.

Back to the telly

And, with some relief, it is time to turn to a different subject.

I am still getting great responses about early television memories. Thank you so much for sending them in or phoning.

Kay Macalister, of Bannockburn, remembers a red-letter day in the mid-1970s. 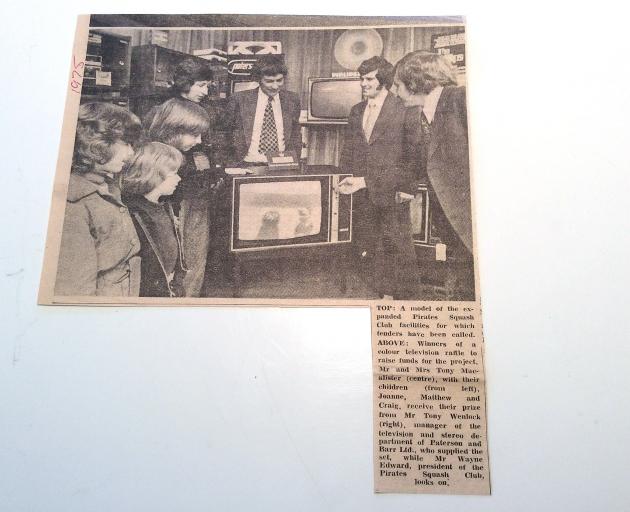 Excuse the pretty moire pattern. In 1975, the Macalisters were presented with this colour television set at Patterson and Barr's in High St, Dunedin. In case you are wondering, Sesame Street was on at the time. PHOTO: ODT FILES
"In 1975, the thought of owning a colour TV was the last thing on our minds until Ian McMeeking, the owner of Mornington Motors, phoned to say we were the lucky winners of a colour set, being the first prize in a raffle to raise funds for the Pirates Squash Club building project.

"It was a double bonus, as the old black-and-white was then relegated to the crib in Arrowtown."

They were presented with the colour telly at Patterson and Barr's in High St.

Ivan Pryde, of Dunedin, remembers another innovation in the early days of television, one involving a "magnifying screen".

"Because the TV screens in those days were small, the gadget was placed between the screen and the viewer to make the picture appear larger. It worked.

"The problem was that the picture was upside-down, just as when you look at your own reflection in a spoon.

"The manufacturer's response to complaints was to tell the owners to turn the TV set upside-down."

Broadcaster Jim Sullivan, our Nothing too Serious columnist, of Patearoa, says he covers the early life of DNTV2 in his book, Something in the Air.

"The first ad was a voice-over for Smiley Brothers Shoes. There were six minutes of ads the first night - local firms included Greggs, Ross and Glendinning, Thompson's soft drinks and Calder Mackay, offering television sets for a deposit of 7 10 shillings, and then 30 bob a week.

"The first programme was a cartoon, Crusader Rabbit, and the weather caption (handcrafted by graphic artists on the DNTV2 staff) misspelled the word `southerly'.

"Russell Garbutt's book, It's OK Leaving Here, has all you need to know about DNTV2," Jim says.

Coincidentally, Russell, of Clyde, has also written in with more details.

"I worked at DNTV2 in the 1960s and then again in the '80s onwards after a time with ATV Ltd in the UK and 13 years at CHTV3 in Christchurch.

"I was asked by then DNTV2 manager, Lorraine Isaacs, to write a few words for the 25th anniversary of DNTV2 and the intended page or so turned out to be a small published book called It's OK Leaving Here, which was distributed to attendees of the anniversary.

"In the book, I note that the first commercial to play on July 31, 1962, was a slide and voice-over for Smiley's Shoes. The first programme to play at 6.30pm was Crusader Rabbit.

"The weather and news started at 6.54pm and lasted until 7.02pm. The full night's programme is published in my book and I note that transmission closed at 10.35pm.

"The DNTV2 transmitter was only 500 watts but, despite this, it was reported that Gore and Oamaru had fair reception and that Clinton, with less than a population of 500, had five TV receivers installed.

"The early days at DNTV2 were amazing. With a staff that was really young and had huge imagination, the station produced an amazing array of programmes. I was privileged to be a small part of it."

And on that note, it's time for closedown for another week.

We had many phone calls yesterday about our front-page photograph showing snowy Halfway Bush in Dunedin and a four-wheel-drive vehicle whose driver has not properly cleared the windscreen, as the law requires.

Hopefully, most other drivers had more sense and also more concern about not obscuring who or what might be on the left-hand side of the road.

Maori Hill, due to geography, looks down on us, but we are honest, industrious and hard working. Because all the water flows downhill, if we chose to, we could look Down on them.