‘A host of golden daffodils’ lost 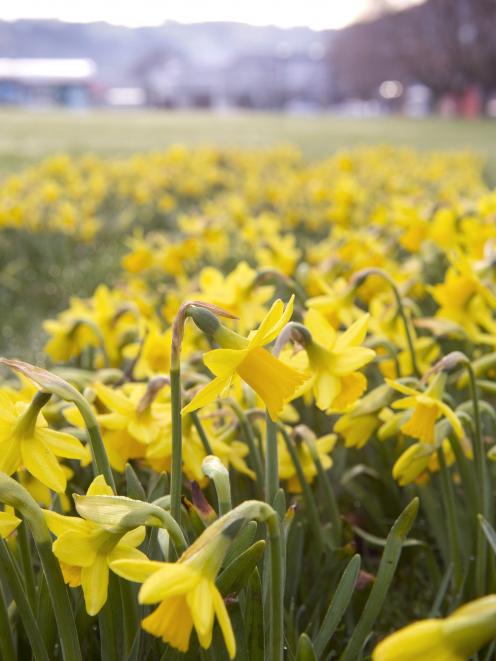 Daffodils dancing in Dunedin. PHOTO: GERARD O'BRIEN
As the days lengthen and the temperatures start to rise, we all increasingly feel the magnetic pull of spring and sense that better times are on the way.

That feeling of optimism is never far away as we head towards the end of August. A vision of spring is particularly enticing when the country is struggling with an outbreak of the Covid-19 Delta variant that has made for an especially grim last 10 days.

Bowing and waving in the breeze, tucked under hedges and trees, filling flower beds, are the surest signs of the approaching spring — daffodils.

Who could fail to be cheered by their vivid flash of yellow, their changing shape and the petals at various stages of unfurling, the sight of the closely packed stems and trumpets appearing to be chatting to their neighbour?

Daffodils are the symbol of the Cancer Society—Te Kahui Matepukupuku o Aotearoa and have been the focal point of its annual appeal since 1990.

As well as being a potent representation of new life and rebirth, scientists have discovered a daffodil alkaloid extract which has cancer-cell killing properties.

The spring’s first flush of daffodils always reaches its peak around the last week of August, the time when the society holds its street appeal. Unfortunately for all, yesterday’s collection was cancelled due to Covid-19, for the second consecutive year.

While the society has set up alternative methods for collecting funds, such as running online activities and scanning a QR-code daffodil, many hundreds of thousands of daffodils grown especially for Daffodil Day will now see out their days hidden in paddocks around the country.

What might English Romantic poet and daffodil-chronicler par excellence William Wordsworth have said about that?

Unfortunately, it seems there is no alternative way to sell these blooms now and bring some joy around the country. Apparently, at Alert Level 4 lockdown, flowers are not considered essential products to be sold in supermarkets.

There have been some strange determinations by officials of what things are seen as essential and what others are therefore more frivolous.

It seems like a ludicrous call to ban the sale of flowers, which are pretty, provide a reminder of the outdoors and an important link to nature, and give a major lift to the spirits on dark days.

But clearly they are not as important as alcohol.

Springston daffodil grower John Chamberlain made that point when he said liquor stores could still sell alcohol so why not supermarkets flowers? The cancellation of Daffodil Day and flowers being considered non-essential meant losing more than 20 hectares of daffodils and close to half his annual flower income.

It’s a similar story for the owner of Mosgiel’s Janefield Paeonies and Hydroponics, Rodger Whitson, who says he has had to start throwing away ‘‘perfectly good produce’’ because of the lack of markets under lockdown.

There will always be inconsistencies about what constitutes an essential service or product. But we would hope the list is constantly being revised. And it would also be encouraging to know officials are using some good old-fashioned common sense when they draw up their lists.

What the poet would have said.

I write in worship of Nature, which is God. Pan theism. I know nothing of my work graffitied on a fence at Kew. Materialist.