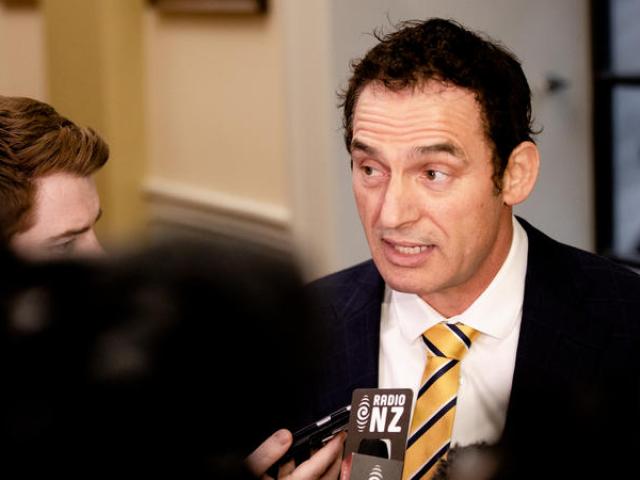 Stuart Nash. Photo: RNZ
When freshly minted Minister of Tourism Stuart Nash made his pronouncements this week on the future of the sector, it seemed like a notion from the more privileged Right than from a Labour Party MP.

Speaking at the Tourism Summit Aotearoa, Mr Nash laid down the gauntlet to the supporters of freedom camping and said he would ban the rental of vans which are not self-contained.

He also expounded on the need to collar a better class of tourist, to aim at the "super-wealthy" once the borders are reopened.

No less a hotelier than Basil Fawlty would have been cheering on the "no riff-raff here" vision from the new minister.

It is clear Mr Nash wants cash, not trash. In his opinion, he wants the type of tourist who "flies business class or premium economy, hires a helicopter, does a tour round Franz Josef and then eats at a high-end restaurant", according to RNZ.

In other words, people with money to burn.

Carefully putting the rose-tinted spectacles to one side, how many visitors will realistically be in this group? How long would they stay? Is it really the "Kiwi" way to pander for the rich and famous at the expense of real people, the backpackers and families who want to come here?

And will this ultra-privileged group collectively leave a much larger carbon footprint on the planet and on these shores than traditional visitors by their buzzing about in helicopters, zooming about in luxury cars, travelling at the sharp end of the plane and eating the most expensive cuts of meat in top restaurants?

The Covid-19 pandemic has had an appalling impact on the New Zealand tourism industry, particularly on its workforce and centres like Queenstown and Wanaka which rely on millions of visitor dollars each year.

No wonder, then, that a saturnine view of the future prevails. But there is one slightly beneficial outcome, which is that the hiatus allows industry members, the Government and locals to pause and think what we can do better when New Zealand rejoins the rest of the world.

While Mr Nash's dream does sound rather hifalutin, there will be many Kiwis happy to see the end of freedom campers who feel obliged to defecate in public places. Doing away with vans which do not have toilet facilities would be a good start.

Using language which the creme de la creme Mr Nash wants to target might not approve of, the minister came up with the best quote of the week, when he told Morning Report freedom campers "pull over to the side of the road and they shit in our waterways".

Instead, he wants New Zealand to host tourists who know how to defecate correctly.

A self-contained van would allow freedom campers to dispose of their excrement "in a way that meets our sustainability goals and quite frankly our brand".

The value of high-end tourists, and how to proposition them, has been seen as a way forward for New Zealand tourism for at least the past 15 years. But at a time of low airfares, pre-Covid that is, there has never been a lack of tourists from the other end of the spectrum visiting this country, bringing in more than $500 million a year in recent times.

Unfortunately, New Zealanders have been forced to bear some of the costs of tourism on the environment and on infrastructure, effectively subsidising international tourists.

But is it naive to think that if we can get the big spenders here disbursing their largesse from one end of the country to the other, we can use that money to provide more basic toilet and rubbish and recycling facilities so the freedom campers also come here in droves?

Rather than focus on just the fat cats, we need to attract younger visitors who may be travelling on a shoestring budget, who are more likely to get the word out there through social media and their friends about what a great place New Zealand is to visit.

After all, in years to come they may be back here as fat cats themselves.

Unless we address climate change and take strong positive action now there will be no tourist industry in the future. It is essential that going forward people pay for the damage they are causing to the environment. Airline and fossil fuel companies all over the world are currently being subsidised by tax payers, this has to stop. It is only when consumers start paying the true cost of goods and sevices, including the environmental cost, will we see a shift towards a more sustainable future. So yes tourists should pay for the infrastructure need (including environmental costs) regardless of who they are or where they sleep but most importantly they should be paying for the greenhouse gases and pollution they cause getting here, weather that be by a sailing yacht or 1st class in a private jet.

"Unfortunately, New Zealanders have been forced to bear some of the costs of tourism on the environment and on infrastructure, effectively subsidising international tourists."
What does the 15% GST they pay every time they spend a $, get spent on.
That is the problem. Central government use taxpayer money to buy our vote every 3 years and tourists don't vote so they leave the costs involved with hosting them to local ratepayers. That really sucks when the high volume tourist traffic is in low population areas.
GST from tourism should be set aside for tourism infrastructure and needs like additional health board funding.
"Instead, he wants New Zealand to host tourists who know how to defecate correctly."
This is Nash's equivalent to Clinton calling Trump voters deplorables.
He is elitist and a snob !!!
He values wealth over humanity.
Yet he is typical of the direction the Left is taking. They buy our votes with our money, they say they are for the disadvantaged but each year their numbers grow, they are grandiose with their gestures on a global scale but make local life harder for everyone, they love banning things, having power and controlling our options.

"He values wealth over humanity". Ha! That's rich coming from a dyed in the wool Tory like yourself. If you had any integrity you'd be applauding him.

Wealth is not commensurate with Class. 'Hooray Henrys' are the last types we need.

Need a better class of politician