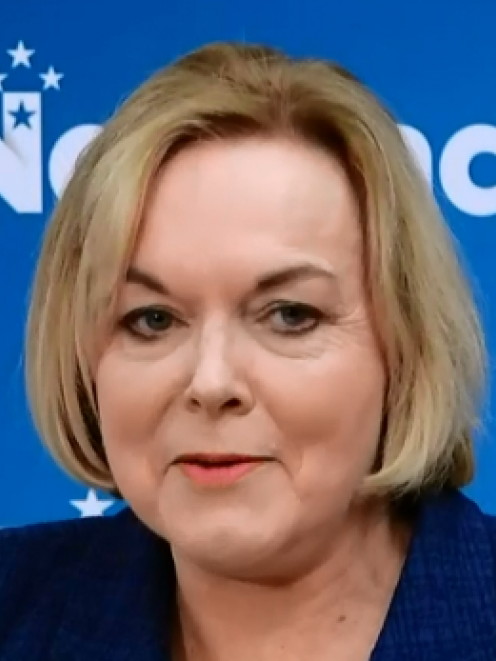 National's party leader Judith Collins. Photo: ODT files
It is time the Government brought the Opposition into the Covid-19 tent — or left the tent flap ever-so-slightly open so that the Leader of the Opposition could take a peek in.

In normal circumstances, it would be worse than politically problematic to give Judith Collins even the slightest heads-up as to impending Government decisions.

The battle-hardened campaigner is champing at the bit to find new ways to undermine the still-popular Government and the Government is acutely attuned to the risk.

But these are not normal circumstances. A third of New Zealand’s population is living under Covid-19 Alert Level 3 restrictions and the rest are worried they will join them.

Parliament was due to be dissolved yesterday but that has

been put on hold while the country comes to terms with what the latest virus outbreak may mean for the future.

Our MPs may be recalled to Parliament to vote on measures to enhance the pandemic response. They may also be asked to vote to push out the date for the election.

Election season ought to be in full swing but the parties’ campaigns have been suspended now that large gatherings are banned and movement, in Auckland, is restricted.

We have endured plenty of change since Covid-19 forced the lockdown and then the economic slowdown, but we have seen little change out of Parliament.

While it is true the political parties have periodically worked together to help forge, amend and validate the pandemic response, that co-operation has had its limits.

The naive among us have periodically called for a grand coalition or a multi-party Cabinet to be formed to help the country meet the unfolding crisis.

This was a noble, but unworkable idea in a democracy where a needling Opposition is so vital to ensuring the Government is consistently held to account.

So if this cannot work, then what is wrong with simply giving the Opposition enough information to understand what is happening, on the understanding it might avoid confusing the rest of us?

It is an interesting notion that gained some traction yesterday when Mrs Collins said the Government abandoned convention in its increased response to the pandemic.

She said it was convention that governments did not make significant decisions during an election period without consulting the opposition. Ramping-up the alert levels was clearly significant and deserved more than a quick phone call from Prime Minister Jacinda Ardern less than an hour before they were announced.

In addition, her health spokesman spent much of yesterday seeking a meeting with the Health Minister to come to terms with the response.

Mrs Collins over-egged convention — governments can govern without consultation until the election — but she hit upon an issue that ought to be tackled next term.

The Covid-19 response is unique relative to many national crises in that it demands a clear and singular approach, and should be underpinned by public health science more than politics.

There ought to be plenty of opportunities for our politicians to unite behind the common health cause, and to clearly articulate health and policy solutions.

On the face of it, there seems no reason our leaders cannot have early, open dialogue about what will soon be public knowledge, or why there are not myriad chances for frank discussions.

New ways for constructive and efficient engagement should be explored on the basis politics cannot overshadow the health response. Our team of five million should expect even opposing captains to play as a team when it counts.

The media have reported that the first positive tests were a few days earlier. The Government claim there weren't informed about those tests because they may have been false positive. There is something very wrong with the disclosure on this.

I'd love to see the results if all of the so called 'team of 5 million' were tested. That would certainly bring some reality into the equation.
But that wouldn't suit the present narrative from our single source of truth.

Sounds like you are creating fake news. No evidence, just left wing gripes. National wouldn't be doing their job if they weren't challenging this inept government.

It is clearly to the PMs advantage to keep the opposition out of the picture and take front stage in the covid briefings. Given her background (and only skill) is PR it is iniquitous to continue to capitalise on this platform. Leave it to those who know what they are talking about - the health professionals - and be truly inclusive. After all, that's what she is always banging on about, now walk the talk for a change.

It must be hard and cruel for Judith to watch someone else by passing her with far better communication skills, not based on "crushing the other lot".
It's unfortunate Judith, that you still feel that way and make the wrong choices, you are not using wisely the power of making good solid choices. What a shame, but then again, you are surrounded by like minded people seeking to consciously hurt other people, so you don't know better, do you?. And yes when you do raise your eye brows, is it true that you are not serious, really Judith? Get real, grow up ....When do we really deserve to know you for who you are as a human, because at the moment you are failing deeply.