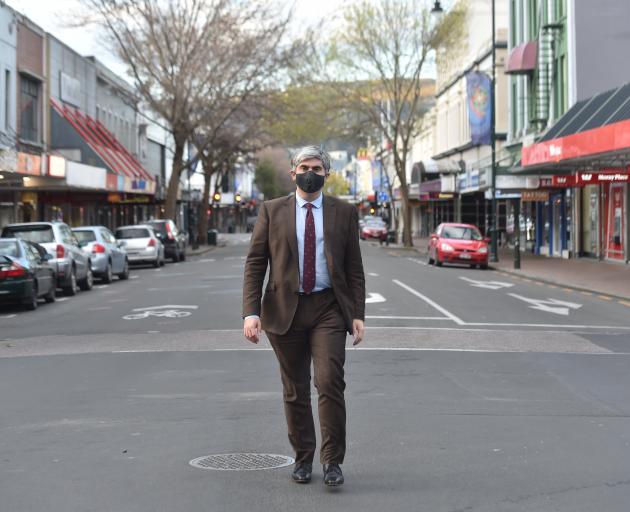 Mayor Aaron Hawkins on George St. PHOTO: PETER MCINTOSH
Mess with Dunedin’s main street at your peril, some of the opponents to the plans for a new-look George St appear to be saying.

Any degree of change to one of the city’s cornerstones is going to cause friction. And that is precisely what is happening when it comes to the Dunedin City Council’s vision for George St.

Change can be scary at the best of times. It is often hard to see the benefit of moving away from tried and tested ways of doing things. Only in retrospect, sometimes years later, does it become clear that, perhaps, matters have improved as a consequence.

In the midst of a global pandemic — with Covid-19 exerting its malign influence over all aspects of our daily existence and its tendrils seeking out ever more ways of upending the life we thought we knew — it is even more understandable we would want to cling on to the status quo.

‘‘If it ain’t broke, don’t fix it’’ has probably never been more relevant in some people’s eyes than now.

However, when it comes to Dunedin’s main street, it could not be claimed ‘‘it ain’t broke’’.

There have been rumblings for some time that George St retailers are not doing as well as they could be, if the thoroughfare could somehow be made more attractive to potential customers and interesting enough to keep them there for longer than just a half-hour visit.

At the moment, when the street is congested with traffic, it is not a particularly pleasant experience for anyone. Any buzz of excitement generated is easily offset by the difficulties faced by pedestrians crossing the road and for those searching for car parks.

Getting George St right for the next few decades — for pedestrians, shoppers, motorists and retailers — will be a delicate balancing act. Little wonder that the city council’s moves in recent weeks, to make it a one-way south route and a streetscape that is far more attractive for those on foot, have already polarised many.

Despite a stamp of approval for the revamp from the Otago Chamber of Commerce, once concerns about traffic flow had been dealt with and assurance given that work would stop to allow for Christmas shopping, some George St retailers have taken umbrage .

One of the most vocal is jeweller Brent Weatherall, who has personalised the issue by mocking up a dartboard with a photograph of Mayor Aaron Hawkins and effectively banning him from his shop.

Mr Weatherall has labelled the city council a joke. Previously he delivered a petition to the council bearing the signatures of 6500 people dead set against a redevelopment.

He doesn’t speak for all George St retailers, however, some of whom support the changes.

The question is, what initiatives have these retailers actually taken themselves to attract extra people to George St, be it market days or family days?

Mr Hawkins appears to have taken Mr Weatherall’s bombast on the chin, saying he understands there will be a spectrum of opinions about the changes.

The city council needs to put such personal invective to one side and focus on doing a fantastic job on Dunedin’s showcase shopping street.

We need to remember George St has a character that other cities would die for.

Do you mean 'ignore' personal invective? It's not coming from the council.

City centre = finite space.
Dunedin = growing population.
Gridlock already a recurring problem.
How does reducing options for traffic help this scenario?
And if your answer is that Mr/s Citizen will walk/bus in from Shiel Hill/Bradford/wherever to buy their 6 bags of groceries, replacement kettle and gift for so & so's birthday etc, etc... then, respectfully, you are engaging in some wishful thinking.
Having deterred the greater population from accessing the area, the only 'stories being told' in our town centre will be by drunken bar patrons, beggars, street kids and street cleaners sweeping up glass & cigarette butts. Charming.

I as a proud Dunedin local, DO infact catch the bus into town from the suburbs several times a week and the weekend and do my groceries. The service is great... costs $2 and I have no parking issues. While in town I walk the main street, have a coffee and browse the shops. All of this will be better with decreased traffic noise and pollution.. safe crossings and better ambiance. Thanks DCC for being brave and looking after our future generations.

That's wonderful for you. Well done.
Many folk cannot manage to carry 'x' number of bags of groceries and any other purchases without a car. And those cars still need to access the central city.
So for the final time, how does a growing population, needing to access a finite space (our inner city streets) with vehicles, benefit from decreased roading in the central city??
To spell it out - this is about more than George Street. It is about the effect of tampering with a major thoroughfare on surrounding streets. So far, not one person had managed to answer that simple question.

What a load of rubbish. Where else can people go apart from the CBD to do their shopping? Dunedin CBD has no competition from suburban shopping malls - and long may it stay that way. If council continue to put the squeeze on the retail area, then it won't be long before the country's mall developers seize the opportunity to open up suburban malls that are specifically designed for the motor vehicle and then the CBD will start to turn up its toes. It happened in Christchurch, Hamilton and Tauranga to name a few and their CBD's are all now beyond the point of no return.

Does not make sense. George Street - as a throughfare - has existed since the near beginning of Dunedin as we recognise it. Landlords and city folk are expected to maintain buildings, facades, the iconic landmarks of Dunedin - yet the DCC can ignore that history? Surely the benchmark is the near-empty cycle lanes the Mayor 'peddles' as a measure of some councillors understanding of the flow of life in Dunedin?

A local referendum would give residential and business ratepayers a fair say; why would the Mayor not chose that option?

Overall the shopping in Dunedin is very limited and decent restaurants do not exist. It’s easier and cheaper to buy on line. The penny pinching Scottish mentality has economically shot Dunedin in the head. The George Street upgrade sounds like something out of the 60s but with the people running DCC that is not surprising. Without a vision the people perish; and that is what has happened to Dunedin’s CBD.

Totally agree. Buy online. Better prices and free parking. DCC has destroyed the CBD. It would be nice to have a Mayor and council that represented the people instead of what we have now!

"We need to remember George St has a character that other cities would die for." Please tell me - what is so special about it?

Whilst there is a lot of potential in revamping George St, the reality is that this council will blunder its way through it because the ones in charge have no grip on reality and live in a green hazed world they believe everyone should live in...

Dunedin is too spread out and currently does not have enough people that live in the central area to fully pedestrianise George Street, so well done for putting that to bed. If the plan to reduce the volume of traffic allows restaurants to have more out door seating and was combined with additional parking buildings one block back, with park and ride options further out for commuters to use the cycling paths or buses, then that feels a good balance. If there was some way to bring back the trams in a loop from the Exchange along Princess / George Street to near the Uni then back along down past the new hospital and supermarkets to the Train station/Toitu/ Steamer basin and back up that would create an integrated retail and a leisure space uniquely Dunedin. We can all dream.