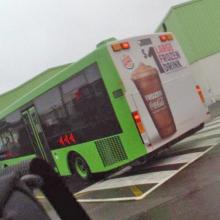 Public transport advertising
The recently reported findings of University of Otago research into children’s exposure to marketing sound shocking, but they are likely to be only part of the picture.

The research, involving a sample of 90 children aged 11-13 in the Wellington region, analysed shots from cameras the children wore during their waking hours in a four-day period in 2014-15.

This group was part of the Kids’ Cam project which involved a total of 168 children. Earlier reports from the study raised concerns about the amount of unhealthy food and drinks the children were consuming (on average, five times a day) and that children were exposed to 217 junk food advertisements daily.

The latest results show children were exposed to a mean of 554 brands in a 10-hour day, which is almost a brand a minute.

The means showed that the highest daily exposure was to food and beverage branding, making up 20% of the total exposures, with clothing next on the list at 12.1%.

This would not be a big deal if the food and beverages being promoted were fresh fruit and vegetables and water, but the researchers found participants were exposed to more than twice as many harmful commodity brands per day than healthy brands, including non-core foods, alcohol, and gambling.

The researchers drew attention to the high marketing exposure occurring in schools — 43% of the total.

Brands seen in the home made up 30% and in-store brand labels, product packaging and signs seen in stores accounted for a further 12%.

As the paper states, regardless of the nature of the marketing in schools, ethically it can be argued such marketing ‘‘is morally unjustified because children in schools are a captive audience and one that is vulnerable to the persuasive appeals of marketing, especially when they are endorsed in a context of implicit institutional authority’’.

It is hard to imagine children of a similar age 20 years ago or more would have been subject to such brand bombardment.

It might be easy to shrug off the situation exposed by the research as just part of the modern world and something we all just have to get used to, but the researchers point out that marketing can encourage over-consumption, which is potentially harmful, not only to the children at this point in their lives, but to their and the planet’s future.

Sadly, it came as no surprise that children from the poorest households were exposed to significantly more harmful commodity brands than other children.

Public health advocates have been highlighting the ubiquity of fast food and alcohol outlets in poor areas for years.

It was encouraging to see that exposure to tobacco marketing was described as rare — less than one exposure a day and on product packing only. Smoke-free messaging was more commonly seen. This shows the impact stringent controls can have.

In 2017 (a few years after the study data was collected) the industry-funded Advertising Standards Authority created a new code for children restricting marketing of unhealthy food and drinks, but while it may have made some advertisers more aware than they used to be, it is far from being the answer.

The reported findings are literally only part of the picture not just because of the small sample size.

The explanation of the study’s limitations suggests the children’s exposure is likely to have been underestimated, because of the conservative way images were coded, and also because on-screen marketing was under-reported as poor lighting affected screen shots.

We welcome plans for further research, including exploration of the school situation and a new pilot study using software to record screen exposure to gain better understanding of the nature and extent of branding seen on electronic devices.

As difficult as this might be, it will be simple compared with deciding how to reduce the exposure and getting action on that.

Public health seems to be a perfect job for a socialist. You know you don't have to buy everything you see in an advertisement? Is there any room for human agency in the worldview of a public health professional? Must we all submit to your authority in terms of what products and specials we are allowed to know about?

Are you a child?

If so, well done for rebelling against commercial persuasion.