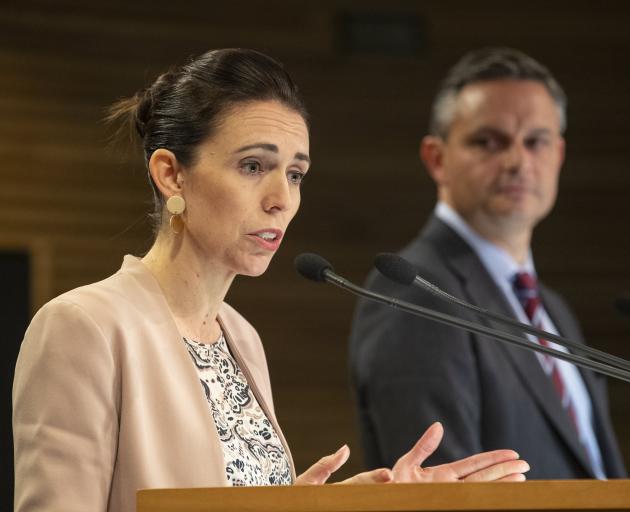 Labour leading, Greens in the background. PHOTO: THE NEW ZEALAND HERALD
To the victor go (almost all of) the spoils. And to the plucky little offsider go a couple of tasty crumbs.

There will be a Labour government but, as expected, it will have just enough of a green tinge to make voters of that persuasion happy.

It followed the decision of 85% of the 150 Green delegates who met on Saturday night to agree to Labour’s offer, unique in the history of New Zealand MMP in that a party with a majority is inviting another to play a major role.

Ms Ardern said it was "fantastic" to have the agreement formalised. Mr Shaw called it a "win-win". So, everyone goes away happy ... for now.

Labour — under no obligation, remember, to give the Greens anything — gets to preach its message of co-operation and stable government as the recovery from Covid-19 continues; the Greens, while not formally in coalition, feel they get to have a strong(ish) voice in government.

Labour has made the smart decision. Its "clear mandate" to form a majority government does not make it immune from criticism from the left flank as well as from the right, and keeping its Green buddies in the house (well, in the sleepout, at least) makes clear sense and lowers that risk.

When push comes to shove, Labour knows it still retains absolute power, that this agreement does not remotely act as a handbrake to Labour’s journey over the next three years.

And, this agreement is not really about the 2020 election cycle; it is obviously more about 2023, when Labour will be trying to win a third term in office, and might well need a happy Green Party on its side.

For the Greens, this agreement is effectively as good as they could have wished.

They came to the table with little leverage, due to Labour’s majority and the need for Ms Ardern to reward as many of her own MPs as possible with ministerial roles.

Is this agreement really a win for them? Shaw has rejected suggestions the Greens will be gagged, and will still have plenty of opportunities to challenge the Government, though they are committed to supporting the Government on confidence and supply for the full term.

But it must be tempting for some to wonder if the Greens might have considered staying outside — all the way outside — so they could properly agitate from the left and from the environmental standpoint.

Do they run the risk of making some noise — they have said they will keep pushing for the wealth tax, for example, an idea that seems destined to go nowhere any time soon — but not being properly noticed?

Mr Shaw and Ms Davidson have had a taste of being ministers, and have accepted the opportunity to again serve in major roles. Their task is to avoid feeling flattered at being invited to the top table, and make sure they are not just the guests that can be seen but not heard.

The Liberal Party (UK), was neither left nor right. That didn't go too good. United Future was seemingly non aligned.