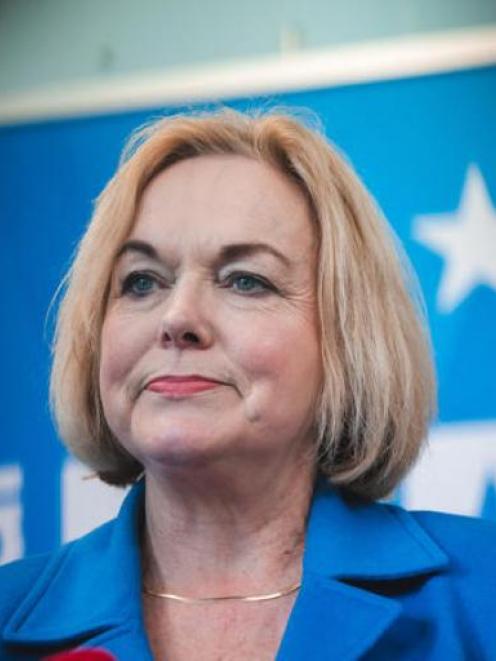 Judith Collins. Photo: RNZ
The sideshow of Judith Collins’ National Party leadership may appal or occasionally entertain but whether it is good for democracy is another matter.

With the existing parliamentary set-up where Labour has a considerable majority and might be at risk of thinking it can more or less do what it likes, it is more important than ever there is a strong and cohesive Opposition.

But anything credible Ms Collins may say (and yes, she can sometimes say sensible things) is drowned out by her next clanger. No sooner had the furore over her insulting accusations about microbiologist Associate Prof Siouxsie Wiles’ lockdown behaviour subsided when she was snapped without a mask herself in breach of Level 2 rules.

It might be seen as petty point-scoring when people gleefully raise these issues, but if the tone of debate has been lowered then Ms Collins bears much responsibility for that.

It is not good enough for her to say on the one hand she wants the party to concentrate on the issues that matter and then allow herself repeatedly to be side-tracked into nastiness.

She needs to be able to calmly cope with any questions even when she does not like them. Just yesterday Ms Collins pulled out of her regular RNZ slot apparently because she was to be asked about some resignations from her office. Perhaps she was trying to avoid a damaging encounter, but it was not a good look. In a Newshub interview the same morning she made some relevant points about the dangers of employers making vaccination against Covid-19 compulsory for employees, particularly if they were not in a high-risk situation.

If the party wants voters to believe it has something to offer, then it must present a disciplined approach to issues and point to possible solutions alongside criticism.

It is not as if there are a shortage of issues it could get its teeth into, but valiant attempts from some of Ms Collins’ MPs are being undermined by her grabbing the headlines for all the wrong reasons.

One issue which needs some scrutiny is what has happened to the all of government approach to the Covid-19 response?

Why was it that there was such slackness around travel arrangements for released prisoners crossing from Alert Level 4 to 2 that resulted in a bailed person contracting Covid-19 and likely going on to infect others in his household?

When the decision was made to have different alert levels across the country, was there not an assessment of all the scenarios across all government departments which might provide a risk? Could nobody foresee there were accidents waiting to happen? At least 24 other prisoners crossed Covid level boundaries.

Moves have been made to shore up the situation now, but we have seen this after-the-fact approach all too often.

Closer to home, this week we reported the damning results of a leaked internal audit of compliance with Covid-19 protocols at the Otago Corrections Facility.

Prison management have tried to put a positive spin on their protocols’ oversight now the audit is before the public and have suggested that some of the behaviour observed on the day of the audit check was not typical. This is not convincing. The whole point of such protocols is that they need to be adhered to consistently. The concerns identified by the audit should have been obvious to anyone who was paying attention when managing staff day-to-day.

Issues such as lack of physical distancing, sick staff attending work, poor mask compliance, not wearing the correct Personal Protective Equipment (PPE), improper disposal of used equipment, and failure to ask screening questions of those arriving or use the temperature-checking device seem astounding at such a facility.

We need a convincing and immediate assurance that this laissez-faire approach to protocols is not mirrored at our other prisons.

It must be hard at the mo for our right wing media. The only negative stories on the Nats comes through the over 100 cartoons lampooning them or Collins. The story themes are all “how unfortunate Nats aren’t in govt”. I have not seen one piece of policy from the Nats. Only constant criticism, which the media join in on.
I challenge people to stop listening to the media interpretations of what the govt does and stop listening to talkback radio and instead actually watch Question Time on Parliament TV.
Jacinda is just too good and one after the other yesterday spat out Collins, Bishop & Seymour – mostly without notes.
A reminder folks not seen in the media. The Nats would have had an open border with Aussie and China last year, over 5,000 Covid deaths and just as much money borrowed. Not one article reminds you of the 80 Billion borrowed by Key/English. They were allowed to.
Covid has been handled well here folks. Don’t believe the editorials otherwise. We don't need an opposition at the mo - but like during the war, a united Nats supporting the govt and their officials (police army doctors).
Stop the negativity on Jacinda and get vaccinated and stay within the rules.

Times have changed and a lot of people obviously vote for the brand of the leader rather than policy. Labour only released a brief manifesto a week before the last election and much of the policy they have introduced since wasn't in it. If National want to get back in it has to be off the back off a smooth talking commercial brand of a leader.

This is an editorial that needed to be written but I can’t help but think that your analysis has missed a couple of key issues,
Firstly, it appears you have made an underlying assumption that Ms Collin’s self destructive behaviour is something she can control, that she has the ability to turn it around and appear rational. I believe that she does not have that ability, that what you see with crusher is what you get. She just does not have the ability to change.
The second thing.is that you have short memories. Surely you remember the days when Phil Goff as leader of the opposition could not garner any media or public support and the Labour Party fell dramatically in the polls. Remember he was replaced with a succession of David’s and others as leader of the opposition and none of these gained any traction or public appeal until Ardern was chosen and turned their fortunes around. Remember, Key and his coterie of sycophants crowing about it. Politics is cyclical, this up and down flow of popularity is a part of our system and can be tracked over the last 100 years.
What is unknown at this stage is, will crusher’s delusional intransigence totally destroy the national party.