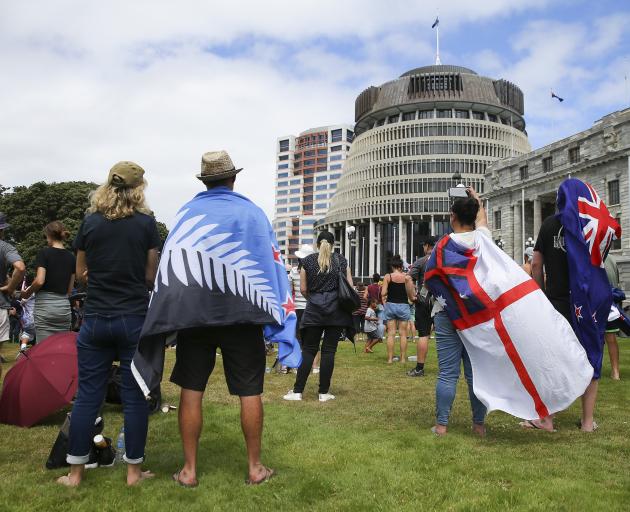 Convoy protesters at Parliament. PHOTO: HAGEN HOPKINS/GETTY IMAGES
Anyone who has ever taken part in a protest will be able to recall the enthusiasm they felt, the camaraderie, the hoping against hope this would make a difference.

It can be hard to tell. The tens of thousands who took part across the country in the 2019 September climate change march, for instance, might wonder how far the urgency of that message went.

They might also wonder at the carbon footprint of Convoy 2022 with its thousands of gas-guzzling vehicles heading towards the capital to protest about the Covid-19 vaccine mandates and ongoing restrictions and rules. Incongruous, too, at a time when there is concern about high petrol prices.

The timing of the protest is out of kilter with what is happening with Covid-19 controls given that the Government has recently announced plans for opening the country.

This copycat of the truckies’ convoy in Canada is not on a par with the climate change ones, but there will be some sympathy for parts of the travellers’ cause, particularly among those who support vaccination but may consider the reach of workplace vaccination requirements is excessive.

There will also be some uneasiness about such a group, most of them likely to be unvaccinated, travelling around the country at a time when the Omicron variant is beginning to take off.

There were some funny moments along the journey when attempts were made to send the convoy off course, and the convoy’s shared song playlist was tampered with to include songs which did not find favour with organisers, including Why Don’t You Get a Job.

As we have seen with the Groundswell protests, such events attract those with other agendas. The appearance of flags in support of Donald Trump’s re-election in 2024 will not have been helpful to the cause.

Mostly, the protest appears to have been peaceful, but it will be interesting to see how long the illegal camping on Parliamentary grounds will be tolerated and how sympathetic Wellingtonians will be to ongoing snarl-ups on inner-city streets. In the early stages, police and other officials were wise to play a low-key role. Nobody will want to be encouraging martyrdom but there will be limits to the authorities’ largesse. Perhaps some in the Beehive will be frantically rain-dancing in the hope a good drenching will solve the camping issue.

However the campout goes, it is difficult to see the convoy having an influence on the Government’s thinking.

Closer to home, it has been sad to see another defacing of Caversham-based health centre Te Kaika’s vaccination and testing centre in St Kilda.

Included in the messaging were references to Rory Nairn, the Dunedin man who died of myocarditis last year weeks after receiving his Covid-19 vaccine.

That vaccine was not administered by Te Kaika, but Te Kaika chief executive Albie Laurence has said he wants to have a hui with Mr Nairn’s friends and whanau.

"We want them to know what we are trying to do," he said.

We hope this gesture is taken up because the Te Kaika story is one worth listening to.

Its impact since it was launched almost three years ago has been impressive. It has a village concept of healthcare, where it partners with others to cater for the whole of a patient’s needs, addressing not just mental and physical wellbeing but helping with other aspects of their lives such as benefit entitlements, budgeting advice and housing.

Innovation is second nature to this organisation and it has been at the forefront of the Covid-19 vaccination programme in the South, organising drive-through vaccinations, partnering with Maori and Pasifika students’ associations to run a mass vaccination clinic at Forsyth Barr Stadium, and organising Dunedin’s first vaccination bus.

Forcing this not-for-profit organisation serving an underserved community to spend tens of thousands of dollars to repair damage is not legitimate protest. It is criminal, unfair and, to use Mr Laurence’s expression, wrong-headed.