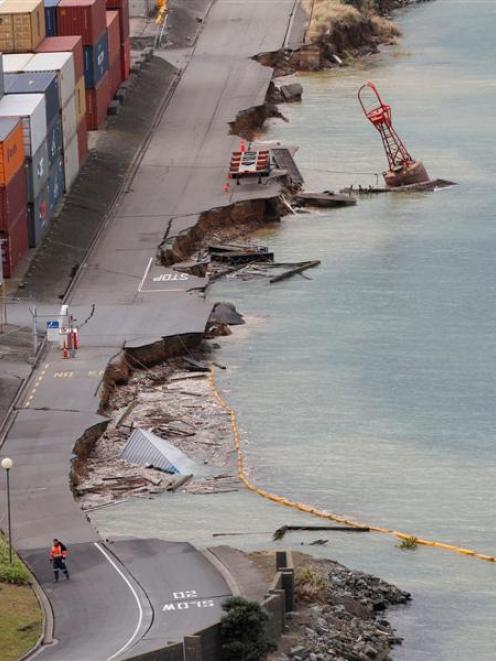 CentrePort staff inspect the damage to their reclaimed container wharf as a result of the earthquake in Wellington. Photo by the NZ Herald.
While none of them were ''the big one'', the Seddon earthquakes at the weekend - especially that of about 5pm on Sunday evening - gave us all a jolt.

Although felt by few in Otago, unlike in Wellington, the quakes' repercussions have and will spread across the country - psychologically and financially.

Generations grew up with the horror of the Hawkes Bay earthquake of 1931, which killed 256 people. It was prominent in the minds of the nation for many years, although this acute awareness eventually dissipated.

While serious earthquakes occurred in the intervening years, nothing on that scale rocked New Zealand until Christchurch in 2010 and 2011.

Wellington, as the centre of government, has always been seen as especially vulnerable, being built on a major fault line. It was the capital, rather than Christchurch, that traditionally seemed at risk of massive damage and dislocation.

Thus, when central New Zealand shook on Sunday evening, residents had their hearts in their mouths.

Images of Christchurch's collapsed CTV building, Colombo St, and cars sinking in liquefaction might well have been recalled.

As it turns out, the rumblings throughout the weekend were not the Wellington fault rupturing, but rather movement off the coast of Marlborough.

As it happens, also, damage - while widespread - does not seem to have been huge.

Nonetheless, the costs will mount quickly, and a clearer picture will only emerge in the coming days and weeks as to how much this will all cost.

And it is us all, through the Government, who will have to pay because the Earthquake Commission's reservoir is drained.

This week, it might also become clearer how much damage was caused in Seddon, Blenheim and other parts closer to epicentre than Wellington itself.

With New Zealand already facing soaring insurance costs after Christchurch, it must be hoped both the aftershocks fade and insurers do not themselves become too wary of the Shaky Isles. T

here had been indications the reinsurance market was becoming more competitive again and that insurance rates were levelling off.

Economically, the last thing this country needs is a financial setback as it continues to strive to recover after the global financial crisis of 2008-09. There are, as well, fears that uncertainty and anxiety about earthquakes could discourage investment and potential migrants.

Wellington is another reminder we should all have in place basic supplies and basic mental preparation, being ready to ''drop, cover and hold'' as necessary.

Remember, Christchurch was not supposed to be high-risk before the unknown Darfield fault fractured and the second quake close to Christchurch under Banks Peninsula let rip with its phenomenal ground acceleration.

The largest overall threat to the South Island appears to be the Alpine Fault.

When it goes again - it last ruptured in 1717, said to be the seventh time since about 600AD - it could do so with ferocity.

Extensive damage and loss of life could be expected on the West Coast, with damage to weak buildings and the risk of loss of life possible across into the west of Central Otago and the lakes district.

Dunedin and the east coast could well be far enough away for the effects to be less.

A higher danger there would appear to be from smaller nearby faults, or perhaps from a fault as yet unmapped.

Especially prone would be areas with softer soils, like South Dunedin, the Taieri and reclaimed land.

Everything seismologists say is predicated on probabilities because, fundamentally, they say they have no way of knowing where and when earthquakes will occur.

This is an unpredictability we can all do without.

The agonies of Christchurch have proved truly dreadful - not just at the time, but for years afterwards.

They remind us the threat of earthquakes in this beautiful land of ours is just something we have to live with.