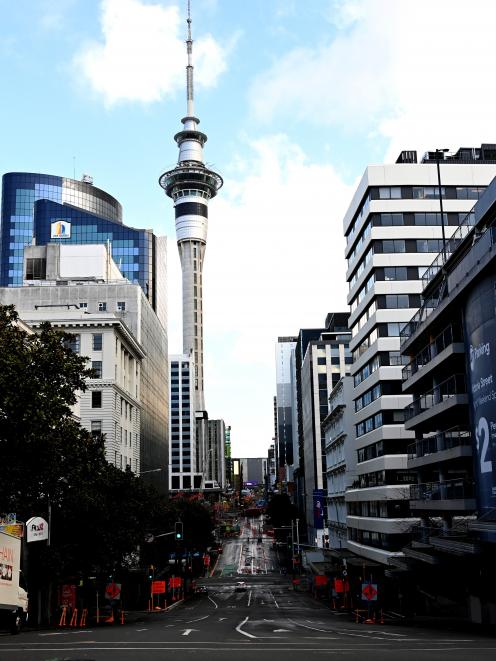 Auckland City has dropped to Level 3. PHOTO: GETTY IMAGES
Barring any further unpleasant surprises, the population of New Zealand’s largest city by far should be enjoying the steamy delights of takeaway coffee this morning.

It seems somewhat trite to equate an important Covid-19 alert level change with the here-one-minute, gone-the-next, thrill of a hot drink or tasty snack. But for many Aucklanders, that is what they will have been craving most — along with freedom and being able to see family and friends — over the past five weeks of Alert Level 4 lockdown.

As we all know only too well, access to takeaway food and a few hitherto closed shops marks an important step on the voyage back to some semblance of normality. But as we also know, that step is just a small one, and one of the few tangible differences between Level 4 and Level 3.

To all intents and purposes, Aucklanders are still in lockdown and will remain that way for at least another fortnight.

The Government left itself with little option on Monday but to move Auckland back from the top tier of lockdown. It had been hinting last week it was likely to happen, providing the authorities had a good understanding of the genesis of each day’s new cases.

Not to do so now would have caused extreme frustration, anxiety and anger. As some experts have said, there comes a point when the mental health of a city’s citizens becomes just as important a consideration as their physical health.

However, a significant curve ball for the Government in making this week’s decision — one of many thrown out by the Delta strain of Covid — is the awkward emergence of a new outbreak with worrying possibilities in a small area of North Waikato by the Hauraki Gulf.

While Auckland has slipped down an alert level, the area on its back doorstep, around Maramarua and Mangatangi, has been designated a bespoke Alert Level 4 enclave, in the hope of containing the virus there.

For the rest of us across the country, there is no change to our Alert Level 2 status, just an increase in the number of people who can be at indoor venues, from 50 to 100.

Some may be asking why we have not dropped to Alert Level 1, but Level 2 remains the most sensible precaution.

We have seen how fast the Delta variant can spread, and we don’t want to end up struggling to cope with the same situations as New South Wales and Victoria have found themselves in.

The rest of the country really does owe Auckland a debt of gratitude. People there have been on the frontline of the fight against Covid, whether they like it or not, and have had to cope with many more days in, and periods of, lockdown than the rest of us.

It’s a teeny-weeny bit sad to hear the French are upset with the recently announced security pact between Australia, the United Kingdom and the United States, known as Aukus.

They are, in fact, livid at the Australian Government dropping them like a hot pomme de terre over a nuclear submarine deal they thought was in the bag.

It is worth reminding the French that New Zealand too has been left out in the cold by its traditional allies over this agreement, allies we thought were far closer to us than to France.

The irony of them being upset is rich indeed.

When the French spent decades testing their nuclear bombs in the South Pacific, or when their spies blew up the Rainbow Warrior in Auckland and murdered a crew member, they didn’t give a damn who they upset.

Having been a little dismissive of Auckland angst, I now realise it's a different culture from some isolated South Island climes of 200 inches of rain a year, many sheds to work in, and Rainforest.