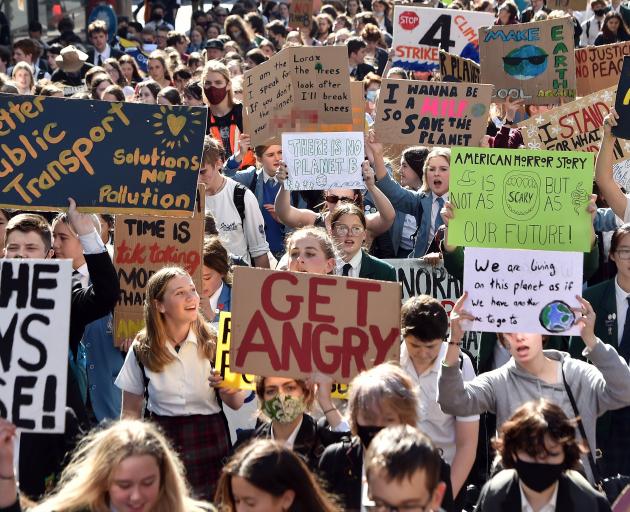 This could include accusing them of just wanting a day off school, questioning their commitment or their use of car travel, or claims that such protesting is pointless.

It is always easy to find things to criticise in young people, and history tells us this has been going on for centuries, but dismissing their behaviour in this instance as some sort of fad they will grow out of is cloth-eared thinking (and likely cloth produced from man-made fibre).

These young people know action on environmental/climate issues is too slow. An illustration of this slowness at joining the dots came less than a week after the last Climate Strike protest, in a report called Our Land 2021.

This joint report from the Environment Ministry and Stats NZ follows a 2018 report with the same title which looked at a variety of issues around land. The latest report zeroes in on how intensively we are using and managing land.

It is depressing reading. We could describe it as not good news, but the trends shown in the information the report has gathered are not new.

What it shows is that highly productive agricultural land is being gobbled up by housing developments at an alarming rate.

When it is considered that only about 15% of our land is ideal for food production, it is disturbing to realise the amount of highly productive land lost to housing increased by 54% between 2002 and 2019.

This loss of good land to housing is not new — concerns around the fringes of Auckland date back to the 1950s.

And, in a recent Environment Court decision, it was estimated that over the next 35 years up to 31,270 hectares of that region’s most productive land could be lost to housing.

When desirable land is not available for agriculture, it means less suitable land is used, requiring more fertilisation and irrigation which can lead to adverse environmental impacts, something we are all too familiar with from the dairying boom.

The amount of food being produced has increased since 2002, even though 14% less land is being used.

Horticulture NZ chief executive Mike Chapman, in an RNZ interview, described the Our Land report as a call to arms, adding that it was getting nearly too late to do things which will make great sense.

He says we can have houses and we can have healthy food. But we must find a way to ensure highly productive land is kept for production so we can feed the country and meet climate change commitments.

A National Policy Statement for Highly Productive Land is expected from the Government by the end of the year. This is not expected to provide absolute protection of highly productive land but would require local authorities to proactively consider the resource in their region or district to ensure it is available for present and future primary production.

The 2019 consultation document on this said councils would have some flexibility in how they applied the protection from inappropriate subdivision use and development and it would not impact on existing urban areas or land councils had identified as future urban zones.

It is disappointing this NPS has not been afforded more urgency. Let us hope when it eventually turns up it is strong enough to provide the protection needed.

As Secretary for the Environment Vicky Robertson and Government Statistician Mark Sowden say in the preamble to Our Land:

"Land is our turangawaewae, our place to stand. It is on loan to us for just a fraction of its ecological journey through time. Our collective challenge is to ensure our decisions today consider both the whole environment and the future generations into whose hands we will entrust this most precious asset."