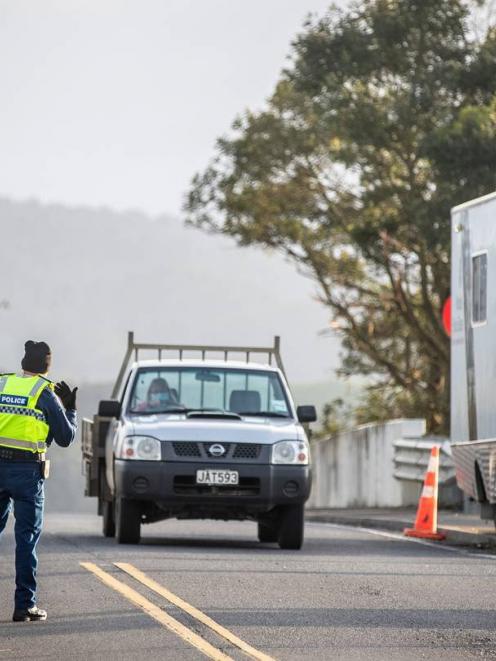 The border at Mercer, Waikato.
Invisible lines running through the landscape, divvying up this from that, north from south, Alert Level 4 from Alert Level 3.

Borders have huge repercussions on people’s lives. Yet often they can be pretty arbitrary — dashed lines scratched hastily across a map by officials to separate one side from the other, splitting asunder families, lives and livelihoods.

Borders also tend to follow major topographical features, such as mountain ridges, watersheds and major rivers. In such cases, these boundaries appear more significant and to have more standing than those that cut across fields and roads, because of the sheer physical challenges involved of crossing them.

Also, what lies on either side can be quite different, not only in terms of the political, cultural and social characteristics that have developed over the years, but also with respect to the natural world, such as vegetation, weather and climate, and soil types.

The sight of a closed border in New Zealand, with free passage at the discretion of police, comes as a bit of a shock, therefore, despite it existing for very good reason and hopefully for the shortest amount of time possible.

The North Waikato town of Mercer is ground zero in the battle to contain the Delta strain of Covid-19. It is where the relative freedoms of Alert Level 3, the coffees, takeaway meals and slightly extended bubbles, change to the much stricter Auckland lockdown of Alert Level 4 in the space of a few metres of highway.

New Zealanders are not used to internal borders, at least those which come with police checks. We have boundaries, of course, but they are territorial ones we can pass through without being stopped and needing to show the right paperwork.

When there are no Covid-19 restrictions, hundreds of people every day drive across the State Highway 1 bridge over the Waitaki River, which roughly marks the boundary between Otago and Canterbury, with a few little nooks and crannies as an exception on its southern bank.

Cook Strait, of course, provides our most obvious physical border. In fact, several decades ago it was the focus of some in the South Island who wanted to secede from the North Island.

‘‘Cut the Cable’’ was the frequent cry, though that would have backfired many times over when we have needed North Island electricity sent south due to low hydro-lake levels.

The apparent randomness of some borders verges on the ludicrous. In Mercer, one side of Koheroa Rd was initially in Level 3 while neighbours across the street were in Level 4, with one resident in that sector unhappy with being able to see those over the road eating KFC.

Despite the inconvenience, and slightly chilling prospect, of the North Waikato border, we have to accept it is the best thing for now and that it will probably not last more than another couple of weeks.

We also need to remember our maritime border has been of huge benefit in protecting us from the worst of the pandemic.

Chilling? Do the Continental.

I guess when a boundary needs to be drawn, whether on a map to categorise some aspect of our existence or a $ amount to indicate an entitlement to state support there are always going to be people who just fail to met the criteria and miss out on something they want.
I’ve been in that situation more than once.
Makes life interesting.