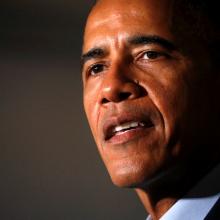 Barack Obama.
Barack Obama started his tenure as the President of the United States with such hope. The first black president of the US is a skilled orator who promised so much, not only for African Americans but for voters who felt disenfranchised and left behind.

Along with his wife Michelle, Mr Obama was living proof African Americans could achieve every goal to which they aspired, as long as they overcame the obvious racial barriers still prominent in the US.

As he prepares to leave office next week, the adulation is flowing for Mr Obama but how will history view him?

The legacy Mr Obama will leave is already being unravelled by critics on both the left and right of the American political spectrum. And if president-elect Donald Trump can make good on his promises, Mr Obama’s contribution to global politics will be consigned to the back end of history.

The most obvious legacy Mr Obama will leave is the economy which, although far from perfect, is in much better shape as he leaves office from when he entered. Mr Obama will end his administration with the second-largest fall in the unemployment rate during a presidency since the New Deal helped pull the nation out of the Great Depression.

As Mr Obama took office amid the depths of a recession, the unemployment rate was 7.8%. Last month it was 4.7%. But the fall is partly because some workers have stopped looking for work, suggesting many Americans who could be working are instead sitting on the sidelines.

The second legacy will be Obamacare which Republicans are promising to overturn by late next month. The aim of the Affordable Care Act was to extend health insurance coverage to some of the estimated 15% of the US population without it. Those people receive no coverage from their employers and are not covered by US health programmes for the poor and elderly.

It is estimated 22million will lose medical insurance if Obamacare is repealed. Provisions of the law make care accessible to those who have previously been shut out and the uninsured rate has dropped by 5% since the programme began. There are problems with the scheme, but making healthcare more affordable for the elderly and less well off must surely be recognised as an achievement.

Mr Obama’s foreign policy stance has been something of a mishmash and influential commentators say he will leave behind an uneasy world. It is with irony Mr Obama, elected and re-elected on a platform of ending wars in the Middle East, will, at the end of his presidency, leave the same situation  he inherited, decried and swore to avoid. The world is not a safer place; violence and war continues from a terrorist organisation with no geographic boundaries and no clear military or strategic objectives.

The promise to close Guantanamo Bay was not kept although Mr Obama secured the transfer of many of those incarcerated to overseas jurisdictions. Finally, the harshest criticism right now is coming from the very community Mr Obama was expected to represent the most honestly — African Americans, many of whom now say Mr Obama was black, just not black enough. Under his presidency, young black men were killed in disturbingly high numbers. Mass shootings increased and Mr Obama failed to institute tighter gun control laws.

There is an impression Mr Obama cared more about the safety of police and property than the lives of young black men. The problem lies with America. For Mr Obama to serve more than one term, he could not be too black. And so even the most powerful man in the world was hampered from fully achieving his goal of improving race relations.

Mr Obama has spent the last few months of his presidency trying to save his legacy by pushing through measures to protect the things he holds dear. History will not initially be kind but hopefully, the best part of Mr Obama’s legacy will be revealed as a new administration does its best to unravel it.

True. To repeal ObamaCare on ideological grounds, with nothing yet to replace it, is self defeating pique. The plan is to make Healthcare unaffordable? The gun lobby would not allow firearms reform. Rather than saving the banks in 08/09, the administration should have let them sink or swim, Free Market style.

no the world would have gone into a 1930s slump if they did not support banks.. it was about the only thing Obama did right...... all the rest was talk....