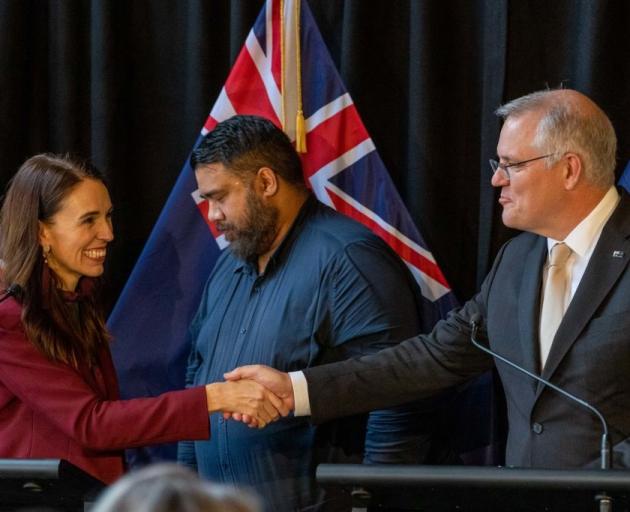 Bless — absence has made the heart grow fonder.

But we should not be too cynical. It was timely to see New Zealand Prime Minister Jacinda Ardern and her Australian counterpart, Scott Morrison, sharing the same space in Queenstown during their first in-person meeting since February 2020, when a little thing called Covid-19 changed the world.

The two-day visit to the South gave the transtasman leaders a chance to, outwardly at least, present a united front after a slightly rocky patch that involved the odd stoush over deporting criminals and some grumblings about China and suchlike.

‘‘We are much bigger than our differences,’’ was Ms Ardern’s soundbite. ‘‘Neither of us take that for granted. We are family and the pandemic has underscored that in many ways.’’

And, as she held aloft her Australian football shirt with ‘‘Ardern’’ emblazoned across the back, and he waved his New Zealand shirt with ‘‘Morrison’’ (not ScoMo?) on it, to promote the 2023 Women’s World Cup that will be co-hosted by the nations, it was impossible not to feel just a little warm inside about the resumption of Anzac relations.

Then it was on to the serious business — the ‘‘talks’’ that offered each leader the chance to clear the air, if indeed it needed to be cleared, and discuss issues ranging from the pandemic response to what to do about China.

The build-up to Mr Morrison’s visit had been stoked by the suggestion the Australians were unhappy with New Zealand’s ‘‘soft’’ approach to China, even though our country had joined theirs in a statement expressing concern about China’s treatment of Hong Kong, and another condemning human rights abuses against the Uighur Muslims.

Mr Morrison chose the diplomatic path, saying ‘‘those far from here’’ — to whom could he possibly be referring? — would not succeed if they sought to divide the transtasman allies.

But Mr Morrison also referred to the countries’ relationship with the US. By doing so, wrote Audrey Young in The New Zealand Herald, he was reminding us that we are ‘‘a formal defence ally in dealing with the area known as the Indo Pacific, and that requires obligations, not complete independence.’’

Serious stuff, then. But this was also an event of huge significance for Queenstown, hanging out for an influx of Australians — they don’t have to be senior members of a government, just willing to spend lots of money — to recover from Covid-19 devastation.

The media attention given to Mr Morrison’s visit will translate into massive exposure for Queenstown. Venues chosen for their scenic views will, hopefully, convince plenty of our ‘‘family’’ from across the Ditch to take their next holiday to the South.

It is a shame the departure of tennis superstar Naomi Osaka from the French Open has turned into a moral judgement on the behaviour and ethics of the media.

Osaka caused a stir going into the tournament when she said she would be boycotting press conferences, accusing the media of not playing its part in caring for athletes’ mental health, then withdrew, revealing a battle with depression and the need to take some time for herself.

That needs to be the focus here — a wonderful young player’s wellbeing, and the wider issue of the mental challenges faced by elite sportspeople; not the actions of a few reporters at a setting so famously banal as the ‘‘presser’’.

If anything, the criticism needs to be directed to the people who run professional tennis. They, as Sports Illustrated reporter Jon Wertheim wrote, reacted out of proportion to Osaka, sending ‘‘harsh, even menacing and humiliating statement, essentially threatening to ban her’’.

There is a middle ground here. We stand by journalists’ vital role in covering sport robustly, and we hope Osaka gets the space she needs to deal with her issues.