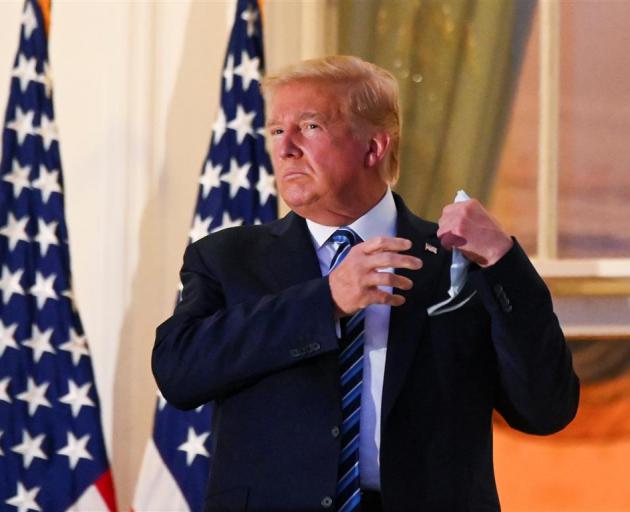 His opponent, Joe Biden, edges further ahead in the polls, both nationally and in most of the crucial battleground states where the election will be decided. Somehow, though, more than 40% of voting Americans still back the bombastic, narcissistic bully Mr Trump.

The president has returned from his brush with Covid to strut his stuff in Florida. No matter the lies and quarter-truths he spouts, adoring fans fawn over their hero. That is disturbing not just for what it says about his country but also about the fragility of democracy.

Given that Hillary Clinton was heavily favoured to beat Mr Trump in the run-up to the election four years ago, few — sensibly — are taking anything for granted.

Again and again, Mr Trump’s totalitarian instincts, corrupt practices and obnoxious attitudes and behaviour have been displayed. Again and again, his loyal base takes no heed.

Yet, while the views of Trump supporters on many issues might appal progressives, large proportions of that 40%-plus will be decent Americans living decent lives.

We, as human beings, are easily influenced and are capable of all sorts of beliefs, especially when they correlate with our personal or “tribal” self-interest. Psychologically, large parts of white middle America feels unease at accelerating economic, racial and social change and wants to ward it off.

Such circumstances are exploited by rallying cries like Make America Great Again. Such conditions enable the likes of Mr Trump in the United States and the far-right parties in Europe to win substantial support. In Hungary and Poland, with shallow democratic traditions, authoritarian leaders, with popular support, have knocked away pillars of free society.

In the Philippines, Rodrigo Duterte plays the strongman on law and order and overrides the rule of law through extrajudicial killings.

In Brazil, hard-right President Jair Bolsonaro — as popular as ever despite the ravages of Covid — has repeatedly pursued anti-democratic measures.

While the bow might be drawn a little long, there are even parallels with support from “ordinary” Germans for Adolf Hitler in the aftermath of massive economic disruption. Beware the populist bearing gifts and false hope.

It is scary how easily democratic and human rights are destroyed through the will of the people and the ballot box.

In the United States, the bombardment of lies, the attacks on media and “fake news” retorts have been creating a milieu in which democracy misfires. There are no basic shared facts and, subsequently, no shared standards and no shared backlash. There is no across-most-of-the-board disgust about and rejection of Mr Trump’s many misdemeanours and mistruths.

Would, in today’s climate, for example, President Richard Nixon have been forced to resign in the aftermath of Watergate? The Washington Post’s reports would have been fake news and, anyway, how bad was the break-in and the cover-up compared with what Mr Trump gets away with?

As many Democrats of most shades wisely recognise, the priority this election is to do what it takes to end Mr Trump’s tenure. Nominating a decent, bland candidate was a good call so as to give those small number of vital swing voters in those swing states a moderate choice.

Mr Trump must be dumped before more serious and long-lasting damage is wrought both to the US and its democracy. For democracy and a free society, even in the United States, is proving to be more fragile than we might previously have thought.

A 'Plutocracy' is pulling the strings, having propagated the myth of Washington and intellectual elitism, and allowed extremism to flourish.

But, you know, cue the President's online supporters..

Probably at the point where you believe the news or you don't. All I can say is I've purchased my airlines ticket for Trump's second swearing in. There is a higher probability of Trump being re-elected than a coherent thought rolling down the Hill here in Dunedin...that I'm sure of!

Thoughts don't roll off Hills.
I gather all of the non influential are processed by the Germanic machinery of Allied Press.

The friendship of boys is more loyal than girls!

Interesting that such opinions are ubiquitous in international media, yet the more relevant stuff about Biden's son serving with a Ukranian Oil giant and father meeting said executives, despite denials, big blank cheques, cocaine habits, are actively being suppressed by tech media giants.

This obvious bias will only make the problem worse and lead to violence. Which I more think these days, is the goal.

Not US media, and PB, you frequently refer to the inevitability of civil unrest.

I would be surprised if the word democracy resonates with any warmth from the Democrat camp. The Dems, like Labour governments in other countries, have made fools of themselves photo oping with any and all minorities, while forgetting the majority core constituent/voters. Aligning themselves with hysterical anarchistic movements like BLM, whose stated objective is to disrupt the nuclear family and rebuild society, if your political allies consider pulling down statues, defunding the police and rioting in communities across America as acts of courage and nation building, then you have a whole lot of hell waiting on your doorstep. How long before Joe (if elected) suffers a medical event and low and behold Kamala Harris steps into the presidency? Continuing an established legacy of hard left policy and social experimentation, ever fixated on gender race and identity. The same core issues that saw the UK Labour Party loose seats they had held for decades, and ultimately lose the election. Will they ever learn…?

Trump popular----and the ODT wonders?
Look at the opposition.
Trump corrupt?
A nasty lying statement.
Again, look at the lying Dems. for corruption on a grand scale.

Democracy is threatened when the long established elites don’t accept the results of an election and engage in some self reflection but rather have a hissyfit, blaming everyone but themselves.
The two biggest employers in the US are now Amazon and Walmart which are basically distribution networks for products made in China, targeted at the low paid. Those same products were once made in the US. That is how the wealth gap was created.
The same thing has been happening in NZ as we continue to export commodities instead of products.
We need a fighter for the worker as well. We need to get rid of the ideologies and actually fix the real problems too.
Great to read the ravings of another elitist, having another hissy fit, projecting what they actually do onto others.
Democracy is about the people cleaning out the elites at the ballot box. When the media is taken over by those in power, that is what leads to war.

Hmm...the base energy for Trump makes it unlikely he will lose. The polls are wrong! Republicans are winning early voting. They have more enthusiasm for their candidate. Biden is a career politician with little to nothing to show for his 47 years in office. Everything Obama tasked him to do he screwed up. Obama won his last election by 7%. The polls say Biden is going to win by 12%... don't think so. Biden isn't Obama. If Biden is winning, why is he in hiding? Why are his crowds of supporters non-existant! Biden isn't winning, if the media was honest and not picking sides it would be clear Biden is doomed.