The rights of rodeos and animals 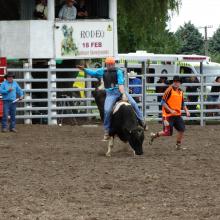 Connor Sandri, of Oamaru, holds on tight as he competes in the second-division bull ride at a Waimate Rodeo. Photo: Daniel Birchield
Animal rights activists are increasingly vocal in their protests about New Zealand rodeos, saying the sport has had its day.

In return, rodeo officials are spending $25,000 on a campaign led by Otago Regional Council member and former MP Michael Laws to improve the image of the sport.

The New Zealand Rodeo Cowboys Association and animal rights activists are at odds about the future of the widely attended rodeos.

Mr Laws has publicly defended rodeos and says there is no illegal practice employed by the rodeo industry. The sport operates to a strict code.

The code has been gazetted and passed by the proper authorities, independent of rodeo. They are policy activists in Wellington, responsible for enacting animal welfare legislation.

The next local rodeo is set for Waikouaiti on March 3. On March 10 and 11, the national rodeo finals are to be held in Wanaka.

Wanaka may be an ideal target for the protesters because of the national significance of the event and the likely media coverage which can be gained by trying to disrupt an established event.

On the day of the Waikouaiti rodeo, the Otago Racing Club is holding its Champion’s Day. There is a growing concern about the overuse of whips in both thoroughbred and harness racing. The time may be close for a considered investigation into how jockeys and harness drivers encourage their horses to run faster. It is refreshing to see top horses win without the constant thrashing of a whip.

There is no middle ground with animal activists, who are often prepared to put their own lives at risk to stop events. New Zealand action groups believe rodeos have had their day, but recent numbers do not show it.

The thrills and spills of rodeos are being welcomed by people who are starting to resent the cotton-wool atmosphere in which they are often forced to live.

The internationally recognised sport of rodeo has been part of New Zealand’s culture for more than 50 years, he says.

Just because something has been operating for 50 years does not automatically give it licence to continue and it is up to the association to strictly enforce the code to which it adheres.

With the increasing use of technology, it is far easier for opponents of rodeo, racing, and many other sports, to film and edit events and show them in the worst possible light.

To counter this, the highest of standards must be kept. Queen guitarist Brian May launched a campaign in Britain to stop the hunting of foxes and badgers, gaining many enemies in the process. Mr May has set up a charity to try to halt the hunting of animals and has received threats for his efforts.

The cowboy association drew attention on its website to the harassment suffered on social media by some of its members. It alerted members to the need for them to lay a complaint with either the police or Netsafe if they are bullied online.

People have a right to protest. But also others have the right to participate in the sport and hobby of their choosing — without being bullied online. Rodeos will continue to be an emotive topic as the summer season continues. The Rodeo Code of Welfare was reviewed as recently as 2016 and there has been an increase in the number of training clinics available to novice competitors and riders.

Recognition of these measures should be acknowledged by animal rights activists, along with recognition by the association for the need to keep a close watch to prevent any incidents of cruelty.

Get a grip, people! Rodeo is condemned by EVERY major animal welfare organization due to its inherent cruelty. For nearly all the animals--horses and bulls included--rodeo is merely a detour en route to the slaughterhouse. Injuries and deaths in the arena are commonplace. Some "traditions" deserve to die. Rodeo is a macho exercise in DOMINATION, closely related to all the sexual harassment of women now dominating the media. It needs to go.

Most of rodeo is bogus from the git-go: REAL cowboys never routinely rode bulls, or wrestled steers, or practiced calf roping as a timed event (babies!). Nor did they put flanks straps on the animals, nor work them over with electric prods in the holding chutes. Some "sport"! Just imagine the public outcry were the rodeo cowboys to abuse pet dogs the way they do the roping calves. What's the difference, pray? So let's abuse and terrify them before we eat them, all in the name of "sport" and an unethical "entertainment," God forgive us. Even Pope Francis is a critic; Cesar Chavez, too.

BOYCOTT ALL RODEOS. Legislation is in order. As Tennessee Williams famously wrote, "Cruelty is the only unforgivable sin."

Eric Mills is not informed and has not been educated on the modern day rodeo in NZ. The electric prods are virtually extinct.
I’d like to see the data on all these injuries and deaths that are so common. This is the conspiracy theory that the animal rights groups keep saying. The rodeo association, SPCA, MPI, attending veterinarian and the thousands of rodeo fans spectating these events are all hiding these injuries and deaths that are so common place.
Eric should attend a rodeo and ask to see first hand the handling and care of these animals, equipment and rules so that he gets the knowledge to make an informed comment.
Rodeo animal welfare is a forward evolving policy and with new technology and advanced science we learn more about our animal athletes. This is why stock contractors are becoming the norm who specifically use the right genetics, training, health and nutrition and invest in their animals to be able to perform to the best of their ability. These contractors do not do this to then abuse these investments.
Rodeo is expanding around the world, European Rodeo Association being the latest to form.

It's not a sport. It's animal abuse and animal cruelty.

Let's move into this millennium, shall we?