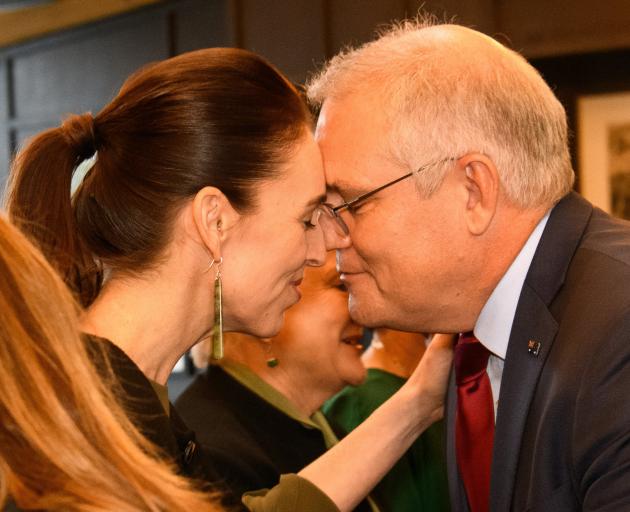 Any uranium on the breath yet, Mr Morrison? PHOTO: MARK TANTRUM
Nothing comes as much of a surprise these days.

Yet there is still capacity for the odd bolt from the blue. And that came this week, with the pronouncement of a new global security alliance between Australia, the United States and the United Kingdom, rolled out on Thursday with the uncatchy title of AUKUS.

The AUKUS door appears to have been firmly shut against New Zealand. While Prime Minister Jacinda Ardern says we actually opted out of the grouping, she made it clear the Government believes we remain an important part of the Five Eyes intelligence alliance.

Canada is the other country in Five Eyes which has also not made it into AUKUS.

It might initially feel worrying that we have been left out of this by some of our closest friends and allies. But when you take a few steps back and look again at this new grouping, and what it might be aiming to achieve, it may be no bad thing not to be involved.

For at its heart, at least in the initial stages, lies one of this country’s greatest anathemas — nuclear-powered vessels.

AUKUS involves the US and UK supplying Australia with the knowledge and technology to be able to build its own fleet of nuclear-powered submarines. That will make Australia just the seventh country in the world to have them, along with those two AUKUS partners, and China, India, Russia and France.

Former Labour prime ministers Norman Kirk and David Lange, and generations of peace and nuclear-free advocates, will be spinning in their graves at the thought of nuclear subs just across the Tasman Sea.

Of course for Australian Prime Minister Scott Morrison this is a huge moment, one that he and his ilk will see as confirmation of Australia’s importance on the world stage.

They will feel they have joined the ‘‘big boys’’ in the geopolitical playground. Even the mortifying moment when US President Joe Biden appeared to forget Mr Morrison’s name and referred to him as ‘‘that fellow from down under’’ will have been taken on the chin, just as any juniormost new member of the top group would have to laugh it off to save face.

But AUKUS goes further than just the adoption of nuclear technology by our closest ally and neighbour. It redraws the geopolitical map of the broader Pacific region and has already raised concerns, including from international affairs specialist Prof Robert Patman at the University of Otago. He says the new alliance may be viewed by some as an unwelcome intrusion by the West’s military powers and as a challenge to nuclear non-proliferation.

For New Zealand, it is upsetting to think of nuclear subs operating off our coastline.

The submarines will not be welcome here, of course, and rightly so.

One positive may be that, after having to put up with Australia deporting back here criminals who are barely Kiwis, we may finally be able to send something back in their direction.

Time for some deep breaths

Morrison told Australian media that the defence alliance had been “well-received” in his discussions so far with leaders in Japan, India, Singapore, New Zealand, Fiji and Papua New Guinea.

Why the big stink about nuclear power?
It might not be too long before we see nuclear powered merchant shipping
Shipping currently represents 3% of global CO2 emissions and it's projected to reach 17% by 2050 as other sectors decline
Unless fuel sources are developed capable of powering large ships over long distances, we may have little option but to accept nuclear power
There are many new designs being developed and trialed around the world, most of which have passive safety systems and there is no way solar and wind can provide a constant supply without other technologies supporting them
The big issue with this sub deal is the French loses a $50B contract and the
Chinese will have to try harder to find them
We all know that it is the Chinese / Australian relationship that has prompted the move and with the Aussie navy up against what is now the worlds largest navy, who can blame them
It's not as if the US can be seen as a reliable ally now days but they are always happy to supply arms, even to their enemies

Nuclear energy will never be mass produced so will never be cheap enough to work for commercial shipping. All the renewable options are, and so are only going to get cheaper, more efficient and energy dense for that reason.

Wow. That sounds like a very clear crystal ball you've got there
US Department of energy seems to think otherwise
https://www.energy.gov/ne/articles/what-nuclear-microreactor
Westinghouse are putting there money where their mouth is
https://www.westinghousenuclear.com/new-plants/evinci-micro-reactor
Thorcon are working with Indonesia
https://thorconpower.com/
NZ rightly got upset about the French nuclear bomb tests in the Pacific
Sinking the Rainbow Worrior in Auckland harbour 35 years ago didn't help neither
That doesn't mean we should turn our back on what is being developed around us, if we are truly serious about climate change
Fear and a single track mind, do not lead to good decision making
We need to be aware and talk about all possibilities when discussing energy