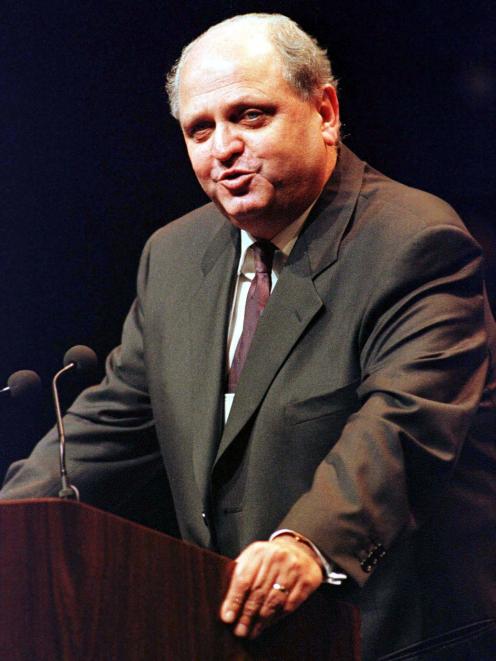 Former prime minister Mike Moore, who died last week. Photo: Files
Many New Zealanders may remember Mike Moore with affection, even if they struggle to recall much about his eight weeks as New Zealand’s Prime Minister.

Mr Moore himself had no chance to relish the top job either, as he spent the time campaigning for the 1990 election.

As he said, he knew the Labour Party could not win the election, but his job was to save the furniture or enough of it to enable the party to return to power in six or nine years.

He found humour in it, saying he had succeeded in uniting the country — queues formed hours before the polling booths opened on election day as they voted to give me some time off. But that’s democracy: the people are always right even when they’re wrong.

Mr Moore had taken over from Geoffrey Palmer following poor poll showings. His situation was similar to that faced by Jacinda Ardern seven weeks before the 2017 election, although, of course, she took over the party leadership in Opposition.

He lost the election but stayed on as leader to fight the next one, losing narrowly to National, led by Jim Bolger, and he was shortly replaced by Helen Clark.

There will be mixed views about his political legacy and his position as one of the leading lights of Rogernomics in the 1980s. Mr Moore, while he may have felt too many state assets were sold, and some changes had been made too quickly, did not later resile from the changes made.

He was a man who was always brimming with ideas, even if sometimes they were hard to understand. The late Labour prime minister David Lange once said his mind worked as if it had been wired by a Ukrainian electrician.

Who could forget his promotion of the lamb burger? Some poked fun at him over that — prime minister Sir Robert Muldoon among them — but what he was pushing was the need for New Zealand exporters to add value to primary produce rather than just sell the whole animal or whatever the product might be. Many have echoed that sentiment in the years since.

He was always proud of his working-class background. His father died when he was 5, he left school at 14 to work in the freezing works and by 23 he was a member of parliament.

In an interview with RNZ in 2017 he joked that he should have been made prime minister then because he knew every bloody thing.

Although he had no tertiary education, he read voraciously and went on to write several books outlining his views.

After his time in Parliament, he served as director-general of the World Trade Organisation from 1999 to 2002. A cheerleader for globalisation, he argued that rules-based free trade offered the best hope for lifting the world’s poorest people out of poverty.

He also did a stint as New Zealand’s ambassador to the United States.

His view of what people aspire to was an adaptation of Labour prime minister Norman Kirk’s famous saying. Mr Moore said that as well as wanting someone to love, somewhere to live, somewhere to work and something to hope for, people also needed something to lose. When people owned nothing, that could lead to violence.

Mr Moore’s funeral will be held at his old school, Dilworth, in Epsom next Friday afternoon.