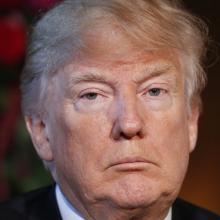 Donald Trump
By later today,  or early tomorrow, it will be known the extent to which Europe, Canada and Mexico will go to counter the United States’ tariffs.

Canada and Mexico have made early moves but there are suggestions more barriers will be put in place for US exports.

US President Donald Trump unilaterally imposed sweeping tariffs on  steel and aluminium imports from the European Union, and its Nafta trading partners Canada and Mexico.

European commissioner Jean-Claude Juncker is promising to have retaliatory measures in place. In a furious address to a conference, Mr Juncker was threatening like for like, enough to make free-trade countries like New Zealand shudder.

The move is likely to have an immediate impact on global trade in steel and aluminium, particularly between the US and Canada, the largest supplier of imported steel to the US.

A meeting of the Group of Seven, in Canada, was taken by surprise by the announcement. Concern about Mr Trump’s hardening approach to trade dominated the discussion panel as top policy makers from the United States, Britain, Germany, France, Italy, Japan and Canada gathered in the alpine village of Whistler, British Columbia, Canada.

Although trade is not the direct responsibility of the representatives, they quickly turned their attention to possible repercussions.

There is growing concern trade wars may turn into real wars — particularly with the ongoing tit-for-tat squabble between China and the US.

On Tuesday, the White House pledged to slap an additional 25% tariff on a long list of Chinese products, including metals. Within hours Beijing retaliated with the promise to lift levies on $US50 billion worth of US imports by 25%. The Chinese list includes soybeans, automobiles, chemicals and aircraft. In response, Mr Trump threatened an additional $US100 billion in tariffs against China.

Global supply chains are at risk from the actions being initiated by Mr Trump and, because of his powerful position and erratic behaviour, no-one knows for sure how this will play out.

Mr Trump has backtracked on previous policy announcements, especially concerning a meeting with North Korea. This time, he appears serious about protecting the interests of US steelmakers — something he promised to do during his election campaign. American steel producers cheered Mr Trump’s actions but companies using imported metals say it endangers US jobs and investment.

Mr Trump’s habit of opening negotiations by making tough opening statements, only to back off quickly when concessions start going his way, may backfire with the EU. Europe is not likely to make easy concessions to make Mr Trump happy. The very opposite may be the case. European officials are increasingly frustrated by Mr Trump’s aggressive use of obscure provisions in US trade laws against US allies.

New Zealand has signed the expanded version of the Trans Pacific Partnership trade agreement, and has been given early approval to negotiate a trade deal with the EU. But still, negotiators will be wary of the fallout from the latest trade furore.

The Mexican Government says it will levy import taxes on US exports of pork bellies, apples, fruits and various types of steel. Canada has levied a surtax on $US16.6 billion of American steel, aluminum and other products, as Prime Minister Justin Trudeau pronounced Mr Trump’s claim to be protecting national security an affront to Canadians who fought alongside American soldiers from World War 2 to Afghanistan.

Mr Trump’s posturing is damaging to not only global trade. He is facing a backlash from some of his Republican allies, who are now worrying about surviving midterm elections.

The bigger fear over the current conflict is how escalating retaliatory tariffs may undermine institutions such as the World Trade Organisation, which have underpinned the world trading system since the aftermath of World War 2 and have prevented the outbreak of major trade wars.

The world will be watching for the next moves as the EU plans its retaliation to Mr Trump, hoping his aim of protecting his domestic metals industry does not escalate past the point of no return.