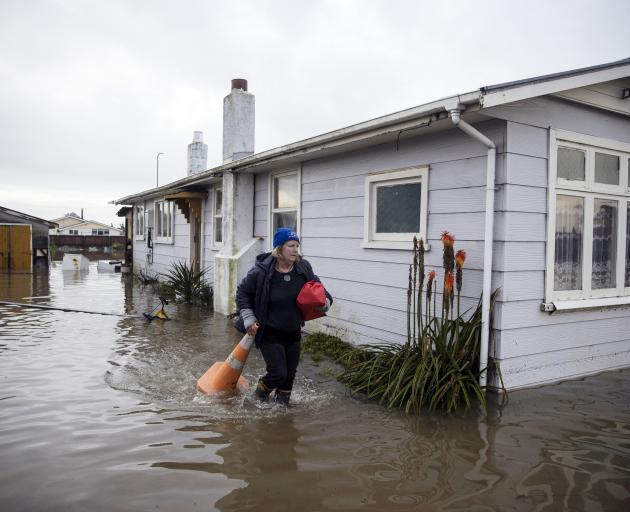 A Westport resident leaves her home after the weekend’s flooding. PHOTO: THE NEW ZEALAND HERALD
If New Zealand was an “irredeemably pluvial country” a bit over 30 years ago in former prime minister Sir Geoffrey Palmer’s mind, what might he call it now?

Of all the elements of nature that affect us, flooding poses the biggest and most frequent risk to life and livelihood, even in a country prone to other forms of extreme weather and to earthquakes and volcanic eruptions.

Sir Geoffrey’s quip gets trotted out relatively often these days and for good reason. New Zealand has the potential to be wet — very wet indeed — and appears to be getting even more so in some places. That is due to the influence of the warming climate and the laws of physics, which say a hotter atmosphere is able to hold more moisture.

Less than two months ago it was Mid and South Canterbury in the firing line of an easterly rainstorm which brought devastating flooding estimated to be about a once-in-100-year event.

This time it has been the top of the South Island, particularly the Buller district around Westport and parts of Marlborough, which has suffered after barely imaginable amounts of rain fell in the back country and turned rivers into thunderous torrents.

In Westport, water from the mighty Buller River on one side and the swampy Orowaiti River on the other rapidly encroached on low-lying homes and sandwiched the town in the middle, with about half its residents forced to evacuate. The bridges across both rivers were closed on Saturday, cutting off Westport from the north and south.

Half a metre or more of rain in the ranges behind Westport fed the Buller which, not a river to be toyed with at the best of times, swelled to heights not previously seen, swamped the highway at Hawks Crag and could be heard roaring from several kilometres away.

Hundreds of residents cannot return to their damaged homes because of the flooding, which locals believe was the worst in almost 100 years and the biggest disaster to affect Westport since the 1968 Inangahua earthquake.

Many Marlborough folk are also in recovery mode after the Wairau River burst its banks and forced evacuations over the weekend in an area where major flooding is less frequent.

One heavy rainstorm is not necessarily evidence of climate change at work, unless there is some unusual aspect to it, such as its duration or intensity. But two such events in as many months, leading to such devastating flooding, leave little doubt that our weather patterns are changing.

The question is, what can be done about it? Many rivers around the country have been partially “tamed” by local and regional flood protection schemes worth hundreds of millions of dollars. Floodbanks and diversion channels can certainly help, but they have been paid for by regional ratepayers when in fact the assets they are protecting — lives, homes, businesses — are also nationally important.

It is time the Government started paying some of these costs, given it has been estimated that the replacement value of all river management and protection schemes is about $2.3 billion. Expecting local communities to shoulder that burden is not fair at all, especially as more frequent, severe weather is on the cards.

But there is also a fear that floodbanks can give communities a false sense of security. Big enough floods can easily breach such defences.

Policymakers and government ministers also need to be looking beyond the next few years, to ensure no more homes or subdivisions are built in risky locations, be it alongside rivers or along the coast.

There is also the painful matter of planned retreat from the most hazard-prone places to be considered.

In the meantime, we have to rely on existing protection and on the continued accuracy of MetService’s extreme-weather warnings. Without such excellent forecasts, the effects of the flooding at the weekend and the end of May could have been far worse.

Prioritise public spending.
The America's Cup is not a goer.