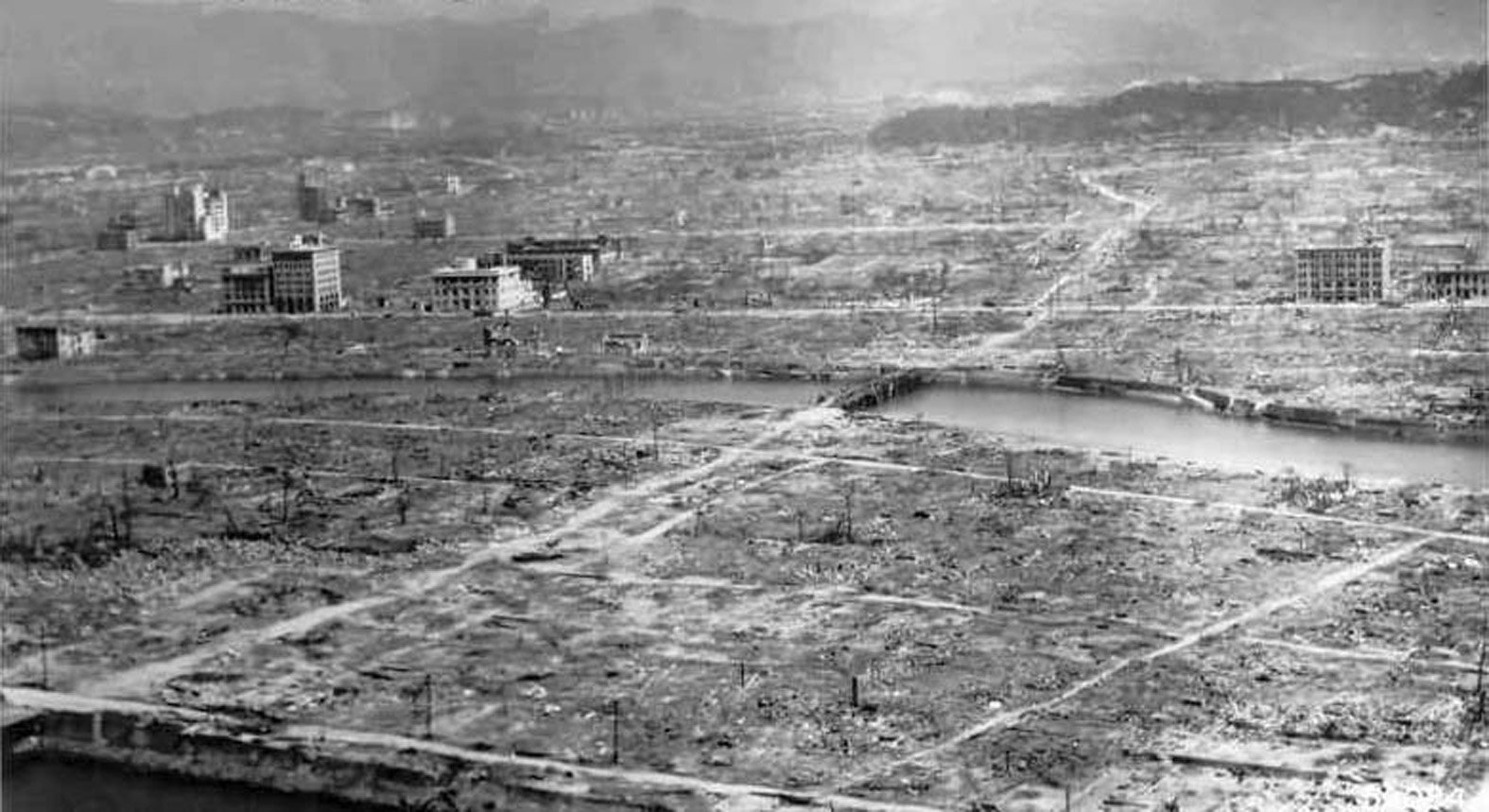 Hiroshima, shortly after bombing on August 6, 1945. PHOTO: US ARMY AIR FORCE
Hiroshima Day is an opportunity to remember that nuclear wars can never be won, writes  Kevin P. Clements.

August 6, 2022, is the 77th anniversary of the atomic bombing of Hiroshima.

Irrespective of whether you think nuclear weapons were critical to shortening the war, or a cruel experiment on innocent civilians, the humanitarian consequences of both the Hiroshima and Nagasaki bombs were horrendous and totally unjustifiable.

Neither target was of any military significance and the primary victims were civilians struggling to survive, at the tail end of a totally  misguided war.

Hiroshima Day, therefore, is an opportunity to remember all those who were the victims of the first use of nuclear weapons in warfare. It is also a day in which we must reiterate the Reagan-Gorbachev agreement "that nuclear wars can never be won and must never be fought".

In the face of a global pandemic, climate change and the war in Ukraine, it’s relatively easy to forget the ongoing threat posed by nuclear weapons to the very survival of the species. President Putin, however, reactivated widespread anti-nuclear concern by his recent threat to deploy and use nuclear weapons in the Ukraine. These threats broke the so-called "nuclear taboo", which asserts that nuclear weapons are intended to deter aggression but not to be used or threatened to be used in acts of aggression because of the devastating consequences that would follow.

The result of these recent threats is that formerly neutral countries, such as Sweden and Finland, have requested membership of Nato and are willing to take cover under Nato’s nuclear umbrella. Closer to home, Putin’s comments are forcing countries such as South Korea, Japan and Taiwan to consider the reliability of extended deterrence agreements and whether they should provide basing facilities for US nuclear weapons or develop their own nuclear arsenals. When these discussions are coupled with the systematic dismantling of old arms-control agreements such as the Anti Ballistic Missile Treaty,  Open Skies Treaty and the Intermediate Range Nuclear Forces Treaty (INF) it looks as though the prospects for nuclear disarmament are very bleak indeed. This bleakness is not helped by three of the five recognised nuclear powers modernising, miniaturising and expanding their nuclear arsenals.

All of these factors are going to play very negatively at the Non Proliferation Treaty Review Conference being held in New York over the course of this month. The nuclear powers at the NPT have to demonstrate progress towards nuclear disarmament. If they cannot, and the prospects currently look bleak, there is a possibility that the NPT Review will not be able to reach a consensus final document and non-nuclear states will contemplate whether the NPT is fit for purpose.

Fortunately, there is a vital complement and an alternative to the NPT, namely the Treaty for the Prohibition of all Nuclear Weapons. The TPNW is aimed at delegitimising and prohibiting all nuclear weapons. I was privileged to be able to lead the Toda Peace Institute delegation to a conference on the Humanitarian Consequences of Nuclear War and the First States Parties Meeting of the TPNW  in June in Vienna. The TPNW is the only agreement at the moment which is inspiring civil society and state actors to eradicate all  nuclear weapons. The Austrian government organised both meetings under the careful leadership of ambassador Alexander Kmennt.

The first meeting on the humanitarian consequences of nuclear war introduced up-to- date information on the effects of small and  large-scale nuclear exchanges, on nuclear winter, global radiation levels, deaths and illness and the impossibility of providing health services to all those likely to be affected by nuclear weapons. This built on earlier conferences, which laid the humanitarian and ethical basis for the treaty.

The States Parties Meeting reviewing progress on the TPNW did a number of things. It promulgated the Vienna Declaration, which opposed all nuclear threats on humanitarian grounds and developed an implementation plan aimed at "stigmatising and delegitimising nuclear weapons ... and building a robust global peremptory norm against them".

The action plan focused on ways of universalising the treaty and conducting diplomatic outreach to countries that hadn’t joined yet. It developed concrete actions for the elimination of nuclear weapons and for their verification. It agreed to provide victim assistance and remediation to countries that had suffered from nuclear use or testing and advanced hard-headed verification processes for those nuclear or umbrella states that join the treaty.

It developed a number of informal intercessional working groups to advance universalisation, victim assistance and environmental remediation. The one co-chaired by Mexico and New Zealand is aimed at developing competent international authorities with negotiation and verification mandates to promote verifiable nuclear disarmament measures. These will be developed with scientific and technical support mechanisms and designated national contacts. It will work in conjunction with the NPT and other disarmament mechanisms.

More could be said about the conference. What is clear is thatthis is the first treaty aimed at nuclear abolition. The Declaration and Action Plan are serious and the States Parties are committing resources, expertise and realism to make sure that it succeeds. New Zealand is playing an active role in ensuring that it is a success. It is a hopeful project for a world in turmoil. Let’s be positive on Hiroshima Day.

Kevin P. Clements is director of the The Toda Peace Institute.