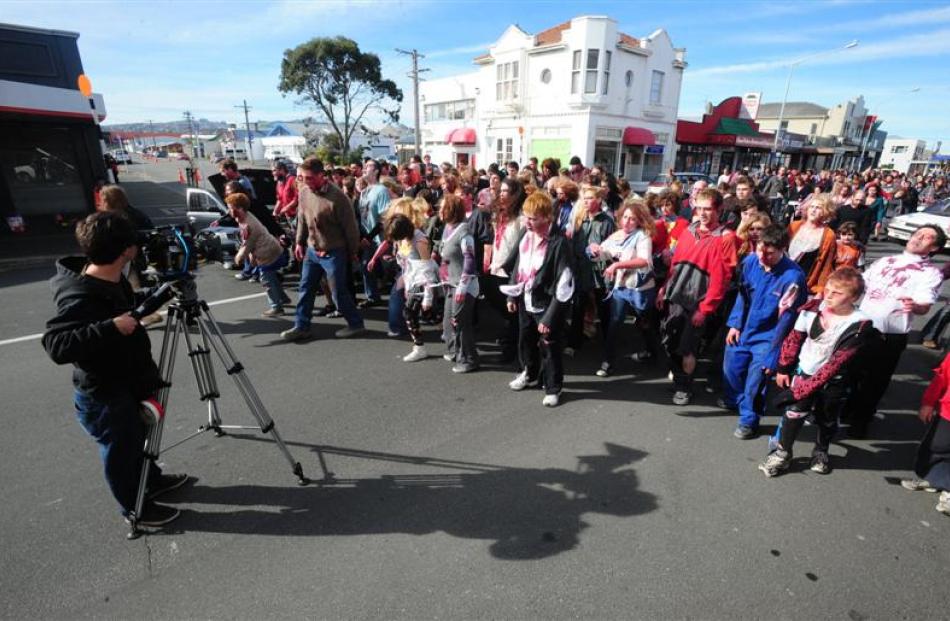 What will be the effect of Dunedin City Council film location fees on small-budget films like 'Zombie', here being shot at Easter, in South Dunedin? Photo by Craig Baxter.

Well, well, well, the DCC has done it again! Another ill-considered policy that has the potential to limit growth.

The Dunedin City Council has circulated a draft film location fee policy. They have asked for comments regarding the introduction of the policy, which is code for it's a done deal unless you scream.

It appears to me the council operates at two extremes. Both are immensely damaging to the city and both have significant consequences for all of us, burdened as we are with ever-increasing rates.

On one hand, we have a council which can't say no, continuing to commit to extraordinary levels of capital expenditure on colossal projects. This council seems driven by a lethal cocktail of inflated egos and fiscal naivety, with the potential to bankrupt the city.

On the other hand, we have a group within city hall who appear driven by small-mindedness in their quest for schemes which seem to alienate as many residents as possible. Recent examples include the parking fiasco in the CBD, increased rates for people operating B&Bs, increased building consent fees, increases to parking costs and the threat to the harbour-side engineering cluster. I won't mention the John Wilson Ocean Dr shambles.

Back to the film location fees.

The council claims these fees will bring Dunedin into line with other film offices in New Zealand, in particular Queenstown. This is hardly a strategic comparison. Unlike Dunedin, Queenstown, as a location, has been home to a significant number of international feature films and hundreds of commercials. Its location draws large budget films like a magnet.

The colossal budgets for large feature productions, similar to the size Queenstown attracts, which are very occasionally filmed here, would be unaffected by these fees. The company I run (NHNZ) would simply choose to film elsewhere.

The only filmmakers who will be affected are the small teams, on low budgets, attempting to establish themselves in this city as part of an increasingly valuable Dunedin industry.

These are talented and tenacious young people who struggle, without the levels of support enjoyed by their northern counterparts, to make films that have begun to be recognised internationally.

They deserve support and encouragement, not punitive road blocks.

These filmmakers also offer potential value by exposing Dunedin to national and international audiences. I suspect these values have not been considered.

This is another case of bureaucracy developing road blocks to growing a potentially valuable, specialised, wealth-generating industry. At the very least, the council should have begun a dialogue with affected parties before presenting an ill-considered policy that will only serve, yet again, to alienate another sector in our city.

With a city in crisis regarding loss of industries, the last thing we need is small-minded policy-making from an increasingly punitive council. Such policies have the potential to erode what remains even further.

Finally, media in all its various forms has grown over the past 10 years to become a significant industry in this city.

The council has absolutely no idea what the film industry is worth to the city, nor is it engaged with the wider industry in order to find out. Perhaps replacing ill-considered policies with dialogue may just help that badly needed growth.

• Michael Stedman is the managing-director of NHNZ.