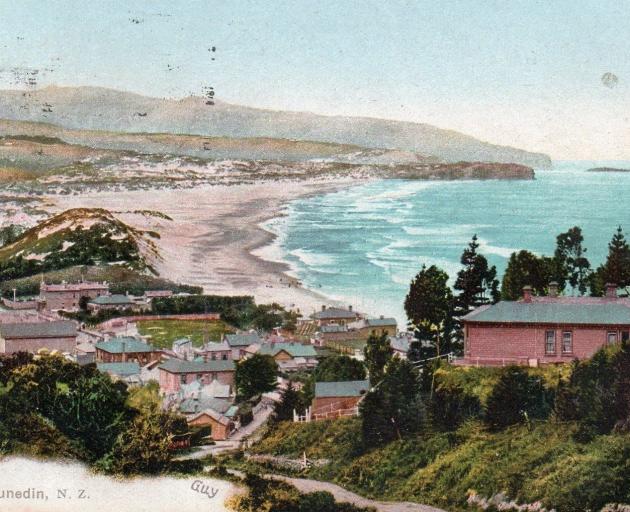 Living near the beach with a dog as I do, means regular scrutiny of the ever-changing sands. Unfortunately, the overwhelming observation of recent years is the massive quantity of sand that has been eroded from the St Clair coastline.

The sea has eaten into the sand dunes to such an extent that the landfill under Kettle Park is exposed further and further each winter with unsightly items such as old car parts now appearing after storms.

Being an Otago science graduate, I have an inquiring mind and with a lifelong mechanical interest, I like to understand how things work, so I investigated the history of the beach.

One of the earliest photographs of St Clair is a postcard image from 1885 showing high dunes, the sea coming much further west and sand all the way to Victoria Rd. Kettle Park, Tahuna and Chisholm are broad expanses of sand.

An image from 1969 shows grass covering those areas and a great width of beach in front of the dunes. It is faintly possible to see the St Clair Poles just poking out of the sand.

Clearly visible in an image from 1989 is the Moana Rua Surf Club. It is the red and white building in the centre of the picture. It no longer exists, neither does the sand beneath it, nor the walking track that used to run along the top of the dunes

Note how broad the beach is exactly where the St Clair poles are located. The poles protrude a bit further than in 1969 but the beach is still about 3m deeper than now. 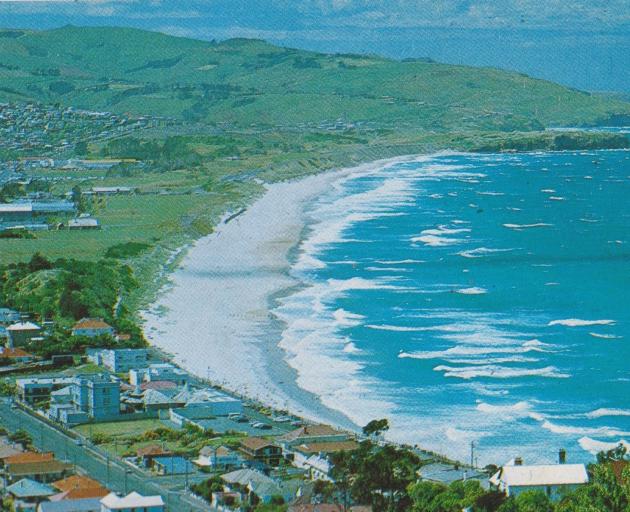 Grass covers an area in front of the dunes in 1969. PHOTO: SUPPLIED
If you visit Moana Rua Rd today, be careful, the sand cliff is steep! You might visualise the roundabout that used to be located beyond the gates that now prevent your view of the water and protect you from falling into the sea to join the asphalt that used to be there.

Our famous St Clair poles are actually a sand-trap known as a groyne and they are the main reason the beach became so wide and their deterioration is why we now have so much erosion.

St Clair coastal erosion problems began 140 years ago as soon as the first seawall was constructed at the esplanade about 1880. The wall reflected the waves which then scoured away sand so that ever larger waves hit the wall with inevitable results. Four walls were destroyed before it was realised that beaches are nature’s way of absorbing wave energy, so if you want to look at the sea from the top of a nice flat promenade, grow the beach in front of it and the wall will last.

City Engineer, J. Blair Mason, realised that beaches are built up all around the world using groynes — in our case, made of poles and planks. They form a wall that runs straight out into the surf which traps moving sand. In 1902 he built our first groynes. The sand accumulated, the beach built up and the esplanade was saved.

In 1921, District Engineer F. Furkert was annoyed to find those groynes badly maintained and he organised fresh ones to be installed. 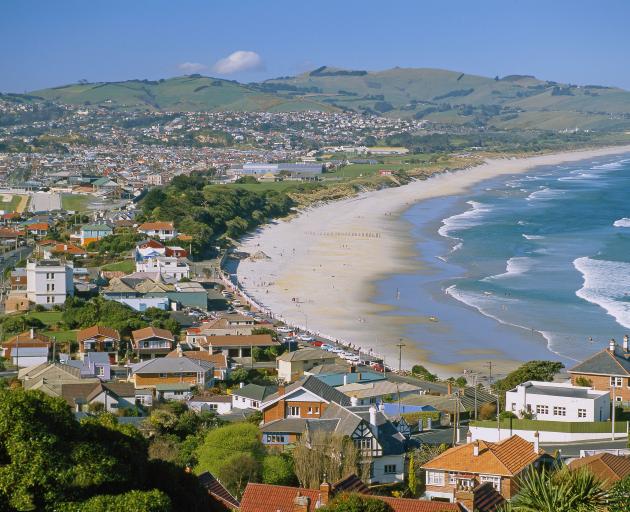 The red and white Moana Rua Surf Club is visible in 1989. PHOTO: COLIN MONTEATH
Similarly, distinguished Ministry of Works Chief Engineer, C.W.O. Turner reported to the Government in 1955: ‘‘Reconstruction of the planking on the two groynes immediately north of the Esplanade is in progress and should suffice to check erosion at this point and build up the beach.’’

Thereafter, St Clair enjoyed another 50 years of deep sand and a wide beach, thanks to a few simple poles with strong boards between them, which quickly became buried by the sand they accumulated. Cast your eyes back to the photos from 1969 and ’89 to check again.

Unfortunately, our memories are short and the purpose of the poles was quickly forgotten. Since the turn of the millennium, the groynes have again deteriorated and we are once more in a state of anxiety about St Clair. The beach today clearly shows how much sand has been lost. Summer conditions bring it back each year and all we have to do is hold it in place and allow it to mount up.

The solution is pretty obvious and easily achieved since repair of an existing coastal structure does not require a resource consent. Let’s just repair the remaining groyne forthwith and measure the results. One groyne is not the whole answer but it is an inexpensive, proven mechanism that will buy us time by trapping a pile of sand on the beach to protect the dunes in winter.

1. St Clair is in the fortunate position of having plenty of sand moving north from the Clutha and Taieri rivers even with the advent of the Clutha dams, so trapping a little extra at St Clair is no detriment to places further north. The sand that does get past the peninsula mostly settles in Blueskin Bay and we can see how Warrington Beach has grown.

2. Because we have both northeasterly and southeasterly conditions, sand accretes on both sides of groynes evenly at St Clair, unlike many northern hemisphere beaches.

3. In winter, southerly storms strip the sand off St Clair, but if we have accumulated a bigger beach with groynes, there is a sacrificial volume of sand and the dunes are protected. 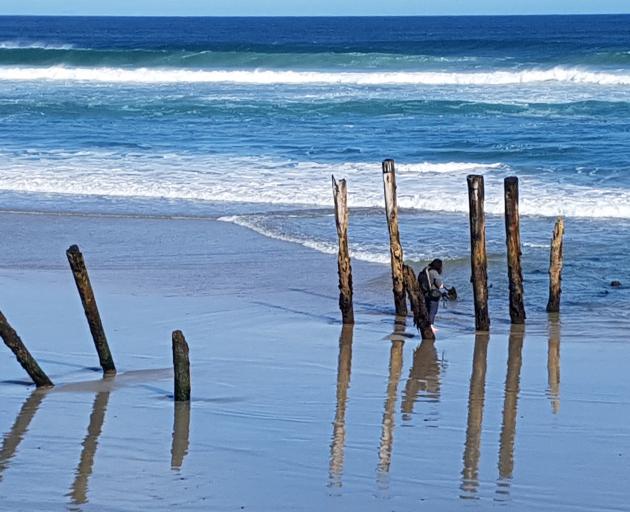 The St Clair poles in 2019 showing how much sand has been lost. PHOTO: JULES RADICH
Scoured sand sits closely offshore and is quickly returned to the beach when conditions change.

I loved those old poles. When they looked like the remains of a jetty, they attracted even more artistic attention than Dunedin’s famous railway station.

The wistful reminder of bygone days and the perfect framing of White Island bestowed iconic status.

We loved their look but we forgot their purpose. Three metres more sand on the beach gave us more than a bigger playground and a pretty picture, it gave us protection and security.

Very good article CrRadich, an interesting and informative read. I do still feel that those dunes need some extra protection. Based on the current thinking and research that we will indeed see bigger storms and sea level rise, a more robust solution is probably required. The groynes may indeed have been the answer in the past, however, if indeed we're looking at a very different weather situation for the future, we're going to need serious armour to protect residents and the old landfill. I have mentioned this a few times, as they are VERY effective. Wellington Airport and the New Plymouth breakwater being excellent New Zealand examples in tremendous sea conditions. Armour in the form of AKMONS. We may indeed need a combination of the two. Groynes along the beach, Akmons securing the dunes as a main defence. Groynes to control the sand drifts, Akmons to diffuse the tidy surges and waves, preventing the sea getting anywhere near eroding the dunes. We can't afford to risk gambling solely on a past solution (that works well) when the conditions of the game have significantly changed. Sand filled geo bags are just a waste of money.
None the less, your article was very informative.

Well said Buzz, Maybe they should consider a sand pumping ship to be contracted to suck up the sand out at sea, then pump it ashore where diggers move it around the beach once AKMONS are in place and before any the new Groynes are installed along the beach. Something needs to be done along that beach. and expect it might be a multi solution approach. That Land fill rings alarm bells for me.

One wonders why we are endlessly debating this?, just get in and do it.