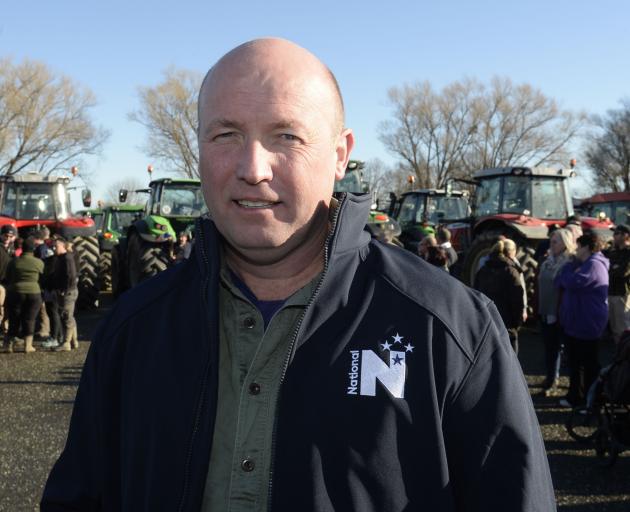 National agriculture spokesman David Bennett at the Gore Groundswell protest. PHOTOS: GERARD O'BRIEN
For something set up as an apolitical organisation, farmer advocacy group Groundswell is having a heck of a political impact.

Yesterday the group, set up by Greenvale farmer Laurie Paterson and his Pomahaka colleague Bryce McKenzie in October last year, held its first national event, Howl of a Protest.

Farmers and sympathetic townies both were encouraged to fetch up to a town centre near them to show how fed up they were with increasing Government interference in their lives and businesses.

So, does the Government care that much?

Probably not, but it probably should. 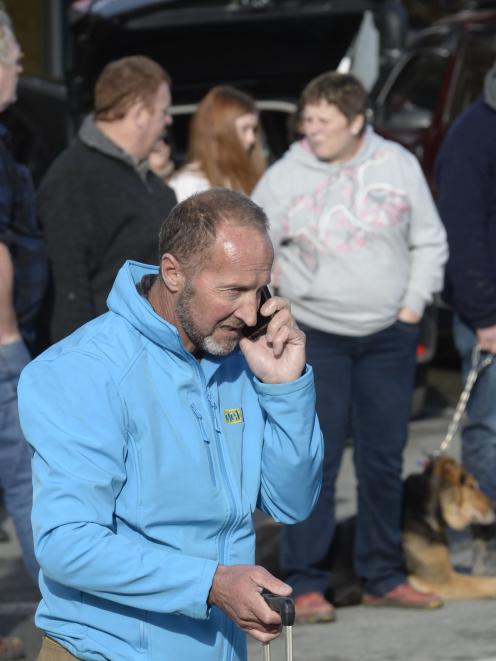 What did feature though is exactly what the party is rolling out now: a focus on climate change, preservation of the natural environment and reinforcement of the goal of carbon neutrality.

As Labour tackles these issues, it has subcontracted some of the heavy lifting to the Green Party, its co-leader James Shaw being maintained in the climate change role he held in the previous government.

It is fair to say the Greens and farmers have seldom seen eye to eye, but Mr Shaw probably did more for Groundswell than any one person with his casual and poorly considered dismissal of the group as ‘‘a group of Pakeha farmers from down south who have always pushed back against the idea that they should observe any kind of regulation about what they can do to protect the environmental conditions on their land’’.

Labour Party strategists, let alone Green strategists, would not be expecting many votes from the rural sector in 2023.

However, that comment just about sealed that deal all by itself and ensured that Groundswell — which had already held some well-attended meetings outside its southern fastness — gained further momentum.

National was fast out of the blocks to align itself with Groundswell, the party’s Southland MP Joseph Mooney being quick to issue an invitation for Mr Shaw to come to his electorate and meet the organisation’s leaders.

Act New Zealand was just as rapid, agriculture spokesman and Northland farmer Mark Cameron enthusiastically hoisting his party’s flag alongside that of Groundswell.

All the Act caucus were at Groundswell events yesterday, Mr Cameron attending the Gore rally alongside Nicole McKee.

All National’s MPs were also at various protests, as both parties strive to paint a picture of themselves as the defenders of the downtrodden rural voter.

This is a harder task for Act, as leader David Seymour knows.

His oft-repeated crack about being a latte guy from Remuera is a well-calculated icebreaker at rural gatherings, gaining him a sympathetic ear.

It worked last year, as Act dramatically boosted its regional vote, support it wants to expand on rather than surrender back to its traditional home, National.

For National, a party which desperately needs to reconnect with its base, Groundswell offers a tremendous opportunity should it be nimble enough to snag it.

Should all of this worry Labour?

Groundswell’s membership is not its constituency and is never likely to be, but the party would be wise not to ignore these rumblings of discontent.

The mood of unity engendered by the ‘‘team of fivemillion’’ was never going to endure, but phenomena like Groundswell chip away at the carefully nurtured popularity of the prime minister, and given there are two years before the next election that offers ample time for Labour’s regional party vote to be eroded.

In 2004, Labour dismissed then National leader Don Brash’s Orewa speech, but the profile it afforded him at the time helped him come very close to defeating Helen Clark in the general election the following year.

Groundswell is a very different thing, but it seems to have as much potential to be a game-changer.

Labour cannot afford to be as flippant as Mr Shaw about a group of farmers from down south.

Out of this world

A promotion for Southland National MP Joseph Mooney, who is now his party’s associate spokesman for space.

While this might seem a role unlikely to overly tax Mr Mooney, he is quick to point out that New Zealand’s space sector is almost the same size as the country’s wine sector — not that there is an associate wine spokesman, but given some of the country’s best pinot noir is grown in his electorate Mr Mooney should definitely put his hand up for that.

Also, it probably does not do his career prospects any harm that Judith Collins happens to be National’s space spokeswoman. 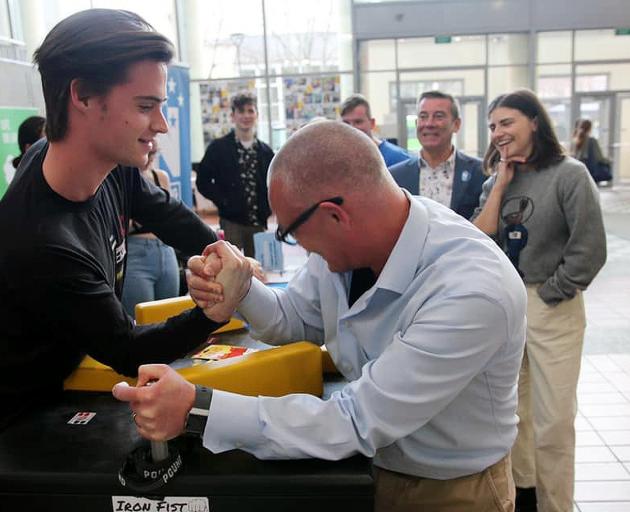 Labour MP David Clark takes part in an arm-wrestling competition with an unknown student in the University of Otago Link building. National MP Michael Woodhouse and the Greens’ Chloe Swarbrick watch with amusement. PHOTO: FACEBOOK
Through a glorious fluke, at the University of Otago ReOrientation Clubs day on Thursday the political party young wing stands were right next to the arm wrestling club.

Dunedin MPs Michael Woodhouse and David Clark gamely gave it a go ... while the photo suggests Dr Clark had the upper hand, he confessed on social media that his efforts had been in vain.

Always interesting to read Mr Houlahan's opinions but he always seems to overlook ideas and opinions that do not match his own.
Calling Groundswell an apolitical group is almost funny. As Mr Houlahan points out their membership never will be Labour voters. They would not exist if National were the Govt and, mark these words, will fade away if National are elected next election. You can guarantee that National will not repeal any of the legislation Groundswell are protesting, they know very well that the legislation is needed if we are to protect our international trade.
Even if those farmers who abandoned National come back to them next election the impact will be mainly on ACT who will lose all of their list MPs, I doubt it will change any of the parliamentary seats in the south, which are National already.
No, Groundswell has been set up solely to try and diminish the Govts massive popularity, However viewing comments about the protests it seems to me that the majority are anti Groundswell and that reflects the view of the community at large. The public are sick and tired of cry baby farmers who refuse to take responsibility for the damage they caused to our rivers.

Just like IRD always seems to overlook ideas and opinions that do not match his own eh... oh and as for the "Govts massive popularity", the next election will be very telling...

At last nevaman and I agree in something the next election will be very telling.
My pick, and you can write this down now, is that ACT support will collapse as all those disillusioned National voters who hate Ardern more than they do crusher, turn back to National. ACT will lose all of it's list MP's.
I don't think NZFirst and Winston will be making a comeback, especially if they keep Shane Jones as the heir apparent, so their votes which seem mostly to have gone to ACT as well, will split with some going to National and some going to whatever weirdo, nutjob parties who put themselves forward.
The Greens will stay fairly static.
Labour will lose some support, Govts always do, drop to about maybe about 47% of the vote and the result will be a Labour/Greem coalition Govt with Ardern serving her 3rd term.
crusher will win enough of the lost national support back to assure her another 3 years as leader of the opposition,
The only thing that will change this, in my opinion, is an uncontrolled outbreak of Covid 19 in the community.
also go to nationalThe Govt will be returned with a recuced mias a minority

IRD must only read political pamphlets from Labpour if he thinks the community at large isn't starting to see through the smoke and mirrors around Taxindas policy roll outs. As these crazy ideas start to hit pockets (and they are already doing so) we will see the shine start to come off her halo. Even the press are starting to see through the spin. It says something when Chris Trotter roundly criticises Labour policy. So, Mr Houlahan, keep up the good work of accurately portraying what is really happening.

My nom de plume is lrd, all lower case letters, the first letter is an "ell"