A lesser Kurdish dream may be possible 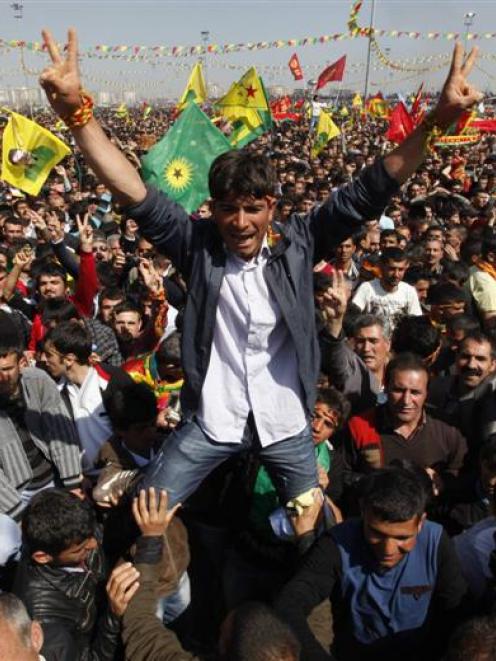 Demonstrators gesture and hold Kurdish flags during a gathering in the southeastern Turkish city of Diyarbakir last Thursday. Photo by Reuters.
''We are at a point today when the guns will fall silent and ideas will speak,'' declared Abdullah Ocalan, leader of the Kurdish insurgency in Turkey, on March 21.

''Turks and Kurds fought together [in World War 1], and launched the Turkish Parliament together in 1922. The basis of the new struggle consists of ideas, ideology and democratic politics.''

And with that, he declared a cease-fire.

Mr Ocalan has declared ceasefires before, but the Turkish Government made no substantial concessions on Kurdish rights so the fighting resumed. Nor is ''democratic politics'' a phrase you would readily link to Abdullah Ocalan, who tolerates no dissent in the Kurdistan Workers' Party (PKK), the organisation he created 30 years ago to fight for independence from Turkey. But this time really may be different.

After three decades of low-level guerrilla war in southeastern Turkey (about a thousand deaths a year), both sides have concluded that they cannot win: the Kurds cannot win their independence, and Turkey cannot crush the armed Kurdish resistance to its repressive rule. So, Mr Ocalan has stopped demanding independence and now talks about local self-government, Kurdish language rights, and an end to repression.

The other thing that's different this time is that Mr Ocalan has actually been talking to Turkey's Prime Minister, Recep Tayyib Erdogan, since last October. Not face-to-face, of course, but Mr Ocalan has been held prisoner on Imrali Island, about two hours' drive south of Istanbul, since Turkish agents captured him in Kenya in 1999, so it has been easy for Mr Erdogan's intelligence chief, Hakan Fidan, to go back and forth between the two men.

There is every reason to believe, therefore, that Mr Ocalan's ceasefire declaration, though apparently unilateral, was really co-ordinated between the two leaders. In which case the next steps that Mr Ocalan promised - the release of prisoners by both sides and the withdrawal of the 3000 PKK fighters in southeastern Turkey into the adjacent parts of northern Iraq were presumably agreed in advance, too.

This is not a process that will eventually lead to the emergence of an independent Kurdish state. That goal, promised to the Kurds by the victors at the end of World War 1, has been the dream of four generations of Kurds, but it is no closer than ever.

To bring all 30 million Kurds into a single, independent state would mean redrawing the borders of four major nations - Turkey, Iran, Iraq and Syria - and that is not going to happen. But Kurds already have full self-government (including a powerful army) in northern Iraq, and the Syrian Kurds have effectively thrown off Damascus' rule in the east of that country, so a lesser Kurdish dream now seems almost within the realm of the possible.

That would be a large area, still divided by national borders but with free movement across them, where the Kurds of the whole region could live, work and teach their children in their own language. More than half that area would be in southeastern Turkey, so the deal that Mr Ocalan and Mr Erdogan may make, if things work out, is vital to this project.

Mr Erdogan is trying to get a new constitution through Parliament. He has two major aims: to prevent future military coups, and to remove the anti-religious elements in the document that have restricted any political expression of Islam since the founding of the republic 90 years ago. He also wants to strengthen the presidency, now a largely ceremonial office, since he plans to run for president next year.

Mr Ocalan has no objections to any of that. All he wants in a new constitution is full equality for the Kurds and their language. Since the new constitution requires a two-thirds majority in Parliament, and Mr Erdogan will not have that majority without the support of the main Kurdish party, the Peace and Democracy Party, both men can only get what they want if the deal goes through.

Long-lasting marriages have been built on less promising foundations. This time, at long last, Turkey may finally get around to recognising the rights of the 20% of its people who speak Kurdish. If it does, a long war will end, Mr Erdogan will gain enormous political credit - and a post-modern version of the traditional Kurdish dream will start to come to life.