Let's talk about how the city is changing 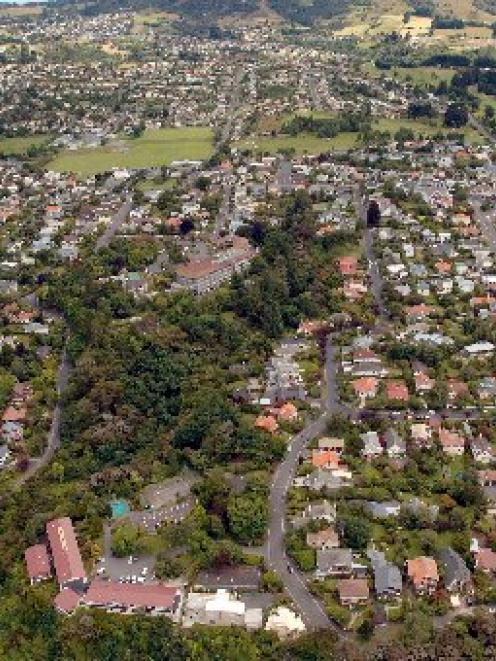 2006 snapshot of Dunedin: Maori Hill in census year. Photo by Stephen Jaquiery.
The new stadium, debt, water privatisation and fruit trees are some of the issues for the Dunedin election this year. However, we should also be talking about the changes to the structure of Dunedin itself that could prove to be greater challenges in time, suggests James Green.

Dunedin grew by 4000 people between 1996 and 2006, but the Census data shows three profound changes in how people in Dunedin were living.

"Student ghetto" intensification: The area between Stuart St and the Gardens had a 27% increase in population (3000 extra people) between 1996 and 2006.

The increase in those student-aged (15-24) was actually greater, as 360 people outside this age group left over the same period.

Non-student age people made up less than 17% of the residents of North Dunedin.

Rural and Taieri drift: Over the same period, the population of Mosgiel, Outram and semi-rural areas (parts of Otago Peninsula, the northern coast and the Taieri) increased by 2200.

The effect was not limited to the city; smaller built-up areas including Port Chalmers, Karitane, Waitati and Brighton also lost population, while the rural land surrounding them had population growth.

Through zoning and resource consent decisions, the council has permitted these changes.

More land has been subdivided.

In the university area, zoning regulations favour large multi-bedroom flats, and "studio" rooms because they require less parking and have lower rates costs than smaller apartments and flats.

These demographic changes are having wide-reaching influences on the city.

Student behaviour: Even postgraduate students are unlikely to be excited by a six-bedroom flat, let alone families or people outside the student demographic.

Public transport: Fewer people are living close to bus routes, so there are fewer who can take a bus.

Parking: Fewer people live in suburbs served by bus routes, thousands more people live further away and in semi-rural and rural areas, so more people will be driving into the city.

But there are also thousands more living around the central city, with more students than ever owning cars, putting even more pressure on parking.

Roading: As people move further from the middle of Dunedin, the demand for roads increases.

New roads such as the Fairfield motorway make it easier to live further away, so more people are living further away.

And as more houses are built down existing gravel roads, demand to have those roads sealed increases.

Infrastructure: Dunedin already has a large water and waste system with much maintenance needed.

Every new subdivision adds more kilometres of pipes that will need to be maintained.

What is the solution? Dunedin is an amazing and very liveable city.

However, serious thought should be given to changing the zoning rules.

Greater intensification should be allowed near suburban shopping areas, including the Gardens, Roslyn and Caversham, and along public transport routes.

Rural drift is a harder one.

I can see the appeal of living out of the city.

However, the more people who live in rural areas, the greater the burden on parking and transport, and also farming.

If we really want to do something about student disorder, changing the housing would be a good start.

Flats with more than four bedrooms often do not have the same sense of community as smaller flats.

Mixing higher quality small apartments back through the area - apartments that would appeal to staff, postgraduate students and other non-students - would also help.

These are just some suggestions, but this is something we need to talk about as a city.

Dunedin has a lot to lose.

- Dr James Green is a researcher at the University of Otago.