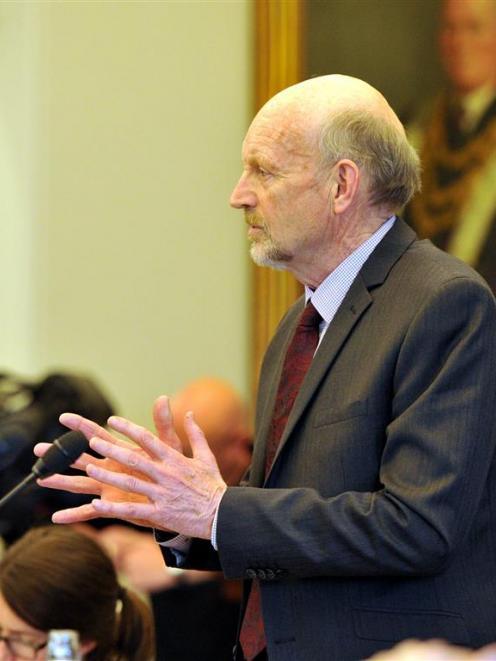 Cr Neville Peat speaks at a Dunedin City Council meeting in 2014. Photo by Gregor Richardson.
It's election year for local bodies, and from last Friday candidates' nominations are being received. In the interest of encouraging nominations, Neville Peat, a former regional councillor and retiring city councillor, describes his experience of life as an elected member of the Dunedin City Council.

For the past three years, people have been asking me: "How are you enjoying the council?''

My stock reply has been that "enjoy'' does not really sum up the experience.

Searching for alternatives, I might choose "stimulating'', "entertaining'' or even "fascinating''.

After a lengthy, challenging day attending meetings immersed in thick agendas, the term "endure'' might spring to mind.

Compared to the mainly environmental focus of the Otago Regional Council, where I spent nine years (three terms), the city council digs into just about every nook and cranny of civic life.

Annual plan hearings are classically all over the show as those making submissions rattle out what is bugging them . . . from pipes to playgrounds, dog poo to digital initiatives, social housing to street cleaning.

Councillors are not staff, as an editorial recently stated (ODT, 2.7.16). Councillors are classified by the IRD as "self-employed'', responsible for hiring only one member of staff, the chief executive.

They should not be meddling in operational or staffing issues.

But at times, reacting to complaints from citizens, they may be tempted.

Councillors who are not chairing a committee are paid a salary of about $54,000, (approximating the average annual wage in New Zealand).

There are scheduled council and committee meetings, workshops, regular briefings with council senior executives, annual plan meetings and a flurry of functions and events.

Much time is spent reading staff reports, background papers and appendices, emails (20 to 30 a day) and texts (similar numbers daily), and responding to inquiries from ratepayers.

Then there are the appointments to organisations beyond city hall.

I have had 10 of them during the current term in a range of different settings.

Here is a sampling: Otago Peninsula community board: The June meeting at the Portobello Bowling Club rooms lasted two hours with the heat pump going flat out.

First up, a student who received scholarship funding from the board for a voyage with the Spirit of New Zealand youth adventure sailing ship.

Next, a presentation from the Peninsula Biodiversity Trust about its groundbreaking possum-busting project.

The new police commander (Otago Coastal Area), Inspector Jason Guthrie, is here to explain his role, and he fields questions about tourist driving behaviour and the board's interest in retaining a police station at Portobello.

Otago Museum Trustboard: At the monthly meetings, two storeys up in the office area, we gather round a huge wooden table in the board room, where the museum's irrepressible director, Ian Griffin, lists recent achievements at the museum and his own not inconsiderable triumphs, including, at the last meeting, his forthcoming induction as an International Fellow of the New York-based Explorers' Club for his contribution to astronomy.

There are updates on the coming redevelopment of the science education space, Discovery World, and the Tangata Whenua Gallery.

Trust board meetings canvas a range of management issues to do with the royal albatross colony, visitor centre, observatory, configuration of the reserve's fences in relation to an expanding population of albatrosses, and the impact on staffing of a surge in the colony's size in recent years.

Besides the appointments to external organisations, a councillor can expect to be appointed to assorted panels, in my case four bylaw hearings panels with vastly different agendas to review rules for freedom camping, skateboarding, dog control and beauty therapists, tattooists and skin piercers.

I was also on the panel that recommended a local alcohol policy and new sites for bus shelters. Some of these appointments involve reading scores of submissions (387 in the case of the dog control bylaw).

The paperwork becomes formidable. For that reason and as a result of advances in digital technology, the council, through this three-year term, has been in transition to a computer-based information flow and, for that purpose, supplies a tablet (smaller than the ordinary laptop) and a mobile phone (not as smart as an iPhone).

At one annual plan process, the flood of submissions would have amounted to councillors being literally knee-deep in paper in the absence of the tablets.

In the course of a term, councillors may also be called on to stand in for the mayor and/or deputy mayor.

In place of Mayor David Cull, I had the privilege of officiating at one ceremony for new citizens that happened to coincide with the June 2015 flood.

Thirty-six of 40 prospective new citizens - an extraordinary turnout given the extreme weather - showed up as the rain was bucketing down, testimony to the significance of New Zealand citizenship.

Some of them even lived in flood-stricken areas of South Dunedin! My other mayoral stand-ins included welcoming 200 delegates to an international rhododendron conference and receiving the Commonwealth Games baton in the Octagon on St Andrew's Day 2013.

What all council candidates face for the 2016 election is a long list of contenders.

As usual, the mayor will be separately elected.

In the 2013 election there were 39 candidates nominated for the Central ward, an ungainly number at election meetings.

The "super ward'' is unlikely to have fewer.

Local Government New Zealand runs training sessions for new councillors that offer worthy advice, not the least a caution to newcomers to make sure to take holidays and weekends amidst the hurly-burly of city politics.

As for me, I intend to leave my seat to someone else and return to writing fulltime.

Among the topics I have in mind for a book topic is the largest environmental and socio-economic issue likely to face New Zealand and all of humanity in the 21st century - sea-level rise.

My book will consider projections for rising levels, the scientific evidence in support, and what the Government, councils and the insurance and finance sectors are doing - or not doing - to prepare for an invading sea.

Whereas democracy is looking a bit shaky in some parts of the world, it can work well at local level so long as the candidates represent a wide range of perspectives and citizens know the issues and exercise their vote.