Moment of truth as US caught in its lies 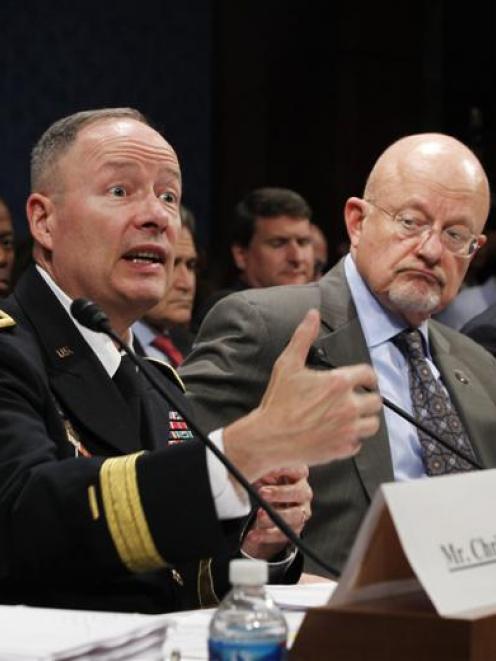 General Keith Alexander (second from left), director of the National Security Agency (NSA), testifies at a House Intelligence Committee hearing on Capitol Hill in Washington yesterday. Alongside Alexander are NSA deputy director Chris Inglis (left), US director of National Intelligence James Clapper (second from right) and deputy attorney-general James Cole.
Politicians and government officials rarely tell outright lies; the cost of being caught out in a lie is too high.

Instead, they make carefully worded statements that seem to address the issue, but avoid the truth.

Like, for example, Caitlin Hayden, the White House spokeswoman who replied last Thursday to German Chancellor Angela Merkel's angry protest at the tapping of her cellphone by the US National Security Agency.

''The United States is not monitoring and will not monitor the communications of Chancellor Merkel,'' she said.

Yes, Caitlin, but has the US been listening to Ms Merkel's cellphone calls from 2002 until the day before yesterday?

''Beyond that, I'm not in a position to comment publicly on every specific alleged intelligence activity.''

By Sunday, the argument had moved on. The question now was: did President Barack Obama know the chancellor's phone was bugged?

(The German tabloid Bild am Sonntag reported that General Keith Alexander, head of the NSA, told Mr Obama about it in 2010. Mr Obama allegedly said the surveillance should continue, as ''he did not trust her''.)

Now it was the turn of the NSA spokesperson, Vanee Vines, to deny the truth.

But she carefully avoided saying that Mr Obama had not been told at all.

The ridiculous thing about these meticulously crafted pseudo-denials is that they leave a truth-shaped hole for everyone to see. Of course the United States has been listening to Angela Merkel's phone calls since 2002, and of course Mr Obama knew about it. It would have been quite easy to deny those facts if they were not true.

The NSA is completely out of control. Its German outpost was brazenly located on the fourth floor of the US embassy in Berlin, and leaked documents published by Der Spiegel say the NSA maintains similar operations in 80 other US embassies and consulates around the world.

The Guardian, also relying on documents provided by whistle-blower Edward Snowden, reported recently that a total of 35 national leaders have been targeted by the NSA. We know that the German, Brazilian and Mexican leaders were bugged, but it's almost certain that the leaders of France, Spain and Italy, Egypt, Israel and Saudi Arabia, and Japan, India and Indonesia were also targeted. Not to mention Russia and China.

A computer with a series of numbers and the logo of the United States' National Security Agency (NSA) is seen in this multiple-exposure picture taken in Frankfurt this week. Photos by Reuters.
The only one of the NSA's high-level victims to speak out yet, apart from Angela Merkel, is President Dilma Roussef ,of Brazil. Last month, she told the UN General Assembly: ''Personal data of [Brazilian] citizens was intercepted indiscriminately. Corporate information - often of high economic and even strategic value - was at the centre of espionage activity ... The office of the president itself had its communications intercepted.''

''Friendly governments and societies that seek to build a true strategic partnership ... cannot allow recurring illegal actions to take place as if they were normal,'' Ms Roussef concluded.

And you wonder how the brilliant, power-drunk fools at the NSA could possibly have believed they could get away with this kind of behaviour indefinitely.

The 4.9 million (!) Americans with access to classified information include 480,000 civilian contractors with the same ''top secret'' security clearance as Mr Snowden. Even if all the military and public servants could be trusted to keep the NSA's guilty secret forever (unlikely) and only one in a hundred of the contractors was outraged by it, then there were still 4800 potential whistle-blowers waiting to blow. If Mr Snowden hadn't, somebody else would have.

When the astounding scale and scope of the agency's operations finally came out, it was bound to create intense pressure on Washington to rein in the NSA. The agency can deflect the domestic pressure, to some extent, by insisting that it's all being done to keep Americans safe from terrorism, but it can't persuade the president of South Korea or the prime minister of Bangladesh that she was being bugged because she was a terrorist suspect.

The NSA's worst abuse has been its violation of the privacy of hundreds of millions of private citizens at home and abroad, but it's the pressure from furious foreign leaders that will finally force the US Government to act.

''Trust in our ally, the USA, has been shattered,'' German Interior Minister Hans-Peter Friedrich said.

''If the Americans have tapped mobile phones in Germany, then they have broken German law on German soil.''

This will end up in the German courts, and probably in those of many other countries as well (and Mr Snowden may well end up being granted asylum in Germany). To rebuild its relations with its key allies, the White House is going to have to radically curb the NSA's powers.

Good. We don't have to listen to the spooks and their allies telling us that since the new communications technologies make total surveillance possible, it is therefore inevitable.

''If it can be done, it will be done'' is a counsel of despair. Most of the NSA's ever-expanding activities over the past 10 years have served no legitimate purpose, and it's high time that it was forced to obey both the letter and the spirit of the law.