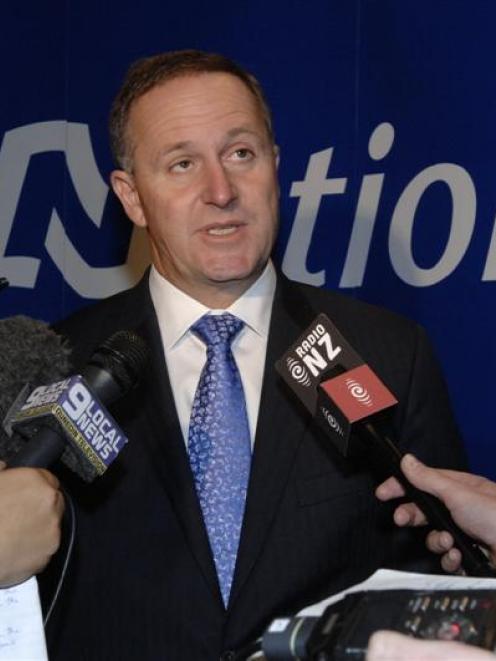 Prime Minister Rt Hon John Key answers questions from media after talking at the National Party Conference at the Forsyth Barr Stadium. Photo by Otago Daily Times.
If rather too much is being made of the Government's supposed current woes, that is probably because, in general, it had such an easy ride for its first three years.

For most of that time, members of the National-led administration could do no wrong, neither Prime Minister John Key nor his ministers. A trawl back through the pages of its first-term history, however, would reveal incidents which, in a less forgiving climate, might have led to popularity reversals and possibly even resignations.

Imagine, for instance, the fuss - and the political fallout - were it revealed today that a high-ranking Cabinet minister had seen to it that private and confidential departmental information on individuals was accessed and broadcast nationally to score partisan political points.

Or that another high-flying Cabinet minister had allegedly misled Parliament by "forgetting" about a pertinent communication from a commercial entity involved in state infrastructure overtures.

The facilitation of the publication of information under the watch of Social Welfare Minister Paula Bennett - details relating to two beneficiaries, who had criticised Government policy - is now but a mere pause, a semicolon in the fluent narrative of National's first term, as is Steven Joyce's memory lapse over a politically significant letter from Telecom regarding its structural separation.

It's all about context. When you are fresh and popular, you can do no wrong. Political confidence is self-perpetuating. But, typically, the first 18 months of a second-term government is when it will do the political hard yards. Thereafter it will be intent on smoothing over any wrinkles in preparation for a third term.

So a degree of electoral discomfort is to be expected as the Government gets down to its serious business. This can easily be overstated. As Mr Key himself has pointed out, the support for the National Party in recent polls is where it was when it went into the last election.

Even so, it has made a pig's ear of some recent major initiatives, finding itself uncharacteristically out of step with the electorate. While personally unaffected by plans to restructure the Ministry of Foreign Affairs and Trade, some centrist voters will not have been impressed by this ill-thought-through fiasco.

Likewise, many among the same bloc may have been somewhat perturbed by the tenor of Ms Bennett's chewing the fat with an increasingly shrill talk-back controversialist - over what to do about "breeding" and the underclass.

Subsequent commentary overhyped this into talk of eugenics - which it was not - but nonetheless many might expect that the "uncomfortable conversation" this country must have about welfarism and child abuse be conducted in more considered ways by a minister of the Crown.

The equilibrium of Ms Bennett's vast and money-hungry fiefdom cannot have been improved by the abrupt departure of the head of Work and Income last week after less than a year in the job.

Janet Grossman was recruited to the role from the UK. She leaves ostensibly for "family reasons", but it is pertinent to wonder whether, in this instance, the phrase has a euphemistic undertow: did Ms Grossman understand when she took the job she would be answerable not only to the chief executive and the Social Welfare minister herself, but also to an additional Government-appointed welfare reform board led by Paula Rebstock?

Or did she commit a career-damaging faux pas in being so forthright when five Winz workers were sacked in December last year for accessing clients' private information: "These people have let us down badly.

"Their actions cast a shadow over our honest and hard working staff who understand that client privacy is sacrosanct," she quite properly said at the time.

The Government's most awkward reversal has been the class sizes blue.

No question, education is critical. No question, good teachers can make all the difference - we all know that through our own experiences and that of our children. No question, we need to invest in this vital sector and, yes, to do things better and smarter, including weeding out the time-servers.

But this initiative was so poorly handled in so many ways it will probably be a case study for students of political science for semesters to come. That includes its unravelling.

Education Minister Hekia Parata might have "sold" it better, but let's not pretend that, relatively new to the job, it was all her idea.

Again, that middle rump of switched-on voters can smell political cowardice and expediency when they see it, and chances are they can sense it in this case: Mrs Parata was given a particularly wayward hospital pass by her senior Cabinet colleagues, then hung out to dry when it failed to stick.