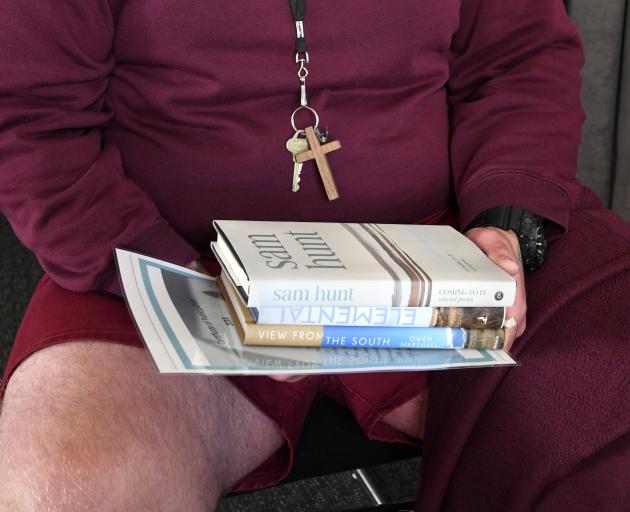 One of the winners of the Otago Daily Times inaugural prison writing competition in 2018 displays his winning books. PHOTO: CRAIG BAXTER
A local commitment to fostering writing talent must be applauded, Tony Eyre writes.

Behind the bars of the Otago Corrections Facility, the creative juices of prison inmates are once again being given the opportunity to express themselves in the wider community with the return of the successful Otago Daily Times prison creative-writing competition.

There is an old wisecrack saying, “We all have a book in us and that’s where it should stay.”

Fortunately, that old piece of advice is quite rightly ignored, and initiatives like the New Chapters 2021 Writing Competition for prisoners, need to be applauded.

Indeed, it is quite fitting that this competition is being held in the same month that the Dunedin Writers and Readers Festival is celebrating the creative instinct in the expression of the written word.

As an avid reader and collector of New Zealand literature, I’ve long been aware of the contribution that the Otago Daily Times has made to supporting writers through its sponsorship of writing competitions to celebrate notable milestones in the region’s history.

In 1948, during the celebration of the centenary of Otago, the newspaper ran a historical novel competition with the winner to receive a prize of £200 and a publishing contract with Whitcombe and Tombs Ltd. Out of 67 entries, first place went to Georgina McDonald’s Grand Hills for Sheep which tells the story of a pioneering family from Scotland who settle and take up sheep farming in South Otago in the 1840s.

The novel went on to be a best-seller, with 15,000 copies sold from multiple reprints.

The Otago Daily Times again showed its commitment to New Zealand literature when sponsoring a Centennial Novel Competition in 1961 to celebrate 100 years since the newspaper was first published. The prize-winning novel was Christchurch author Errol Brathwaite’s An Affair of Men. Brathwaite flew Lockheed Ventura bombers in the Pacific in 1944 and his novel, set in Bougainville during the war, drew heavily on his own wartime experiences.

Auckland journalist, Pat Booth picked up the second prize with his “first man in space” novel, Long Night Among the Stars.

Both of these highly regarded novels were published in hardback by Collins, and both can easily be picked up today in any of Dunedin’s leading secondhand bookshops.

I have a nice, signed copy of Brathwaite’s first-prize winning book and an ex-library copy (from the former Seacliff Hospital library) of Booth’s runner-up novel.

Its 1861 co-founder and future premier, Sir Julius Vogel, wrote his prophetic and futuristic novel, Anno Domini 2000; or Woman’s Destiny, back in 1889. The book is the inspiration for the annual Sir Julius Vogel Awards for science fiction writing.

And Benjamin Farjeon, prolific novelist, journalist and father of the famous English children’s writer, Eleanor Farjeon, wrote his first novel, Shadows on the Snow: A Christmas Story, while co-editor of the Otago Daily Times in 1864.

While it may no longer be viable for New Zealand’s oldest daily newspaper to be sponsoring literary prizes for grand-scale centennial events, it is encouraging to see that in 2021 — the year of its own 160th anniversary — the newspaper continues to foster local writing talent and sponsor literary events, especially apt with our pre-eminent position as a Unesco City of Literature.

- Tony Eyre is a Dunedin writer.

"Newspaper has proud history of supporting literary talent" maybe back then but now with cancel culture prevalent not so much.