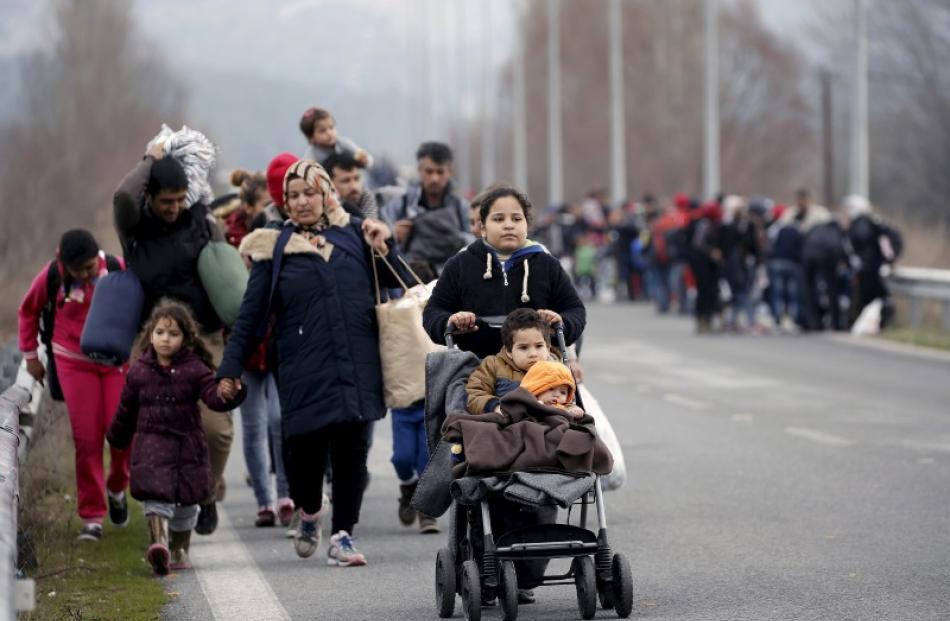 On the move ... Hundreds of mainly Iraqi and Syrian refugees walk on a motorway towards the Greek-Macedonian border near the Greek village of Idomeni last month. PHOTO: REUTERS

Let's be clear: refugees aren't fleeing poverty, they're fleeing war and persecution. At present they make up less than 2% of net immigrationDunedin should be reassured by the quota system for refugees, Murdoch Stephens writes.

From May, Syrian refugees will begin to arrive in Dunedin. But anyone thinking that the chaos of the refugee crisis in Europe will play out on George St can be reassured.

The most basic distinction is that in Europe refugees arrive as asylum seekers, while the majority of refugees arrive in New Zealand under a quota administered by the United Nations.

Asylum seekers take their own fate into their hands, making a dangerous and difficult journey across borders and oceans. This is a perfectly legal and accepted form of seeking sanctuary as enshrined in international law. New Zealand receives fewer than one asylum seeker application per day.

Genuine refugees seeking basic protection simply can't get here. Compare that with Austria, which was recently criticised by a European migration commissioner for trying to limit asylum seekers to 3200 per day. It takes 10 years, not one day, for that many asylum seekers to pass through New Zealand's system. On top of that we reject almost two-thirds of their claims for protection. The large number of refugees crossing into Europe in the past year has led to some false impressions about our own refugee intake.

Because New Zealand receives so few asylum seekers, we go out to the world to source an annual quota of refugees from the countries that surround trouble spots. We are joined in using a quota system by other countries that receive few refugees as asylum seekers - Canada, the United States, Australia and, to a lesser extent, parts of Scandinavia.

We're the only country in the world that receives fewer applications for asylum than we take via a quota system. This means that the refugee journey to New Zealand is remarkably different from the overland and boat journeys we see on the news.

It would take a heroic feat of one-eyed nationalism to claim New Zealand was outperforming Germany at accepting refugees. And yet the myth of New Zealand doing its fair share persists. The New Zealand Herald recently published a graphic that only measured countries by their refugee quota, placing New Zealand above an absent Germany. To be fair, the bulk of the article contained some reference to "recognition and resettlement" statistics, which are a fairer measure of contribution.

But the impression of a casual reader would be set: we're not too bad, we're a world leader. I'm proud of the groups in the 1970s and 1980s that led to the formulation of an annual refugee quota as a way for New Zealanders to make up for our tiny inflow of asylum seekers.

We could have sat back and accepted no-one. But that is not the New Zealand way. The benefits of the quota system are numerous. New Zealand, along with the UN and the Five Eyes countries, pre-screens all the people who come here through the quota.

This level of scrutiny, as well as the years of waiting, is not something that people would put themselves through if they had bad intentions. Who gets accepted in our quota is decided by our government in accordance with the United Nations - people cannot apply to come here, and it is next to impossible for New Zealanders to request that specific people who are registered as refugees come here.

The quota system also allows us to focus on those most in need: one-fifth of our quota in recent years came in as women at risk, and Immigration NZ aims for 95% of people to come as part of a family unit. We've also shifted our focus to Asia-Pacific in the past two terms of government and this has meant that Burma and Bhutan have been our first and second-largest source countries for refugees in that time.

If you read some of the comments on articles, you might imagine refugees are all unscreened, single men in their teens and 20s. Or perhaps you'd think that a much higher percentage of our net immigration level of 63,000 people are refugees. But let's be clear: refugees aren't fleeing poverty, they're fleeing war and persecution. At present they make up less than 2% of net immigration.

It's not wrong to feel fear of the unknown, but I'd hope people would be willing to look closer at the people who come in as refugees to New Zealand and the strict criteria we use to make sure only those most in need receive our protection.

●Murdoch Stephens leads the Doing Our Bit campaign to double New Zealand's refugee quota. He speaks about that campaign in association with the national Centre for Peace and Conflict Studies at the University of Otago tomorrow at 6pm in Archway Lecture Theatre 2.