O stands for ... anything but O Week, please 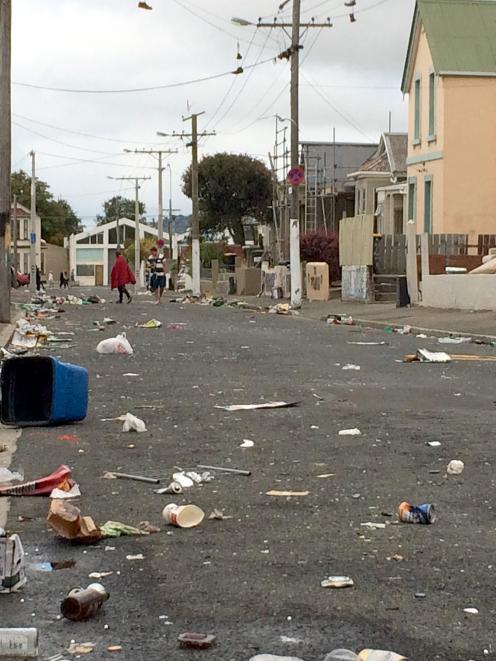 Hyde St on Sunday morning. Photo by Hamish McNeilly
Summer is almost over. When I woke up at six o'clock this morning it was still dark.

I had to wear a jacket on my walk to work.

It seems appropriate that the loss of light is accompanied by a deluge of students making their way back to Dunedin for Orientation Week - the most anticipated week of the year for anyone who doesn't have to call Dunedin home between semesters.

I'm not sure if it's just that I don't like people having a good time when it's not my idea of a good time or if I am just generally opposed to good times, but I'm grumpy and horrible about Orientation.

After a peaceful summer, students traipsing around town in herds bearing clothes racks give me chest pains.

I am a student. I do student things.

I'm irresponsible with my time and money and recreational activities.

But I don't understand student culture.

Obviously, the university is the backbone of Dunedin's economy, and I can grudgingly admit that students who move here to study do inject a certain life into this sleepy city.

Without students the city would be dull but if there is a time to complain about irritating rowdiness then Orientation Week is that time.

My understanding of Orientation Week is that it serves as a kind of set period during which people are initiated into student life.

Student life, in this case, seems to be some mythological ideal of simultaneously striving to create enough memories to serve you well for the rest of your life while not retaining any actual recollection of what happened.

In being so determined to have a good time people often do things that they normally wouldn't do.

In most cases it's pretty normal to outdo yourself to impress new friends, or to gain the approval of your contemporaries.

But at university there seems to be a slightly warped understanding of what being out there and impressive means.

Yesterday, I read a desperate plea on Facebook; a Hyde Street resident seeking to find out who had gone to the bathroom through their window.

I try not to think of the number of similar complaints I have come across since I started university in 2012.

I am glad that I live too far above the ground for this to be a pressing concern.

I am (moderately) worried that it is even something worth thinking about.

Mostly, I am apathetic. I am pretty sure I have never had a close relationship with anyone who would partake in this kind of posturing, but my flatmate seems to think this sort of behaviour is situational.

You leave school, you're nervous about living in a hall of residence and you don't know how to party with any semblance of responsibility.

You don't want to be the odd one out and so you find yourself emptying your bowels over someone's skylight.

You don't even want to do it, you don't really know why you said you would but you'll be a legend for the next three years of your undergraduate commerce degree if you do and so, maybe, it'll be worth it.

Personally, I am not convinced I could ever feel insecure enough to leave such a token of my scarfie enthusiasm.

This time of year also seems to be when students are the most divided by gender.

When I think of Orientation Week I think of boys running around yelling at each other, guzzling canned beer, burning couches and harassing women on the street.

While official Orientation events seem to be pretty equally attended by men and women, the parties in studentville seem to be just lads having fun with the lads and if you're not a lad you're fair game.

I might be exaggerating about how awful Orientation Week is.

It's not too hard to avoid if you never leave the house and sleep wearing chainsaw earmuffs, while clutching a broom to fend off would be invaders.

Millie Lovelock is a Dunedin student.