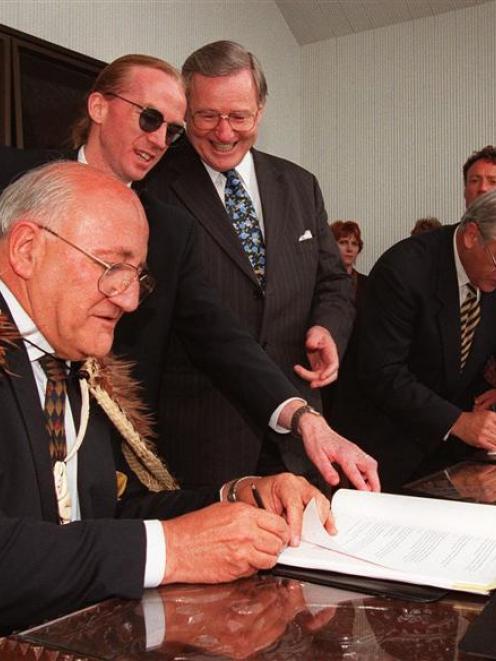 While South Island tribe Ngai Tahu is demanding more than the $68.5 million top-up paid this year under the relativity clause of its 1998 settlement, the Government could demand the return of the $170 million paid in 1998 on the grounds that it was paid in error.

Ngai Tahu has entered arbitration with the Crown over interpretation of the clauses that detail how the relativity payment should be calculated, according to news reports. The Ngai Tahu agreement, like that of Waikato-Tainui, was reached in an environment in which the Government argued all Treaty settlements should total no more than $1 billion, with the settlement cap called a ''fiscal envelope''. The relativity clause of the Ngai Tahu settlement specified the tribe would receive 16.1% of anything paid to other tribes that exceeded $1 billion in 1994 dollars.

After much prompting, the Government conceded the $1 billion mark was reached in June last year. Ngai Tahu pocketed the $68.5 million and reserved the right to dispute the amount. Both Ngai Tahu and Waikato want to ensure this first top-up is set at the highest possible payment because a lot more money is coming to them.

The first top-up derives from the 37 settlements completed to June 2012, totalling about $1.6 billion.

With 23 awaiting legislation, 17 in detailed negotiations, six in negotiations, and a number in pre-negotiation, according to the Office of Treaty Settlements website, Treaty settlements are probably less than halfway through.

If the 46 uncompleted settlements total a further $1.6 billion, Ngai Tahu stands to pocket a further $257 million as a result of the relativity clause of the 1998 ''full and final'' settlement negotiated by Sir Douglas Graham and Sir Tipene O'Regan, with current Treaty Negotiations Minister Christopher Finlayson as Ngai Tahu's legal counsel.

Ngai Tahu Holdings Corporation chief executive Mike Sang told Fairfax ''we would have been materially better off financially if we had been paid the right amount at the beginning.''

In fact, most of the South Island was sold by Ngai Tahu and other chiefs in Australia before the Treaty of Waitangi was signed, and Governor William Hobson's undertaking to investigate pre-1840 sales opened the way for Ngai Tahu to sell the South Island all over again. Ngai Tahu does not want the public to know the tribe has squeezed five ''full and final'' settlements out of successive governments over a trumped-up dispute over one aspect of one land transaction.

The return of freed slaves from the North Island pressured chiefs to seek more land from the government. So Ngai Tahu complained about alleged inadequacy of reserves in the 8.9 million ha Kemp purchase in 1848.

An inquiry in 1868 into these reserves meant a further 1995ha were granted. This was the first settlement. Although happy in 1868 with the settlement, Ngai Tahu started to argue the award should not be regarded as final. Continued complaints led to the South Island Landless Natives Act 1906, which granted 57,652ha to settle 4063 ''landless'' Maori.

This was their second settlement.

Complaints continued. The Native Land Claims Commission was appointed in June 1920 to investigate 11 petitions and claims by Maori in different parts of New Zealand, including that of Ngai Tahu regarding the Kemp block purchase.

The Ngai Tahu Claim Settlement Act 1944, one of a series of grievance settlement Acts by the Labour government, awarded 300,000,

payable at a rate of 10,000 a year for 30 years. This was Ngai Tahu's third settlement. Annual payments to Ngai Tahu were scheduled to end in 1973, at which time allegations emerged that the 1944 settlement had not been widely discussed or accepted. Southern Maori MP Whetu Tirikatene Sullivan rejected those claims.

Nevertheless, payments of $20,000 a year in perpetuity were awarded to Ngai Tahu in 1973, the tribe's fourth settlement.

Once the Treaty of Waitangi Amendment Act 1985 enabled inquiries into claims back to 1840, Henare Rakiihia Tau, supported by the Ngai Tahu Maori Trust Board, revisited all of Ngai Tahu's old issues and more, resulting in a further $170 million payout in 1998, the tribe's fifth settlement.

While Ngai Tahu demands bigger top-ups, the repeated settlements show it has been playing successive political leaders as fools. The current Government could demand the return of the $170 million paid to the tribe in 1998, plus interest, as well as the return of the recent $68.5 million top-up.