Opinion: NZ Post is ours, but you wouldn't know it

The corporate leadership of New Zealand Post and their political masters are not taking us seriously, writes Victor Billot. 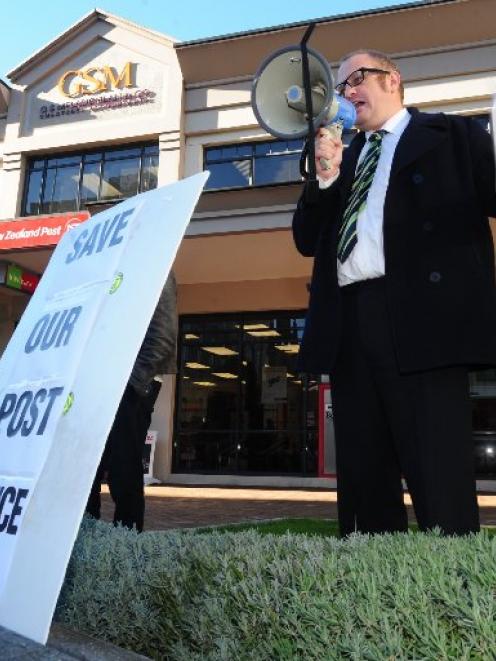 The one thing I didn't feel is any surprise. The only surprise in this situation is why everyone is acting surprised.

The warning signs from NZ Post HQ have been flashing loud and clear.

Two years ago, I was part of a small group who organised against the closure of the Dunedin Metro Post Shop in the Exchange.

We had small but lively protests. We collected thousands of signatures outside the post office. We had a website and Facebook page. We had a delegation who met the mayor. We campaigned with some great local people, from beneficiaries to business owners. We lost.

Our efforts may have helped ensure some threatened jobs were redistributed around the city, but the post shop closed.

While the person in the street - the average customer - was hopping mad at the time, the city institutions that should have been snapping into action were moribund, and had to be tickled into action.

Some of our leaders seem to be hypnotised by NZ Post CEO Brian Roche and his bland assertion that reduction of core postal services is to ensure the future viability of his ''business''.

Let me be quite clear. Whether or not this is true, the business model of NZ Post is not the priority of Dunedin leaders. Dunedin's interests should be their priority.

It is now dawning that the post office closure was just the first step in a much greater journey.

The closing of the retail outlets around the country was a trial run for the wholesale dismantling of the postal service.

South Dunedin has had two hammer blows with Hillside and now the mail processing facility.

Both these hits have been political choices, not economic necessities.

In the interests of staying positive amongst this grim harvest, I have some constructive advice to offer.

Following the closure of the Metro branch in 2011, one of our group members applied to NZ Post under the Official Information Act for all correspondence regarding the closure.

The resulting stack of papers was a revelation.

It provides an insight into what will be going on inside NZ Post management at this very moment.

The first point to understand is that NZ Post is spending serious money on the manipulation of public opinion.

The documents obtained from NZ Post in 2011 show a concerted effort to undermine community resistance to their corporate agenda.

Local managers were spying on protest actions and narking back to HQ, communications staff were ''managing'' the media, and political opposition was carefully neutralised.

The second point to appreciate is that as far as NZ Post goes, this decision is already made.

Despite the hot air of their Statement of Corporate Intent which grandly promises to ''consider the impacts of our business on the communities in which we operate'' and ''engage with our community stakeholders'', any ''consultation'' or ''community engagement'' they talk about might as well be printed on loo paper.

Thirdly, the management of NZ Post have a strange attitude to the community they seek to engage with.

We uncovered many documents through the OIA devoted to analysing the activities of our small group as well as other local leaders.

For example, NZ Post Corporate Affairs spokesman Peter Fa'afiu emailed other managers on May 31, 2011, about a letter he had received from Dunedin Mayor Dave Cull.

Mr Fa'afiu wrote (in reference to our mayor's concerns) ''the letter was expected. He needs to be seen to do something.''

In the same letter, Mr Fa'afiu goes on to ask, ''Bill, on that, do you already have someone at the DCC who has been helpful in the past? I just want to mention a name to reassure Dave [Cull] we are thinking about these issues.''

In other correspondence on the campaign by NZ Post bigwigs, an email is entitled ''example of how `they' react'' (referring to customers), someone emails that having to write a letter to a customer is a ''pain in the backside'', and there are references to ''emotional protesters'' and ''our petitioners'' including a ''little old lady'' collecting signatures while letters to the ODT are ''pleading'' for the retention of the store.

NZ Post is not the property of a private group of shareholders. It is owned by all New Zealanders. It's ours, but you wouldn't know it.

If we want to win this fight, we have to fight hard and fight fast.

This is about jobs, services and the responsibility of a public enterprise to the public. In any battle, advantage goes to those with the initiative, so we are on the back foot already.

The big mistake would be to make this a parochial rather than a political issue. The profit-making model of these public enterprises is the villain here, not workers in Christchurch.

The next step will be further casualisation of jobs and outsourcing of business, and, when profit levels are guaranteed for the incoming owners, privatisation.

One thing is clear. The corporate leadership of New Zealand Post and their political masters are not taking us seriously.

We can keep getting kicked around and just grin and bear it, or we can go hard out to get our way. This will involve a serious campaign, not just chest-beating, and the time to start was yesterday.

- Victor Billot was spokesman for the 2011 campaign to save the Dunedin Metro Post Shop and Kiwibank.