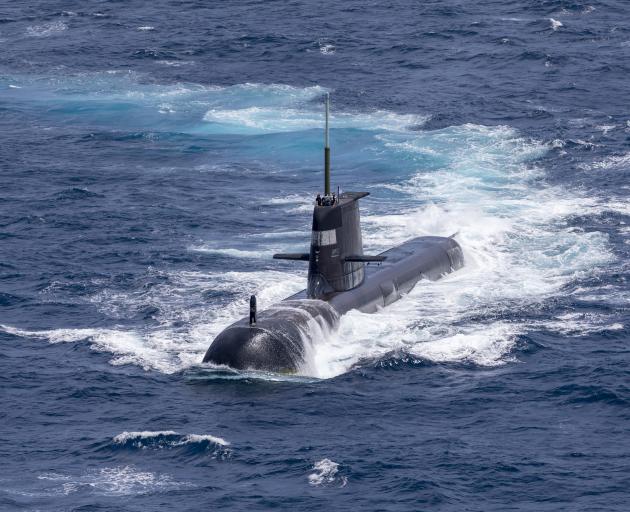 The Royal Australian Navy submarine HMAS Rankin is seen during a maritime exercise between the Royal Australian Navy and the Indian Navy earlier this month in Darwin. PHOTO: GETTY IMAGES
The announcement of the Aukus partnership should not lend itself to shallow political discussions. It is a chance for Australia to promote basic research for tomorrow’s technologies, writes Dr Murat Ungor.

And so, friends, Aukus is born.

The United Kingdom, United States and Australia announced a new partnership in the Asia-Pacific. The first major initiative of the alliance, known as Aukus, will be to deliver a nuclear-powered submarine fleet for Australia.

There are six countries in the world which have such submarines: the US, Russia, China, the UK, France, and India.

Australia intends to build these submarines in Adelaide, in close co-operation with the UK and the US. The Australian government has cancelled a 2016 contract for 12 diesel-powered submarines signed with France.

The initial reactions to this new pact have been centred on the shift in the global balance, since China has emerged as the most important factor in East Asia. Surely, Aukus will have geopolitical and international security implications. And yet there is another aspect of the recent announcement of the Aukus coalition that should not be overshadowed by the heated international relations debates.

This new pact can bring new opportunities regarding the investment for the 21st-century technologies. UK Prime Minister Boris Johnson stated that "this will be one of the most complex and technically demanding projects in the world, lasting for decades and requiring the most advanced technology". The technological co-operation will focus on "cyber capabilities, artificial intelligence, quantum technologies, and additional undersea capabilities".

Australia is one of the first countries with an understanding of the importance of quantum ecosystem for the future.

A 2040 vision for Australia’s quantum industry

The Commonwealth Scientific and Industrial Research Organisation (CSIRO) is Australia’s national science agency. CSIRO published a very important report in May 2020, "Growing Australia’s Quantum Technology Industry". The central message of the report is very clear: "With sustained investment and collaboration across the sector we can grow our workforce, strengthen translation, and build businesses to generate over $4billion [$NZ4.1billion] and 16,000 jobs for Australia by 2040."

The report discusses that if Australia can capture 5% of the estimated addressable market for quantum computing in 2040, it could generate $A2.5billion in revenue. Australia’s quantum computing industry could create 10,000 jobs and associated productivity gains under this scenario.

Quantum computers work in a fundamentally different way from classical machines: a classical bit is either a 1 or a 0, but a quantum bit, or qubit, can exist in multiple states at once. Applied mathematician Peter Shor came up with a quantum algorithm that calculates the prime factors of a large number, vastly more efficiently than a classical computer. His 1995 paper showed how to make quantum information more robust. In 2019, Google showed that its 54-qubit quantum computer could solve a problem that would take impossibly long on a classical computer.

Qubits are often made of the same semiconducting materials as our everyday electronics. American chemist Danna Freedman, who has been working on developing new ways to synthesise tailor-made molecular qubits, says that "In terms of quantum computing, we’re in an era called the noisy intermediate-scale quantum or NISQ. There are certain classes of problems that we can look at with these early quantum computers, but it’s not necessarily the type of problem that is of the largest interest to the general public. I think it will take a couple of decades to access societally transformative problems".

A policy brief published by the Australian Strategic Policy Institute this year, "An Australian strategy for the quantum revolution", shares the view of Danna Freedman that we can’t simply assume that new tools and systems will automatically be in the public interest. The policy brief discusses that the quantum computer presents a potentially dazzling range of applications. They include quantum chemistry simulation that will accelerate drug development, improved supply-chain optimisation and supercharged artificial intelligence.

The Covid-19 pandemic has shown us all too clearly the fundamental importance of basic research.

According to the National Science Foundation, basic research "is experimental or theoretical work undertaken primarily to acquire new knowledge of the underlying foundations of phenomena and observable facts". People should change their perception that basic research is useless. Without fundamental basic research, there will be no good applied research.

A recent important research article by Ufuk Akcigit, Douglas Hanley, and Nicolas Serrano-Velarde, published in the Review of Economic Studies this year, finds evidence that policies geared towards public basic research and its interaction with the private sector are significantly welfare-improving.

"An Australian strategy for the quantum revolution" offers that "The Australian Government should also immediately lay the groundwork for a post-Covid-19 $15billion technology stimulus that should include a $3billion-$4billion investment in quantum technologies. The stimulus would be a game-changer for Australia and help the country diversify and deepen its technological and R&D base".

Aukus offers tremendous opportunities to Australia. Here we are talking about co-operation and learning opportunities for the most advanced technology. We cannot think technology separate from basic research. Channelling more resources to the basic scientific research of tomorrow’s technology will be beneficial for long-term growth and productivity for the Australian economy.

- Dr Murat Ungor is a senior economics lecturer at the University of Otago.